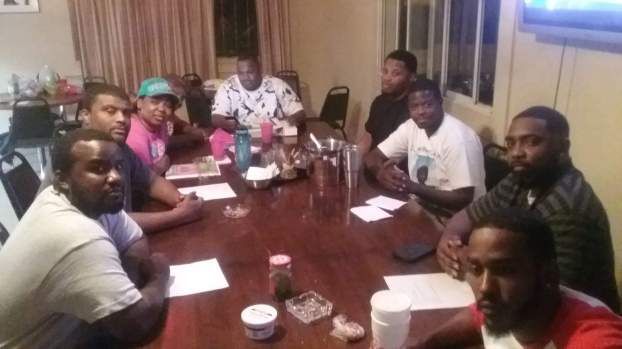 Photo courtesy of #MakeItHappen A group of friends meet for a #MakeItHappen meeting. At this meeting, the group decided to organize a Kick Ball Tournament. The games are at Simmons Fields located at the corner of Simmons Drive and Green Ave. in Orange. Registration is at 12 Noon with the first game at 1 p.m.

Group bringing families together for a good cause

A race between friends followed by a rechallenge has led to a new organization #MakeItHappen.

Recently, neighbors joined together for the Neighborhood Olympics. The success of the event led to the formation of #MakeItHappen, an organization in the process of becoming a non-profit group.

“We expected maybe 50 people for the Neighborhood Olympics,” Jason Platt said. “300 people were there.”

A group for helping people help each other is about bring the community7 together and also a fundraiser at the same time.

“It is a good combination,” Bianca Garrett said.

Platt said it is about a group of people from different parts of Orange coming together.

“I have thought about this over the last year,” Platt said. “After the Olympics, the time is right.”

Platt is familiar with reaching out to help others.

“He helped rescue people during the flood in March,” Garrett said.

“I rode up on my boat and would bring chips and soda, if that is what they needed,” Platt said. “I boated from 10th Street to Simmons Drive.”

He also would ride by homes of friends to take a picture and keep them updated on the situation.

“I had 450 friend requests in one day doing that,” Platt said. “It just took off from there.”

“Flag football may happen,” Platt said. “It is for the kids to see adults having fun outside. Money from the fundraisers to help families in need such as if the need school uniforms, or school supplies. Maybe they are hungry and we can take them to McDonald’s now. We want to do it right now at that moment.”

Platt said prior to the challenge of the race, he had not run in 15 years.

“I was happy it happened,” Platt said. “I was sore the next day.’

Garrett said change is already happening for one person.

“One young man at the Neighborhood Olympics said it opened his mind to one day try for the actual Olympics.”

Sunday, the organization is holding the inaugural Bi-Annual Kickball Tournament at Simmons Fields located at the corner of Simmons Drive and Green Ave. in Orange.

Registration is at 12 Noon with the first game at 1 p.m. A $10 entry fee is required for each team. A minimum of nine and no more than 12 per team.

Along with the games, chili dogs, links, and pork chop sandwiches will be available.

“I am the cook, the game organizer and the rule maker,” Platt said laughing.

He also added, “When something happens, we can’t let it kill the positivity. We have to keep things like this rolling.”

Along with bragging rights, the winning team will also win a traveling trophy donated by Chystal Horn.

Special to The Leader   The weather was nice and the turnout was great this past Tuesday, October 4, 2016,... read more