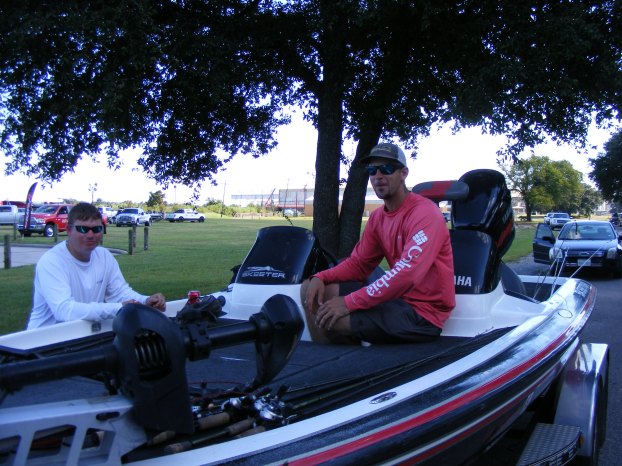 Bobby Tingle/The Orange Leader David Doonan and Weston Brown from College Station, TX, are here for the Bass Champs Team Championship, October 8 and 9, 2016 on the Sabine River in Orange. Blast off time is 6 a.m. and weigh-ins are from 3- 5 p.m. See more photos at http://photos.orangeleader.com/

Basschamps Fishing Tournament is this weekend at the City of Orange Boat Ramp with blast off at 6 a.m. or first safe light and weigh ins are from 3-5 p.m. on Saturday and Sunday.

The Greater Orange Area Chamber of Commerce is hosting the event.

Registration for the tournament was on Friday.

David Doonan and Weston Brown from College Station, Texas, are here on Friday for the competition.

After two practice days Doonan felt like it would be a tough tournament.

“We saw plenty of Redfish,” said Doonan. “Whoever wins this tournament will have to work hard.”

Anglers were treated to dinner at the event site Friday evening. Event organizers expected as many as 250 two-man teams to enter the competition.

Hundreds of anglers are already in town pre-fishing and begin the tournament Saturday, according to the chamber.

First prize for the anglers who reel in the prize weight is a Skeeter FX-20 Yamaha 250 SHO. Second place team will win a Skeeter ZX 225-Yamamha 225 SHO.

To qualify the anglers must enter all four events in one region or enter five team events in 2016.

The anglers are limited to connecting waters from the City of Orange Boat Ramp and no competitor is allowed to enter the Gulf of Mexico for the event.

Local civic leaders and sportsman frustrated over the “one size fits all” regulation for largemouth bass suggested this change. Representative Dade Phelan filed and passed HB 1979 out of committee and onto the floor for a vote. At that point, Texas Parks and Wildlife Department offered to perform a detailed scientific analysis of the waters in Southeast Texas in lieu of legislation and committed to the new rule if the results justified modification. Their examination concluded that 12 inches is the appropriate size for harvesting largemouth bass for this area.

– Bobby Tingle contributed to this story.