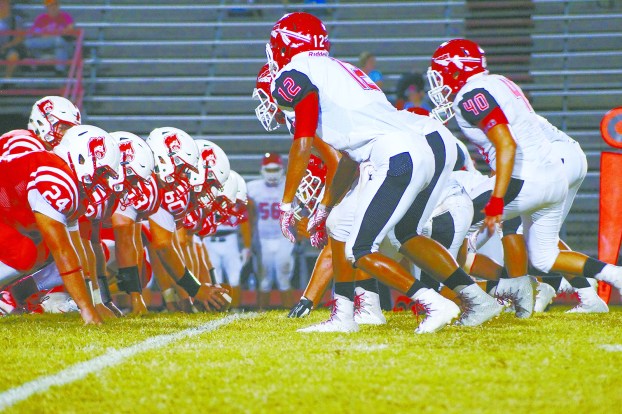 BRIDGE CITY – Welcome back to football Bridge City Cardinals.
Well, the Cleveland Indians may have not had those same feelings when they loaded up the buses after Friday night’s District 10-4A Division I opener at Ward Stadium at Bridge City High School.
After three weeks of not playing someone in a different jersey, the Cardinals showed very little rust as they blitzed the Indians 42-3.
The Cardinals (3-2, 1-0) wore down the Indians (2-4, 0-1) with plenty of power with the running game.
Bridge City raced to a 28-3 lead at the half. The Cardinals piled up 16 first downs in the first 24 minutes and quarterback Byron Trahan scored on four short touchdown runs.

The Cardinals piled up 417 total yards.

Patrick Morris roamed for 125 yards on 12 carries. Fullback Cayce Draper muscled his way to 91 yards on 15 totes. Tailback Max Baker scooted for 66 yards on six carries while Trahan had 46 yards on 11 carries.

“It was great to get back on the field,” said Cardinal coach Dwayne Dubois. “We challenged the kids the last several weeks after tough losses to West Orange and Newton. We have some senior three-year starter up front that we pushed to step up their play and we did so with the backs as well. They really responded well and dominated across the board tonight.”

The Indians finished with 231 yards.

Monroe Harding led the way with 86 yards on 13 carries while Dylan Reeves had 75 yards on 14 carries.

Bridge City is looking to punch in their second playoff ticket in as many years and Dubois knows there is plenty of work ahead.

“This is just the first game and we have four more left,” said Dubois. “This is a good win but we can’t be satisfied. We want to be in the playoffs but we’re also striving to win that district title. That should be every teams’ goal. We played really well tonight but we can’t rest on our laurels, we’ve got a tough district to try and grind through.”
The Cardinals piled up 269 total yards in the first half while the Indians mustered 133.
The Redbirds wasted no time hitting paydirt on the first series of the game as they navigated 69 yards in nine plays.
Draper carried four times for 37 yards on the series, including runs of 15 and 10. Morris zipped for 17 yards on two totes and Trahan had 15 yards on three carries, including a one-yard touchdown plunge.
Alfredo Heraldez drilled the extra-point to give the Cardinals a 7-0 edge with 7:56 in the first quarter.
Cleveland responded on their first series by putting three point on the board.
The Indians picked up 31 yards in eight plays. Quarterback Jett Hendrix hit receiver Joel Limon on a big 16-yard strike on fourth-and-4 from the BC 32.
However, the Cardinal defense rose up late and the Indians wound up settling for a 31-yard field goal by Erik Fernandez with 3:55 left in the first quarter.
Bridge City quickly retaliated with a typical Big Red drive as they wore out the Indian defense with a 10-play, 62-yard scoring march.
Morris had a big 11-yard run and Trahan had a 10-yard keeper on the series. Max Baker shredded the Cleveland defense for a 24-yard dart that got to the Indian 1 and Trahan capped it with a one-yard plunge with 11:31 in the half.
The Indians got a big run from Dylan Reeves on the next series after he darted 28 yards to the Indian 48, however, he fumbled the ball away to Cardinal linebacker Brady Coulter and Bridge City took over.
The Cardinals quickly caught the Indians off guard when Trahan hit receiver Hunter Denton along the left side for a 31-yard gain to the Indian 17. Draper and Baker teamed up for 13 big yards and two plays later Trahan earned his fourth TD with a three-yard plunge off left tackle to push the lead to 21-3 with 8:30 left in the half.
Cleveland would drive from their own 12 all the way to the Cardinal 17 but came away empty-handed. Monroe Harding scooted for a 29-yard sprint to the Cardinal 44 and Hendrix had a big 16-yard run to the BC 15 but the Cardinal defense stood firm and a bad snap on a 34-yard field goal try gave the Cardinals the ball at their own 25 with 4:24 in the half.
The Cardinals went right back to work as they wore out the Indian defense on a 10-play, 75-yard scoring drive. Morris had three carries for 43 yards and a six-yard catch on the drive.
Baker broke free again, zipping to the Indian 1 with a 17-yard jaunt up the middle. Trahan did the honors again, sneaking in from a yard out behind center Joseph Adams and pushing the lead to 28-3 with 0:24 in the half.
Morris zipped for 76 yards on eight carries in the half. Draper had 11 totes for 66 yards while Baker darted for 47 yards on three carries and Trahan had 43 yards on 10 carries with the four scores.
Harding had 45 yards on five carries for the Indians while Reeves had 42 yards on five carries. Hendrix was 2-for-4 passing for 30 yards while rushing for 25 yards on five carries.
Both teams played superb defense for most of the third quarter as neither squad put points on the board.
The Cardinals came up with a eight-play, 71-yard scoring drive to collect their fifth TD early in the fourth quarter. Draper had 21 yards on two carries on the march and Morris finished it off as he broke loose for a 21-yard touchdown scamper to push the advantage to 35-3 with 10:31 remaining.
Bridge City found the end zone again pretty quickly when they zipped 57 yards in five plays. Morris rumbled through the Tribe defense for a 23-yard gain that got to the Indian 33 and Hunter Denton flashed his speed two plays later when he went of left tackle and cruised 23 yards for a touchdown to push it to 42-3 with six minutes left.
The Cardinals will return to action next week when they visit Orange County rival Little Cypress-Mauriceville at Battlin’ Bear Stadium.

“LC-M will be a tough road trip for us,” said ıickham. “They have some excellent skill people. Coach 9Randy) Crouch does a good job there. Coach (Dwight) Bickham and Coach (Chris) Pachuca are great guys I’ve worked with before. It’s a rivalry game that goes way back and both teams will certainly be prepared and fired up for that one.”