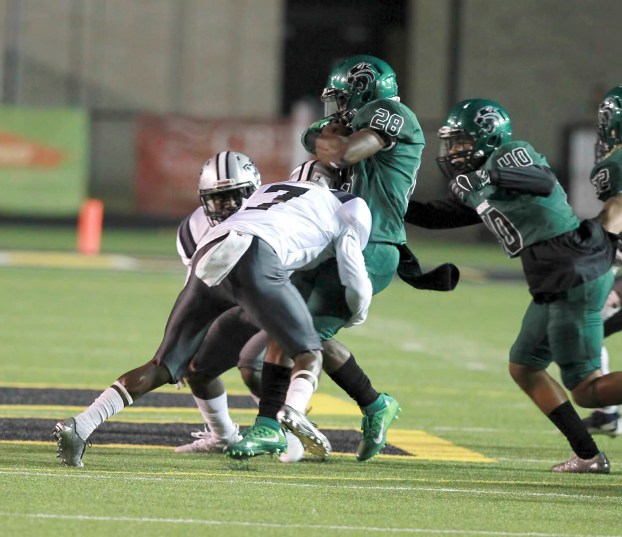 WEST ORANGE — It is time for Phase Two for West Orange-Stark as the Mustangs, ranked No. 1 in the Class 4A state ranks, will look to defend yet another district title when they welcome in the Hamshire-Fannett Longhorns for the start of District 12-4A Division II at Hooks Stadium Friday night.

WO-S is coming off a 45-21 victory over the Kennedale Wildcats to wrap up their non-district play. Meanwhile, the Longhorns got into the win column for the first time with a 61-7 trouncing of Beaumont Kelly.

The Mustangs will check in with the district’s best defense and perhaps the state as WO-S is allowing just 115.3 yards a game.

WO-S did allow 312 yards on the ground to Kennedale last week as the Wildcats scored three times late in the game after the Mustangs had built a 38-0 cushion.

The H-F offense is averaging 337.8 yards a game though.

Running back Tyrece White is second in the district with 686 yards and six touchdowns on 77 carries. Quarterback Matthew Conkle has 238 yards and two TDs on 38 carries on the ground and has completed 29-of-67 passes for 334 yards with a TD and three picks.

The Mustangs are churning out a balanced 378.3 yards a game on offense to rank second in 12-4A behind Liberty.

Quarterback Jack Dallas has spread the ball around, completing 58-of-101 passes for 883 yards with 11 TDs and four picks.

Tailback Jeremiah Shaw ranks third in the district with 579 yards and 12 TDs on 68 totes and also has seven catches for 115 yards and a score. Fellow back Kavyn Cooper has 233 yards and two TDs on 35 carries.

The Mustangs will travel to Sour Lake next week to face the Hardin-Jefferson Hawks.

LITTLE CYPRESS — It could be a good old-fashion shootout Friday night when the Little Cypress-Mauriceville Battlin’ Bears head to... read more