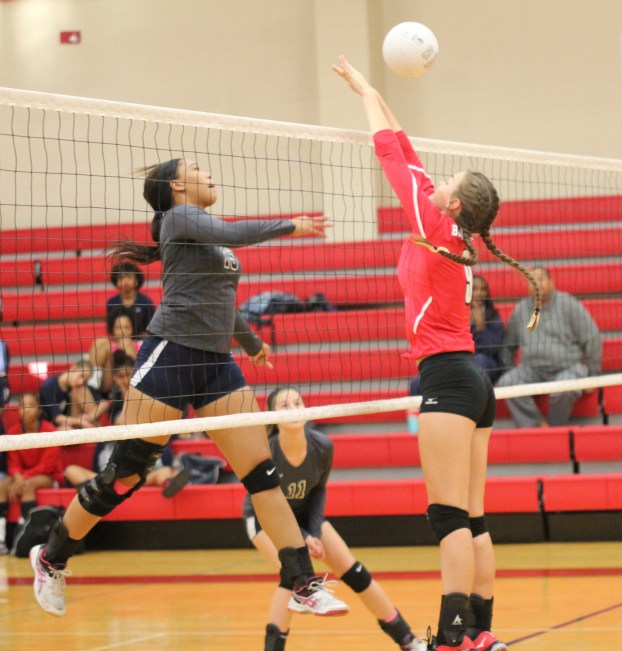 BRIDGE CITY — Getting a big night from hitters Shatyra Allen and Ja’Tajah Vital the West Orange-Stark Lady Mustangs snagged their first district volleyball win of the season by getting past the Bridge City Lady Cardinals 25-23, 25-20, 15-25, 25-17 at Cardinal Gym Tuesday night.

Allen posted a match-high 18 kills while Vital had 15 as the Lady Mustangs improved to 1-3 in district play.

The Lady Cardinals slipped to 0-4 in league play despite notching 44 kills compared to the Lady Mustangs’ 38. However, too many unforced errors proved to be the nemesis for Bridge City throughout the match.

Madison Caraway had a strong outing at the net for Bridge City as she claimed a team-high 15 kills. Reyna Owens chimed in with 14 kills while Hannah Wiegreffe notched eight.

The Lady Cardinals rallied in Game One to tie it up at 22-22 but the Lady Mustangs got a kill apiece from Vital and Allen and scored three of the last four points.

WO-S erased a 7-6 deficit in Game Two by scoring seven straight to go up 13-7 and then held on for the win.

Game Three saw Bridge City go on a 10-4 run in the middle of the game as the Lady Cardinals pulled away to win that one.

WO-S controlled Game Four. The Lady Mustangs led 8-7 but utilized a 8-1 run to go up 16-8 and they never looked back to take the victory.

The Lady Mustangs will welcome Orangefield Friday while the Lady Cardinals travel to Hamshire-Fannett.