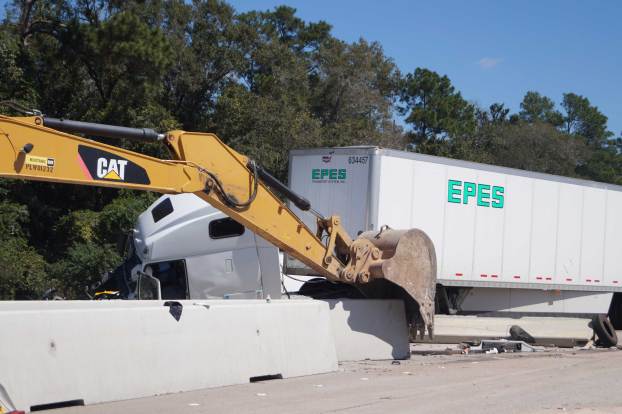 UPDATE: All westbound of Interstate 10 near FM 1442 have reopened following an earlier crash.

UPDATE —At approximately 11:00a.m., the Texas Department of Public Safety received a report of a two vehicle crash on Interstate 10 near FM 1442 in Orange County.

A 2013 Ford pickup truck towing a trailer loaded with an additional vehicle was traveling westbound on the Interstate.  The driver of the Ford was unfamiliar with the roadway markings and drifted into the outside traffic lane.  Once the driver realized that she had drifted into the other lane, she slammed on the brakes causing the trailer to swerve.  As the trailer swerved into the outside lane, it was struck by a 2008 Volvo truck tractor semi-trailer.  After the impact, the Ford and the trailer rolled over several times before coming to rest.

The driver of the 18-wheeler, 48-year-old Michael Lockett of Houston, was transported by ambulance to St. Elizabeth hospital with minor injuries.  The driver of the Ford, 33-year-old Lauren Slavien of Louisiana, and her two passengers were not injured in the crash.

Slavien was issued a traffic citation for failure to drive in a single lane.

At this time, all westbound lanes of Interstate 10 near FM 1442 remained closed.  The roadway will remain closed until crews safely remove crash debris and motor vehicle fluids from the road.  Motorists are urged to find alternate routes.  Expect delays.

At approximately 11:00a.m., the Texas Department of Public Safety received a report of a two vehicle crash on Interstate 10 in Orange County.  The crash is near FM 1442 and involves a truck tractor semi-trailer.

Initial reports indicate that a crash occurred in the westbound lanes of the Interstate between a passenger vehicle and a truck tractor semi-trailer.  Injuries have been reported; however, the extent of those injuries are unknown and this time.

Due to the extent of the crash, all westbound lanes of the Interstate near FM 1442 are closed. Motorists are urged to find alternate routes.  Expect delays.