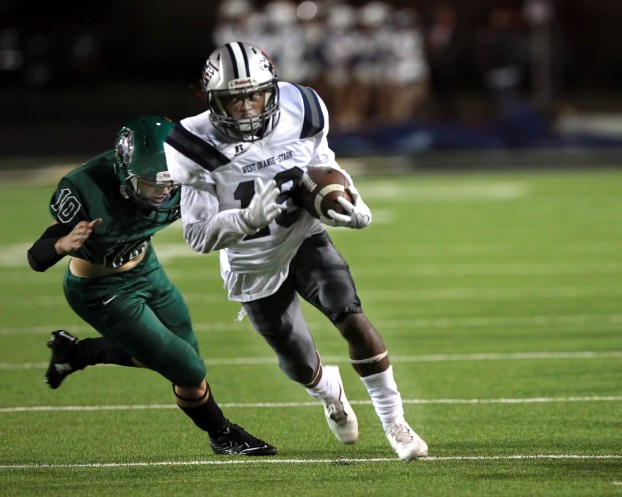 NACOGDOCHES — Jack Dallas led a strong offensive attack to lead the West Orange-Stark Mustangs to a 45-21 win over the Kennedale Wildcats.

The WO-S Chain Gang Defense brought their usual stout defense as they held the Wildcats (2-3) to just 89 yards of offense through three quarters of play and only allowing five total first downs on the night. Despite the Wildcats being the first team to score an offensive point on the Mustangs (6-0), the WO-S have outscored their opponents a whopping 299-23 in 2016.

The Mustangs took a good bit of the first quarter to find their groove offensively and were held scoreless in the opening quarter. After forcing the Wildcats to two straight three-and-outs the Mustangs drove 76 yards on 15 plays to tally the first score of the night. Jack Dallas faked a hand-off to the right, catching the defense leaning as he skipped around the left side for a 10-yard touchdown run. Following a botched extra-point the Mustangs led 6-0 with just over 11 minutes remaining in the second quarter.

Kennedale, plagued by penalties in the first half, would struggle to find any answers against the Mighty Mustang defense. The Wildcats seemed to have found some life after picking up two first downs on their next possession, but again would be forced to punt after penalties and a big Mustang sack by Morris Joseph.

Following a 2-for-7 start for Jack Dallas he would find his rhythm in the second quarter. Ronald Carter ,who prior to this game has not caught a pass at wide receiver, grabbed three passes for 67 yards on the next Mustangs’ set of downs. He catapulted the Mustangs further out front after grabbing a fade route pass for a 40-yard touchdown. The Mustangs led 14-0 following a KJ Miller two-two-point conversion with 3:57 left in second quarter.

The offensive woes continued for Kennedale. After their biggest play from scrimmage on a 24-yard run by Stafford the Wildcats would fumble the snap and Jalon Powdrill hopped on the loose ball to give the Mustangs the ball back with excellent field position.

The Mustang offense quickly went to work. Jeremiah Shaw capped off a five- play 44-yard drive with an eight-yard touchdown run off the left side to push the lead to 21-0 with 1:57 remaining. Shaw finished the night with 115 total yards and three touchdowns.

With three timeouts remaining and just under two minutes on the clock in the first half the Mustangs use all three timeouts to give their offense another shot. The clock read 1:11 as Jack Dallas managed to work his offense down to the red-zone. Chad Dallas would get the call with :03 on the clock and he knocked in a 30-yard field goal to give the Mustangs a 24-0 lead at the half. The Mustangs rolled up 264 yards of offense in the first half while holding the Wildcats to just 74 yards.

The Wildcats received the second half kickoff. However, they were unable to swing any momentum their way as they again fumble the snap with Cory Skinner scooping up the ball for WO-S. The Mustangs regained possession at midfield and again made quick work in just five plays with another Shaw touchdown as he would bounce outside for a 19-yard score giving Mustangs total control, 31-0.

Another lackluster attempt by Kennedale would ensue the Mustang score as the Wildcats turned the ball over on downs. The speedy KJ Miller helped make another quick possession for the Mustangs. Miller grabbed a screen pass from Dallas and took it 45 yards down inside the Wildcat 5. Shaw finished off the drive, slipping through the middle for a four-yard touchdown run. The Mustangs led 38-0 with under five to play in the third quarter. Miller finished a stellar night with 114 total yards from scrimmage.

The Wildcats finally found some daylight with their wing-T running attack. Knowles split past the massive Mustang defensive lineman to break free for a 52- yard run which he’d cap off the drive with an eight yard touchdown run for the first touchdown scored on the Mustangs dating back to the State Championship game (25 quarters). The Cats’ narrowed the score to 38-7 entering the fourth quarter.

Miller and Shaw combined for 48 yards on the next Stangs’ possession to set up a Jack Dallas nine-yard touchdown pass to BB Tezeno to essentially seal the deal, 45-7 with 8:57 remaining in the game.

Kennedale however would not wave the white flag yet. They still had two scores left in them as they were able to expose a hole in the Mustang defense with Knowles rumbling for 90 yard touchdown and quarterback Jowers throwing a 45 yard touchdown pass to Stafford. The Wildcats trailed, 45-21 with under five minutes left in the game, but failed to get any closer as time expired. Knowles rushed for 197 yards on 15 carries with two touchdowns.

The Mustangs will their district schedule starting next Friday playing host to the Hamshire-Fannet Longhorns (1-5). Last season the Mustangs gave up just three points in district play and with this seasons squad looking more stout, they just may not give up another point in the regular season in 2016.

HOUSTON — Running into one of the most powerful offensive juggernauts in the state Friday night, the Little Cypress-Mauriceville Battlin’... read more