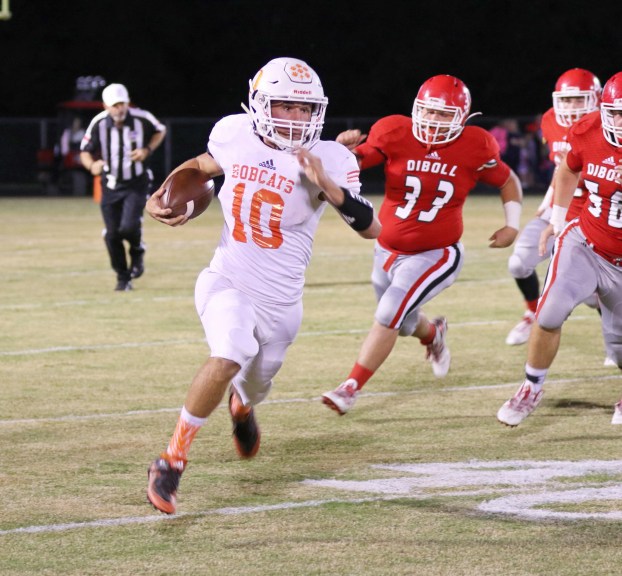 DIBOLL — The Orangefield Bobcats captured a tough 31-21 road game win on in Diboll Friday night with the help of a strong running game.

Orangefield (3-3) totaled over 300 rushing yards in the game and Christopher McGee led the team with 171 yards and three touchdowns on 17 totes.

Running back Wesley Frillou had 81 yards on the ground for the Bobcats while quarterback Caleb Kress, who sat out last week’s 52-0 win against Beaumont Kelly after a concussion at LC-M, had 50 yards.

The Lumberjacks finished with 325 total yards.

The offensive front for the Bobcats wore down the Lumberjacks (1-5) over the game, and after a 14-play drive early in the second half it did all but finish the game.

Orangefield’s first scoring drive consisted of Christopher McGee running one time for 54 yards for a Bobcats’ touchdown. Jacob Rainey made the extra-point boot to make the score 7-0 Bobcats in the first quarter.

The Diboll Lumberjacks quickly responded with a touchdown drive. Desmond Shelby ran for 48 yards to end the drive with a touchdown. The PAT was blocked by the Bobcats and made the score 7-6 Orangefield in the middle of the first quarter.

Orangefield struck again on the next drive starting on their own 36 yard line. Orangefield completed their first pass attempt with Caleb Kress hitting Blake Bradely for 11 yards and a first down to begin the drive. The Bobcats ended it with a 30 yard-field goal from Jacob Rainey, making the score 10-6 Orangefield.

After the Lumberjacks force a safety on the Bobcats it made the score 10-8 in the middle of the second quarter. Diboll took over on its own 43 on their very next drive. On the back of Shelby the Lumberjacks took it into the endz one and make the PAT to make the score 15-10 Diboll to end the first half.

Orangefield took over on its own 20 yard line and after a long 14-play drive, Mason Gonzalez ran it in from one yard out for the touchdown. After a two point conversion run by Frillou the score pushed the Bobcats up 18-15.

Orangefield got the ball back after a defensive stop and took over at its own 39. McGee and Blake Bradley ran for 30 yards combined and McGee capped it with a 12-yard touchdown romp. The PAT from Rainey was good making it 25-15 Orangefield.

Diboll stuck back with a scoring drive starting from their own 31 yard line. Quarterback Nathan Garcia took to the air, throwing six times including the touchdown pass for 28 yards to Jemarcus White. The Two point conversion was no good to make the score 25-21 OF.

The Bobcats will visit undefeated Liberty next week to crank up District 12-4A Division II action.