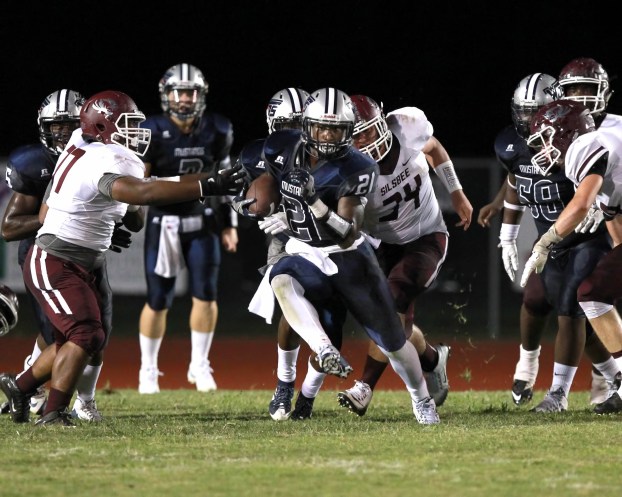 WEST ORANGE – After a sluggish first half on offense, the West Orange-Stark Mustangs relied on a stout defensive effort.

In the second half, the Mustang offense clicked on all cylinders and the defense did as well.

Holding Silsbee to just 90 yards of total offense and two first downs, the Class 4A ranked No. 1 Mustangs buried the Tigers 51-2 in non-district action at Hooks Stadium Friday night.

The Mustangs (5-0) did give up their first points of the year, a safety in the second quarter, as the defense has yet to be scored on this season.

Silsbee had the ball in the red zone five times in the first half and walked away empty-handed.

“Shutouts are great and all, but it’s all about getting that win,” said Mustang coach Cornel Thompson. “We came out and sputtered offensively and our old defense held firm. We’re a ‘salty’ bunch on defense and those guys don’t like to give an inch. Offensively, we got it going in the second half. This by far was not our most complete game of the year but it was a big win for us as we move along.”

The Tigers (1-3) came in with some offensive weapons but the Mustangs held them at bay.

WO-S put together a season-high 433 yards of totals offense.

Quarterback Jack Dallas completed 12-of-21 passes for 212 yards and three touchdowns, recovering nicely after being picked off three times in the first half.

Mustang running back Jeremiah Shaw finished with 144yards on 18 totes and a TD.

Silsbee running back Calvin Tyler finished with 113 yards on 20 carries and picked up Silsbee’s two first downs on the night with runs of 62 and 38 yards. He only had 13 yards on his other 18 totes.

Meanwhile Silsbee quarterback Willie Jones was just 1-for-11 for seven yards and had minus 44 yards rushing on nine carries as the Mustangs were all over him.

“Silsbee came in here with a lot of talent,” said Thompson. “To hold those tremendous athletes without a touchdown is a great feat. That Tyler kid is a good one and we broke down on his two long runs. Other than that, it was a tremendous effort defensively across the board. Silsbee will make some noise in their district, count on it.”

Despite committing four turnovers, the Mustangs went into the half with a 14-2 edge.

The WO-S defense held the Tigers out of the end zone in the first 24 minutes despite  Silsbee being in the red zone four times. The Tigers only had two first downs in the half, both on long runs by Tyler.

The Mustangs wasted no time getting on the board on the first series of the night.

WO-S navigated 88 yards in nine plays. The Mustangs chewed up 56 yards of it via the ground game as Shaw ran for 22 yards on three carries

and Dallas twice for 18.

Dallas connected with receiver Keion Hancock on a 27-yard dart along the left side that got all the way to the Tiger 10. Hancock did the scoring honors two plays later when he swept around the right side for a six-yard touchdown.

Chad Dallas booted the extra-point as the Mustangs led 7-0 with 8:32 in the first quarter.

After holding the Tigers to a quick three-and-out, the Mustangs took over at the Silsbee 35 after the Tigers had a facemask penalty on the punt return.

Shaw cut loose for a 23-yard scoot around the right side to the 12.

Three plays later Dallas had a great scramble to the right and threw a dart to receiver KJ Miller, who sprinted wide-open along the right side of the end zone for a 10-yard touchdown to push it to 14-0 with 4:21 in the first.

The Tigers threatened late in the quarter.

On fourth-and-2 from their own 32, the Tigers elected to go for it and it paid off as Tyler, who had 118 yards on 12 carries in the half, zipped off right tackle and went 62 yards all the way down to the Mustang 5.

However, the Chain Gang Defense rose up. They stuck Jones for a five-yard loss back to the 9 on third down. The Tigers decided to go for the touchdown but it backfired when Jones had his pass intercepted by Jarron Morris in the back right side of the end zone with 0:07 in the first.

On the last play of the first quarter, Dallas got a pass intercepted by Aaron Sells at the WO-S 34 and he returned it to the 21.

The WO-S defense rose up again, stopping the Tigers on fourth-and-6 from the 16 when backup quarterback Jacob Collins’ pass went incomplete.

Mustang Chaka Watson coughed up the ball at the Mustang 7. Once again, the Mustang defense rose up. On fourth-and-goal from the 6, Mustang

defensive back Demorris Thibodeaux stuck receiver Kalon Barnes on a reverse at the 1.

Finally, an opponent got on the board against the Mustangs for the first time this season.

Hancock broke loose for what looked to be a 99-yard touchdown run around the left end as he outran the entire Silsbee secondary.

However, the Mustangs were called for holding when Hancock had the ball in the Mustang end zone on the play and the Tigers were credited with a safety to make it 14-2 with 7:29 in the half.

After holding the Tigers to another three-and-out, the Mustangs took over at their own 17. However, Dallas was picked off by Tiger cornerback Cameron White at the Mustang 41 and he returned it to the 11.

Once again WO-S’ defense held firm, holding the Tigers out of the end zone again as a Jones’ pass went incomplete in the back of the right side of the end zone.

The Mustangs outgained the Tigers 177-114 in the half. Dallas was 6-of-12 for 74 yards and three interceptions. Shaw had 69 yards on six carries. Miller had two catches for 42 yards.

Jones was 0-for-8 passing with an interception.

The Mustangs got payback with a safety of their own early in the third quarter when Jones faced a heavy rush from the Tiger 20, He drifted all the way back to the end zone feeling the heat and was called for intentional grounding, thus giving WO-S a safety and a 16-2 lead with 10:39 in the third.

WO-S went from its own 35 all the way down to the SIlsbee 8 midway through the third. The Tiger defense held firm and SIlsbee wound up blocking a 25-yard field goal attempt by Chad Dallas with 6:30 in the third.

After Silsbee got off just a nine-yard punt to allow WO-S to get the ball at the Tiger 32, it took the Mustangs six plays to find the end zone, helped by the hands of Hancock.

Dallas found Hancock on a short route to the left and Hancock got to the sideline, leaping a Tiger in the ptocess and reaching the Tiger 7.

Three plays later Hancock was a recipient of a six-yard touchdown pass from Dallas as the Mustangs went up 23-2 with 1:40 in the third.

The Mustangs stuffed Silsbee on a fourth-and-4 play from the Tiger 31 with 11:15 remaining and then got on the scoreboard again when Jack Dallas kept it on fourth-and-7 from the 18 and scooted off left tackle and went untouched into the end zone for a 30-2 lead with 9:56 left.

After holding the Tigers deep, WO-S took over at the Silsbee 37 with 8:01 left. Three plays later Dallas found Miller breaking over the top of the right side and Miller hauled in a 36-yard scoring strike to make it 37-2 with 7:14 left.

Taking over at the Silsbee 43 with 4:51 left, it took the Mustangs just three plays to score. Dallas connected with Caleb Ramsey for a 25-yard gain and Shaw capped it with a seven-yard touchdown romp.

The Mustangs drove 51 yards for their final score as Dallas hit receiver BB Tezeno for all 51 of it, one a 24-yard pass to the Tiger 27 and the other when Tezeno made a great grab with defenders all around him for a 27-yard touchdown in the left back corner of the end zone.

The Mustangs will wrap up their non-district slate when they travel to Nacogdoches High School to meet Kennedale halfway.

Kennedale was a 4A Division I state semifinalist last season.

“Kennedale will be a big test for us,” said Thompson. “A state semifinalist a year ago and they’ve been ranked this year. It’s going to be a nice challenge before district cranks up here in a couple weeks.”