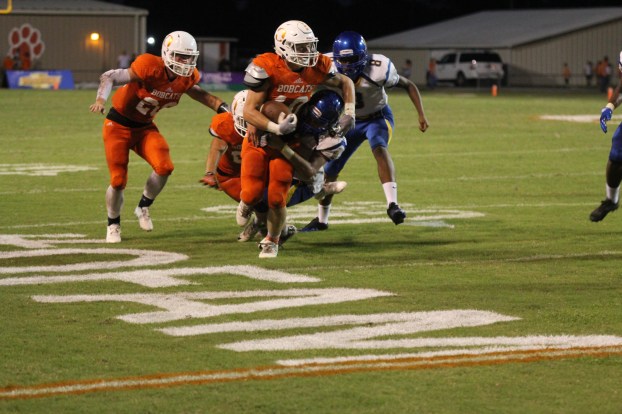 ORANGEFIELD — The Orangefield Bobcats put on a show for the homecoming crowd Friday night, shutting out the Kelly Bulldogs 52-0.

Wesley Frillou dazzled the hometown crowd with 120 yards and a second quarter 71 yard touchdown run. The Bobcat defense stifled the Bulldog offense, holding them to a paltry 27 total yards on the night.

“We did what we needed to tonight to get the win, but there are some things we still need to clean up before district play starts,” Bobcat head coach Josh Smalley said “By district play against Liberty we should be rolling and firing on all cylinders.”

It took the Bobcats a couple of possessions to get in the groove with Mason Gonzales filling in under center for Caleb Kress, who is out after suffering a concussion against LC-M last week.

Following a Blake Bradley fumble in Bulldog territory the Bobcat defense forced the second Bulldog punt of the night giving the Cats’ excellent field position at the midfield.

The Bobcats quickly worked their way into the red-zone setting a first and goal from the 11 yard line. Gonzales kept three keepers to eventually lunge in for a two-yard touchdown. Bobcats led, 7-0, with just over three minutes left in the first quarter.

The Bobcat defense held their own again forcing yet another three-and-out as the Bulldogs mustard just one first down through one quarter of play. It took the Bobcats just a few plays before Christian Louvier took off down the right side for a 43-yard touchdown run for a 14-0 advantage after one quarter of play. Louvier garnered 73 yards on the night with 1 touchdown.

Andrew Hoyland applied the pressure for the Bobcat defense on the Bulldogs next series. Hoyland ran down Bulldog quarterback, Logan Henke, for a sack and a loss of 20 yards that forced another punt. Hoyland had one sack, two tackles for a loss and an interception on the night.

The Bobcats took the ball 78 yards down to the Bulldog five yard line on eight plays on their next possession, but would sputter and forced to kick a field goal. Unfortunately, the Jacob Rainey chip-shot field goal was wide right which gave the Bulldogs the ball deep in their own territory.

Orangefields defense remained stout again shutting down Kelly to get the ball back with under five minutes left in the second quarter. Wesley Frillou took the first hand-off down the left side for a 71 yard touchdown. The Cats’ remained out front, 20-0, with 4:15 left in the half.

The Bobcats looked like a finely tuned machine once they got rolling. Junior defensive back, Dylan Williams, read the Kelly offense perfectly and grabbed an interception that he took 28 yards for a touchdown. Hunter Evans followed with a four yard touchdown run right before the half for a 32-0 Bobcat lead.

It took just half a minute for the Bobcats to find the end-zone in the second half. Gonzales took the second play from scrimmage up the middle to gallop for a 57 yard touchdown. The extra point afterward would be another miss for the usually mistake free Rainey. Rainey missed three extra points on the night.

The Kelly offense continued to struggle with Hoyland grabbing the second Bobcat interception on the night which made way for Williams to find the end-zone, but this time he’d score on a four yard carry up he middle. Williams put an exclamation point on his coming out party with another touchdown run in the fourth quarter to seal the game, 52-0. He notched three total scores on the night with 31 yards rushing,one interception and a sack. Williams is a third generation Bobcat with both his dad, Chris (1998) and grandfather Rusty Williams (1974), playing football for the Bobcats.

Orangefield (2-3) racked up 365 yards of offense in route to their big win and will take their momentum on the road next Friday to face Diboll before starting district play at Liberty on October 7. Kelly (0-5) will return home after suffering their third shutout of the season to face the Longhorns of Hamshire-Fannett.

See you at the Station

Residents of City of Pinehurst, above, Bridge City, below, along with supporters of Orange County Sheriff’s Office, not pictured, met... read more