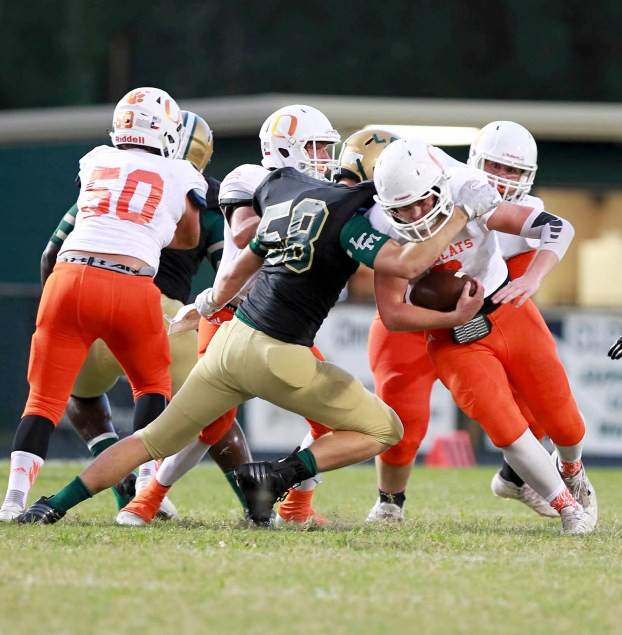 ORANGEFIELD — After dropping one of the most dramatic and exciting games an Orange County matchup has had to offer in a long time, the Orangefield Bobcats will look to regroup this week when they play host to the Beaumont Kelly Bulldogs.

The Bobcats (1-3) will look to end a three-game skid while the Bulldogs (0-4) will look to find some offense after a very sluggish start.

After a tough 41-7 loss to Woodville, the Bobcats pushed Little Cypress-Mauriceville to the limit, falling to the Bears 43-42 in overtime.

The Bobcats kept plugging away at the Bears after being behind most of the night and even took the lead after scoring first in overtime only to see the Bears score and convert a two-point conversion to win it.

“We would get behind and our kids just kept battling and darn near won the thing,” said Bobcat coach Josh Smalley. “That’s the Bobcat team we’ve been looking for the last couple weeks. We competed to the end and I think they will be ready to bounce back.”

Despite injuries to quarterback Caleb Kress and leading rusher Christopher McGee, who both played well against LC-M, and back Wesley Frillou sat out the LC-M game entirely, the Bobcats still churned out nearly 300 yards on the ground against the Bears.

Orangefield will check in against the Bulldogs averaging 237.5 yards a game, 227 via the ground game.

McGee leads the ground attack with 262 yards and two touchdowns on 38 carries.

The Bobcats will look to tighten things up on the defensive side of the ledger. They gave up 415 yards to the Bears, 245 in the air.

Orangefield is allowing 292.8 yards a game.

The visitors from Beaumont have definitely struggled moving the ball as the Bulldogs have scored just a total of 21 points in their four contests.

Seven starters returned to operate the Kelly Pro I offense. Logan Henke and Connor Henry could both see time at quarterback. Running backs Jomard Valsin and Earl Robertson will be getting the carries in the offense with fullback Jordan Patterson doing the blocking.   Drew Rawls will line up outside to try to haul in passes.

This will mark the 19th meeting between the two schools.

The Bobcats will hit the road next week for their final non-district game when they visit Diboll. The Bobcats will open their District 12-4A Division II campaign on the road Oct. 7 at Liberty.