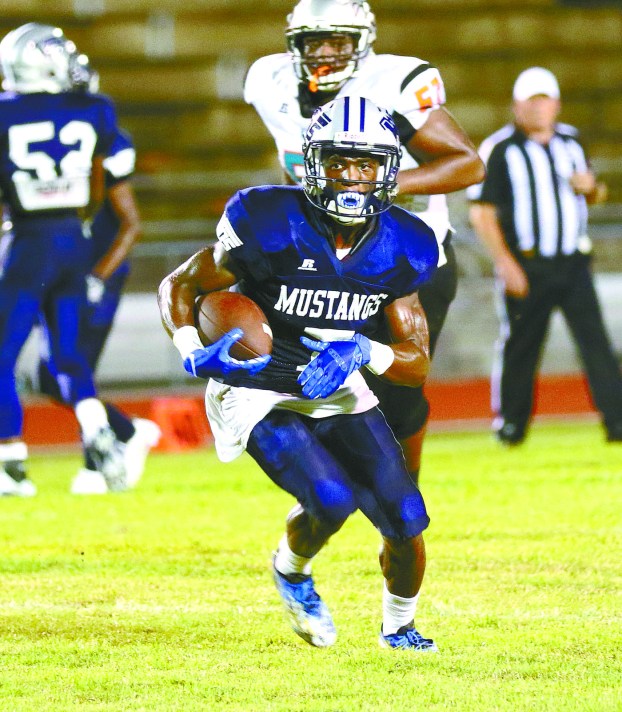 Leader Photo by Joey Dupuy WO-S’ Malick Phillips heads up the field for a big gain.

The Mustangs have not given up a point on the season and have outscored their opponents 203-0. The Mustangs (4-0) rolled up 357 yards of offense en route to the win while holding Kipp to a paltry 34 yards.

The Mustangs went right to work and picked up where they left off against Bridge City last week.

Two minutes into the first quarter the Mustangs led 13-0 and never looked back. The Gators opened the game with an onside kick to avoid a big return by the always dangerous Mustang returnman KJ Miller.

It took the Mustangs just four plays to go 64 yards for the first score of the night. Blake Robinson caught a six-yard pass from Jack Dallas for the score.

The Mustang defense held the Gators to a three-and-out on their first possession to make way for the punt return team. Dominique Tezeno took the punt 55 yards for the Mustangs’ second score.

The Chain Gang defense kept the pressure on Kipp quarterback with Jalen Powdrill notching two sacks on the next Gator possession to force a turnover on downs. The Mustangs took over at the Gator 45 yard and again made easy work of the Gator defense. Dallas bobbled the shotgun snap at the two-yard line, but pulled it in and dove in for a short touchdown and a 20-0 lead with near four minutes remaining in the first quarter. Kavyn Cooper scored from 11 yards out after the Mustangs recovered a Gator loose ball as the Mustangs led big, 27-0, at the end of the first quarter.

Jarron Morris intercepted Gator quarterback Desomond Houston on the next series to give the Mustangs excellent field position inside the Gator 20. Two plays later Jeremiah Shaw was able to find room off the right side for a 12-yard touchdown run, giving the Stangs’ a 34-0 advantage.

The Mustangs were minutes into the second quarter and were already rolling with the second team offense. Chaka Watson took over the quarterback position and settled in quickly. Watson hit Malick Phillips on a 42-yard pass for a touchdown on his first possession under center. The score put the Mustangs up big, 41-0, with just over five minutes remaining in the second quarter.

Kipp fumbled the ensuing kickoff following the Mustang touchdown to give the ball right back to the home team. The Mustangs took over just outside the red zone. Justin Sibley carried the ball three times for 19 yards before Watson hit Tezeno for a five-yard touchdown pass and a 48-0 lead at the half. The Mustang defense had three takeaways and five sacks in the first half. Watson finished the night with 63 yards passing, two touchdowns and one interception.

The Gators were unable to find an answer for the defending state champs even as the third team took over for the Mustangs. The Stangs’ quickly forced another turnover on downs to open the second half. Watson quickly worked the offense down the field for a quick scoring drive that he capped off himself for a 21-yard touchdown run.

The Mustangs wrapped up the scoring with a 33-yard touchdown run by Tezeno to end the night, 61-0. Tezeno notched three scores in the blowout while the Mustangs drained the clock in the fourth quarter to prevent running up the score.

The unbeaten Mustangs will host a chippy Silsbee Tigers (1-2) team next Friday. The Tigers had a bye this week which provides ample time to game plan for the Mustangs. Kipp Northeast (0-3) is still searching for their first win and return home to play Kipp Generations Collegiate.