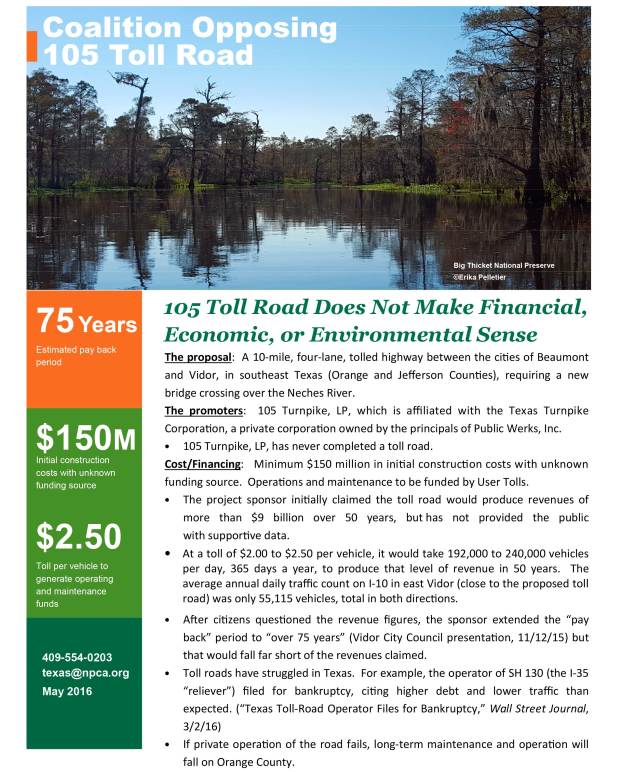 Approximately 30 people met in Beaumont Wednesday, representing a variety of organizations and interests, all united in their opposition to the proposed 105 Toll Road, which would connect Interstate 10 in Vidor with State Highway 105. The 10-mile private toll road, promoted by 105 Turnpike, LP, would slice through the Big Thicket National Preserve and harm neighborhoods and businesses along other parts of the route. The turnpike company is affiliated with Texas Turnpike Corporation of Dallas, which is owned by the principals of Public Werks, Inc.

“The reason for this meeting is to update the broader coalition on our efforts to prevent the toll road proposal, to invite others to participate, and to plan our next steps,” stated Suzanne Dixon, Senior Regional Director for National Parks Conservation Association. “The concerns about this proposal are not just environmental, there are substantial financial concerns. Anyone who has followed the failure of similar toll roads in Texas, like SH 130 east of Austin, should object to repeating such a risky business venture in southeast Texas.”

The Coalition Opposing the 105 Toll Road has identified numerous problems with the toll road proposal. “First and foremost is the totally unacceptable damage it would do to the Big Thicket National Preserve,” said Janice Bezanson, Executive Director of Texas Conservation Alliance. The Big Thicket National Preserve, a national park and international biosphere reserve, attracts over 125,000 visitors to the area each year, who spend $7.9 million annually.

“But the impacts don’t stop there,” Bezanson continued. “Neighborhoods, businesses, Collier’s Ferry Park, the Neches River, miles of wetlands – all would suffer.”

Numbers compiled by the 105 Toll Road indicate the promoters’ revenue claims are way out of line. Representatives of the turnpike company project $9 billion in toll fees over a 75-year period. At the projected toll of $2.00 to $2.50 per trip, it would take 130,000 to 165,000 cars per day every day for 75 years to achieve the projected revenues. For comparison, daily traffic counts in 2014, on Interstate 10 near where the toll road would start, were only 55,000 cars per day.

“We are very pleased with the turnout of the meeting,” concluded Dixon, “which shows the substantial force behind the opposition to this project.” “We will be ready when the turnpike company finally releases its traffic, economic, and environmental assessments to the public. What the promoters have released so far falls far short of describing the huge negative environmental, economic, and social impacts the 105 Toll Road would have.”

Special to The Leader National Night Out, a nationwide program to foster better relationships between local police departments and communities,... read more