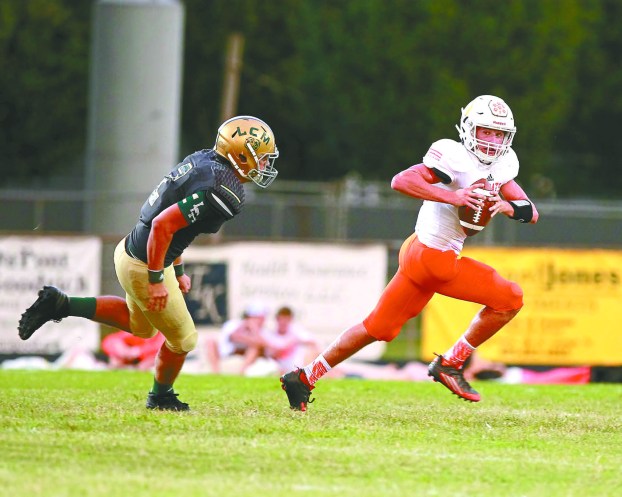 LITTLE CYPRESS — In a game that will likely be remembered as one of the best to ever be played in Orange County history, the Little Cypress-Mauriceville Battlin’ Bears squeezed out a dramatic 43-42 overtime victory over the Orangefield Bobcats Friday night for Homecoming in non-district action.

Leading the Bobcats for most of the game, the Bears (2-2) had to will their way to victory in the extra session.

Trailing 42-35, the Bears faced a fourth-and-6 from the 21 on their overtime series
but quarterback Beau Bickham completed an 11-yard pass to running back Chris Winters to the 10 and Winters capped it with a 10-yard sprint around the left side to pull the Bears to within one.

LC-M coach Randy Crouch decided to go for the win and went for the two-point conversion. The gamble was worth it as Winters darted over the right side to give the Bears the victory.

“What a great football game,” said Crouch. “We felt like we had to go for two there at the end because both teams were really struggling trying to stop one another. We really struggled trying to stop Orangefield there in the second half and they controlled the ball, kept it from us and did a great job. I liked what we did in the first half. We felt like we could punch it in for two with one of our good athletes and Chris (Winters) got it in there for us.”

Orangefield coach Josh Smalley was certainly proud of his troops.

“We would get behind and our kids just kept on battling and battling and darn near won this thing,” said Smalley. “That’s the Bobcat team we’ve been looking for the last couple of weeks. We came out and competed to the end. It’s a tough way to lose a game, because we fought back so hard. I’m proud of them and we know they’re going to keep battling for us. They know they played hard tonight and I think they’ll definitely be ready to bounce back next week.”

The Bobcats (1-3) scored a touchdown in four plays to start overtime as back Kelly Tiller ran nine yards to the 16. The Bears then got a defensive holding call after a
two-yard run by Blake Bradley and the Bobcats got the ball at the 5 and Christian Louvier bolted in hard off left tackle from five yards out and Jacob Rainey made the extra-point to make it 42-35 Bobcats.

Bickham posted perhaps his best numbers ever as the Bear signal-caller, completing 14-of-27 passes for 245 yards and three touchdowns, all of them going to receiver Katon Brown.

Brown, a basketball standout, just came out for football before the Hardin-Jefferson game last week. Brown shredded the Bobcat secondary for seven catches for 161 yards.

Winters finished with 96 yards on 13 carries and had a couple big catches.

“Offensively, we did some good things, especially in the first half,” said Crouch. “Katon (Brown) has been such a great addition for us. Proud of Beau (Bickham) too, he came up with some big pass plays for us in long-yardage situations when we needed it.”

Bobcat quarterback Caleb Kress rushed for 95 yards on 14 carries but left the game late in the second half and was feeling woozy according to Smalley. Louvier found his way to 75 yards on 16 carries and scored three TDs. Orangefield’s leading rusher for the season Christopher McGee played hard on both sides of the ball despite battling injuries and finished with 64 yards on 12 totes.

The Bears finished with 415 total yards while the Bobcats had 294, all on the ground.

Bickham completed 8-of-13 passes for 172 yards in the first half and Brown hauled in four receptions for 130 yards to help the Bears to a 21-7 lead at intermission.
The Bears outgained the Bobcats 209-95 in the first 24 minutes.
The first quarter was a defensive slugfest until 1:18 left in the period when Bickham hit lanky receiver Brown over the middle of the field for a 26-yard strike to the 50. Brown did the rest, breaking a couple of Bobcat tackles and turning it up down the right sideline for a 74-yard touchdown jaunt.
Bear kicker John Gonzalez booted the extra-point, giving the Bears the 7-0 edge.
The Bears limited the Bobcats to just 10 total yards in the first quarter. LC-M had 87 yards, 78 via Bickham’s arm.
The Bears put together a superb 13-play, 66-yard scoring drive that ate up 6:23 of the clock in the second quarter.
Winter had a big 11-yard run to the Bobcat 26. Bickham promptly connected with Brown on a 15-yard dart over the middle to the 11.
It looked as if the Bobcat defense was going to hold after stopping the Bears on a couple rushing losses. However, facing a fourth-and-14 from the 15, Bickham rolled out and found Brown again in the left corner of the end zone. Bickham hauled it in with a “Odell-Beckham-styled catch” with one hand for the 15-yard touchdown to put the Bears up 14-0 with 4:40 left in the half. Beckham, of course, is the great receiver from the NFL’s New York Giants.
The Bobcats scrapped right back on the nexgt series, marching 74 yards in seven plays, all in their vaunted Slot-T formation behind a big effort by Kress.
Kress caried twice for 44 yards, including a huge 36-yard around the left end that got to the Bear14. Two plays later back Christian Louvier bolted off left tackle and sprinted into the end zone from 10 yards out. Kicker Jacob Rainey made the PAT as the Bobcats trailed 14-7 with 1:33 in the half.
Unfortunately for the Bobcats, the “Bickham to Brown Show” continued in the second quarter’s waning seconds as the Bears struck again on a seven-play, 60-yard scoring drive.
Bickham had passes to Trey Guillory for 14 yards and to Winters for 16 more as the Bears navigated to the Bobcat 26.
Once again, the Bobcats defense forced the Bears into a tough situation as LC-M would face third-and-10 from the 26. But Bickham, rolling to the left, spotted Brown in front of a Bobcat defender at the 6. Brown hauled it in and turned into the end zone for a 26-yard scoring strike as the Bears scored with 0:12 left in the half.
Kress had 32 yards on five carries in the first half while Louvier had 29 yards on seven carries and McGee had five carries for 22 yards.
Orangefield defensive back Zach Norman picked off a deep Bickham at the Bobcat 35 on the first play from scrimmage in the third quarter.
The Bobcats executed a superb 10-play, 66-yard scoring drive, all via the run game.
Louvier had three carries for 21 yards on the series and McGee had 19 yards on three totes. Kress had a huge 17-yard run and an 11-yarder and then capped it with a one-yard touchdown dart around the left end to trim the Bear lead to 21-14 with 7:10 in the third.
The Bears responded nicely as they took the leather on the next series and went 50 yards in 11 plays to go up 28-14.
The big plays on the march was a 22-yard pass to Guillory over the middle that got to the Bobcat 37 on a third-and-18 play. The other was a nine-yard strike from Bickham to Adam Pope that got to the Bobcat 5 on third-and-8. Three plays later Bickham took it in from the 1 to make it 28-14 with 1:53 in the third.
The feisty Bobcats bolted right back when McGee took the ensuing kickoff 54 yards all the way back to the Bear 30. LC-M got a personal foul called on them as well as the Bobcats set up shop at the LC-M 15.
Kress carried three straight times for all 15 yards, including an 11-yarder and a one-yard keeper for the touchdown to make it 28-21 with 0:17 left in the third.
After pinning the Bears deep on a quick three-and-out, the Bobcats took over at the Bear 42 with 11:44 left.
Kress had a big 19-yard run and back Kelly Tiller had a 10-yard jaunt to the 5 and Blake Bradley capped the five-play march with a five-yard touchdown off the right side. However, a bobbled snap on the extra-point attempt kept the Bobcats from tying it as they still trailed 28-27 with 9:13 left.
The Bears retaliated with a quick response when Winters took the first play of the next series through the heart of the Bobcat defense for a 55-yard touchdown gallop, making it 35-27 with nine minutes left.
The Bobcats scratched right back, going 69 yards on 14 grueling rushes as five different rushers toted the ball. The big play came after Blake Bradley had a three-yard gain to the Bear 22 and the Bears received a personal foul on the play and the Bobcats set up at the 11.
On the next play, Louvier bolted over the left side for an 11-yard touchdown run. The Bobcats had to go for two and they executed it perfectly when quarterback Mason Gonzales hit back Hunter Evans along the right side of the end zone to tie it at 35-35 with 1:46 remaining.
The Bears promptly marched from their own 30 all the way to the Bobcat 5 getting two big 17-yard runs by fullback J’Lon Douglas and two Bickham passes to Brown that netted 30 more yards. The Bears had first-and-goal from the Bobcat 5 but time was not on their side. With 0:04 remaining, LC-M elected to kick a 22-yard field goal by John Gonzales but the kick was short and the game went into overtime.
The Bobcats will return to action next week when they host the
Beaumont Kelly Bulldogs. The Bears will have their bye week and will
visit TAPPS powerhouse Houston St. Pius Sept. 30.

By Ronnie Hughes Leader Correspondent WEST ORANGE — The Mustangs of West Orange-Stark continued their dominant 2016 campaign as they... read more