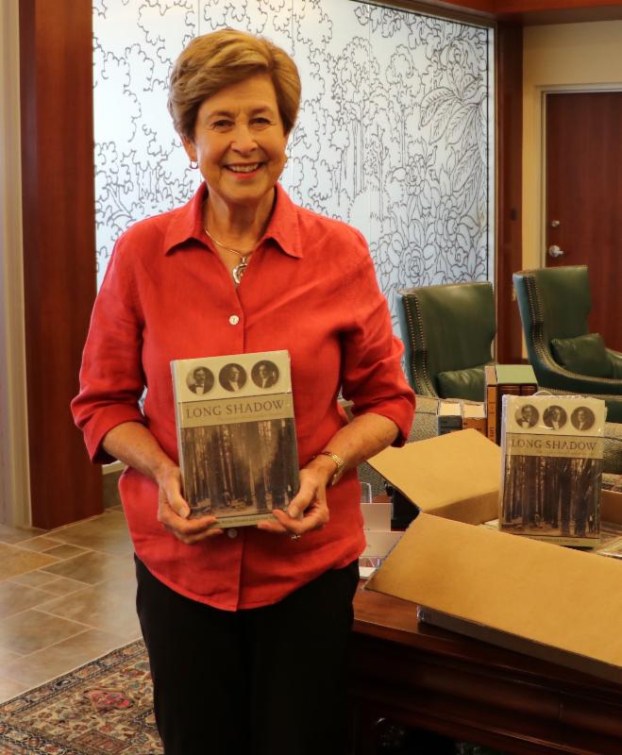 Special to The Leader
The Board of Directors of the Nelda C. and H.J. Lutcher Stark Foundation is pleased to announce the release of The Long Shadow: The Lutcher-Stark Lumber Dynasty, a 2016 publication of the University of Texas Press, that presents a history of three exceptional generations of Texans whose progenitor, a Pennsylvania butcher-turned-lumberman named Henry Jacob Lutcher, came to Southeast Texas in 1877 in search of new timber sources.

In Orange, he founded the Lutcher & Moore Lumber Company, at one time reputed to be the largest lumbering concern in the nation.  Lutcher’s spouse, Frances Ann, became a noted philanthropist in her own right, directing the construction of a church and hospital in Orange.

Their older daughter, Miriam, married capitalist William Henry Stark, who expanded and diversified the family enterprises.  Miriam became a noted rare book collector who ultimately donated her collection to the University of Texas.  The Starks’ son, Henry Jacob Lutcher Stark, became a major philanthropist who benefited countless charities in his home region and at the University of Texas, serving for almost 24 years on its Board of Regents.

For nearly a century, the Lutcher and Stark families significantly influenced the history and development of East Texas, the American lumber industry, and the University of Texas.  And through the Nelda C. and H.J. Lutcher Stark Foundation, established by Lutcher Stark and his third wife, Nelda, the family’s legacy lives on.

This work places the families within their times, divesting them of legend and presenting them factually as the remarkable human beings they were.  The work portrays a region of Texas distinct in culture, history, and terrain, while revealing an intriguing human saga of the daily lives, vicissitudes, triumphs and tragedies of one extraordinary family.  The history also represents the first in-depth treatment of primary material from the Stark Foundation Archives, which has never before been made available to the public.

Ellen Walker Rienstra and Jo Ann Stiles authored The Long Shadow: The Lutcher-Stark Lumber Dynasty. Ellen Walker Rienstra is a historian and author currently contracted by the Nelda C. and H.J. Lutcher Stark Foundation in Orange, Texas.  She has coauthored several books, including A Pride of Kin and Giant Under the Hill: A History of the Spindletop Oil Discovery at Beaumont, Texas, in 1901.

Jo Ann Stiles taught in Lamar University’s history department for more than three decades before retiring as an associate professor emeritus.  She has worked as an independent author and researcher, coauthoring Giant Under the Hill and other projects.

To commemorate the release of the publication, a celebration event is planned for Tuesday, September 20, 2016 at the Lutcher Theater, 707 Main, Orange, Texas. Books will be available for purchase beginning at 5:30 p.m. on the second floor lobby. Purchase price of the book is $48.75, which includes tax. There is a limited number of these 1st edition books available so don’t miss out.

Remarks by the authors, Rienstra and Stiles, will take place in the Lutcher Theater auditorium at 6:30 p.m., immediately followed by a reception and book signing in the Theater lobby. The September 20, 2016 book signing event will be the first opportunity that the Lutcher-Stark book, The Long Shadow, will be available for purchase.

This event is open to the public and admission is free.

PRESS RELEASE —  Pinehurst Police Department would like to thank the public for its help in identifying the white female responsible... read more