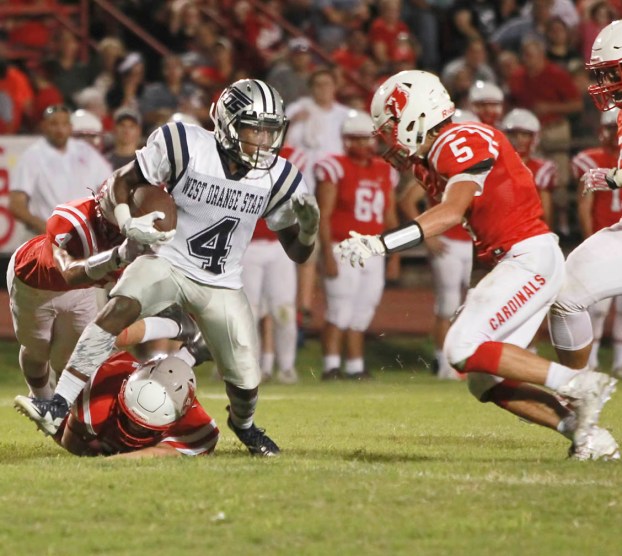 Mustangs will welcome in Gators

After all, the Mustangs (3-0) have outscored their three opponents 142-0 with three straight shutouts against quality Southeast Texas opponents Nederland, LC-M and Bridge City.

Three down, and three to go as the Mustangs look to stay healthy for another run at the District 12-4A Division II title and another deep run into the postseason for Coach Cornel Thompson.

The Mustangs will welcome in the winless KIPP Northeast Gators Friday at Hooks Stadium before they take on Silsbee and Kennedale in back-to-back weeks.

WO-S will open 12-4A play Oct. 7 at home against Hamshire-Fannett.

The Mustangs have been dominating in all phases of the game as they have dismantled all three opponents, which were all larger schools.

WO-S’ defense has been stifling to say the least as the Mustangs have put up astronomical numbers on the defensive side of the ball.

The Mustangs are only allowing 89.7 yards a contest, which is nearly unheard of these days.

Opposing offenses have really struggled, especially with their running games. The Mustangs have allowed only 175 rushing yards on 122 carries as opponents are averaging just 1.4 yards a carry.

Opposing quarterbacks have completed only 18-of-35 passes for 94 yards and three interceptions.

The Mustang offense, taking advantage of short fields, is gobbling up 337 yards a contest.

Quarterback Jack Dallas has completed 28-of-48 passes for 388 yards and four touchdowns with just one pick.

Tailback Jeremiah Shaw has zipped for 260 yards on 25 carries in averaging 10.4 yards a tote. He has a total of eight TDs and also has six catches for 81 yards. Backup tailback Kavyn Cooper has 113 yards and a TD on 19 carries.

Keion Hancock leads WO-S with nine receptions for 131 yards. Fellow receiver KJ Miller has six grabs for 76 yards and a TD but has done plenty of damage in the return game.

Miller has seven punt returns for 275 yards and a pair of scores, averaging 39.3 yards a return. He also had a 90-yard kickoff return against Bridge City last week.

The Mustangs will be at home again next week when they welcome in Silsbee.

The Gators will check in with a 0-2 mark after losses to start the season against Lutheran North (39-8) and to KIPP New Orleans (44-14). The Gators saw their game against Galveston O’Connell get canceled last week due to bad weather.

Coach Thompson came away impressed with the Gators after watching plenty of film on them. He likes their speed and skill people and they have good size across the board.

Quarterback Desmond Houston, who has good arm according to Thompson, will lead the Gator offense.

He has plenty of backs to get the all too, especially a go-to guy in Ricky Bell along with swift tailback Emile Mulonda and bruising fullback Terrance Holden. Receivers Deveon Provo and Patrick Basanga have also been solid at catching the ball.

The 2016 7th Grade Orangefield Bobcat football team got off to a fast start, and continued to play great football... read more