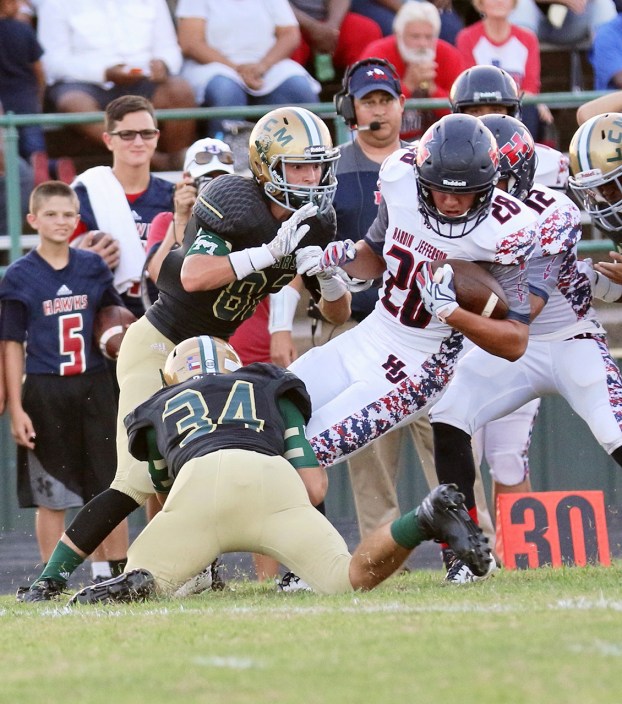 LITTLE CYPRESS — Finding their offensive “groove” last week, the Little Cypress-Mauriceville Battlin’ Bears will try to keep the pace up while the Orangefield Bobcats look to end a tough two-game stretch when the two squads battle it out at Battlin’ Bear Stadium Friday night.

LC-M had a huge offensive explosion as they shredded through the H-J defense for 494 total yards.

The Bears switched up their offensive scheme as they got back into a spread-style offense after running the Slot-T power game the first two weeks.

It certainly paid dividends. LC-M averaged just 150 yards a game in their opening losses to Jasper and West Orange-Stark but increased it to 264.7 after the big win last week.

Tailback Chris Winters ran through the H-J defense for 209 yards and three touchdowns and now has 290 yards on 58 carries for the season.

Bear fullback J’Lon Douglas broke out against the Hawks with 130 yards on 11 totes and fellow back Kayne Williams has over 100 yards for the season.

Bear quarterback Beau Bickham passed for 134 yards and a TD last week and has completed 13-of-25 passes for 208 yards for the season.

Orangefield is allowing 253.3 yards a game. After allowing Buna just 111 yards in their season opener, the Bobcats have allowed 324.5 in their last two outing, including 317 to Woodville, which came all on the ground.

The Bobcats will look to get their Slot-T running attack churning after gaining just 182 total yards against Woodville.

Orangefield back Christopher McGee had another strong game last week with 94 yards on 12 carries and now has 242 yards on 27 carries for the campaign.

Fellow backs Wesley Frillou and Hunter Evans have teamed up for nearly 200 yards while quarterback Caleb Kress has over 100 yards and has found the end zone three times.

Despite their 1-2 start, the Bears have been pretty solid on the defensive side of the ball, allowing 245.7 yards a game.

This will mark the first meeting between the two schools since 2005 when the Bears came away with a 28-6 victory.

The Bobcats will return to action next week when they play host to Beaumont Kelly.

The Bears will have their bye week next week and will visit powerful TAPPS member Houston St. Pius on Sept. 30.

BRIDGE CITY — For the second straight week, the Bridge City Cardinals will face one of the state’s most formidable... read more