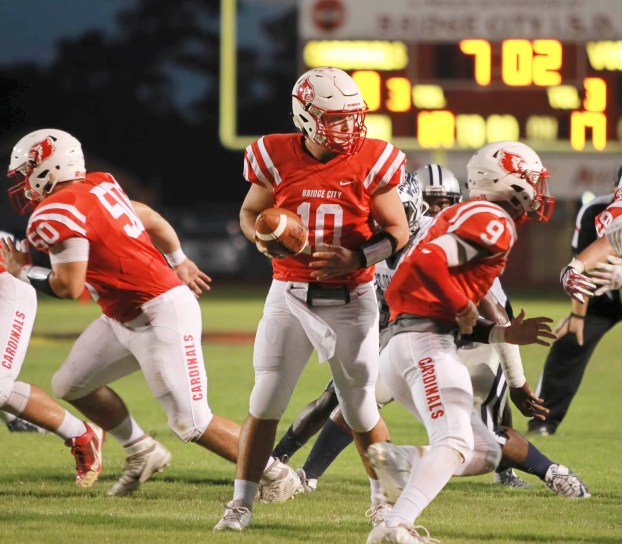 BRIDGE CITY — For the second straight week, the Bridge City Cardinals will face one of the state’s most formidable foes when they hit the road Friday to take on the Newton Eagles.

The Cardinals (2-1) will look to shake off last week’s 55-0 home loss against Class 4A No. 1 West Orange-Stark as they will look to test Class 3A power Newton, which checks in at a perfect 3-0.

After averaging 497 yards a game and scoring 112 points in big wins over Hamshire-Fannett and Houston North Forest, the Cardinals will try to bounce back against the Eagles after collecting just 135 yards against WO-S.

The Cardinals are churning out 376.3 yards a game with their vaunted Slot-T offense.

Cardinal tailback Cayce Draper picked up 119 yards on 22 tough carries against a stout WO-S defense and now has 310 yards and four touchdowns for the season despite missing the North Forest game with an illness.

The Cardinals’ mammoth offensive line will try to unleash more running backs at the swift Newton defense, including Patrick Morris and Max Baker, who both had 100-yard outings against North Forest.

The Eagles, as usual, have played a tough early season schedules and have been impressive.

They opened the season with a 27-0 home shutout of a good Kirbyville unit and have since went on the road to defeat both Silsbee (49-33) and Diboll (35-7).

Newton welcomed back eight starters on both sides of the ball from last year’s 3A regional semifinalist squad.

Senior quarterback Brock Barbay is a tremendous leader for the Eagle offense.

The Eagles are loaded in the backfield with all-district back Broderick Spikes along with Ty Seastrunk, Tamauzia Brown, Darwin Barlow and Josh Foster.

Barbay had a four-touchdown passing performance as well against Silsbee and has nice targets in the forms of Antwaine Hunter and Caleb Summeral.

Defensively, the Eagles are especially stout up front with the return of all-district players Chris Conner, Tajhwan Denson and Deviun Kenebrew and the Eagles return all four starters in the secondary, including all-district picks Kirkland Foster and D.J. Seastrunk.

The Cardinal defense is allowing 287 yards a contest after giving up 372 to WO-S last week.

This will mark the eighth meeting between the two programs. Newton leads the series 5-2 but the Cardinals soared to a 18-13 victory last season.

Bridge City will have off the next two weeks with two byes after Brock pulled out of a game that was going to take place in College Station Sept. 30. The Cardinals will not return to action again until Oct. 7 when they host Cleveland to crank up District 10-4A Division I play.

Mustangs will welcome in Gators