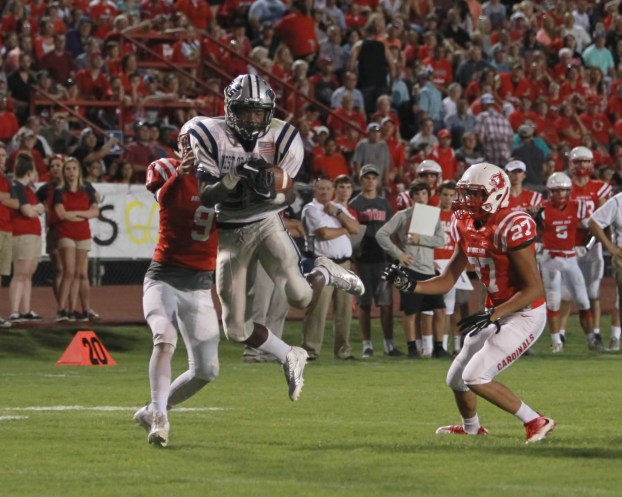 Mark Pachuca/The Orange Leader WO-S defensive back Teshaun Teal (25) picks off a Bridge City pass and returned it 10 yards for a touchdown.

To say the West Orange-Stark Mustangs have opened their 2016 campaign would be a major understatement at this point.

The defending Class 4A Division II State Champions rolled into Bridge City Friday night and humbled the Cardinals 55-0 in front of a capacity crowd.

The Cardinals (2-1), who entered the game averaging 497 yards a game, were stymied by the WO-S Chain Gang defense all night as Bridge City netted just 135 total yards.

The Mustangs are yielding just 93 yards a game through three tilts.

Meanwhile, the WO-S offense piled up 372 yards of total offense, including a season-high 272 on the ground on just 24 carries.

WO-S also got another huge boost in the return game as senior KJ Miller shredded the Cardinal special teams for a kickoff return touchdown and a punt return for another.

Mustang running back Jeermiah Shaw had 127 yards on eight carries and scored on two runs and caught a TD pass while Keion Hancock rushed for 54 yards on just three totes.

WO-S quarterback Jack Dallas completed 9-of-16 passes for 100 yards and a pair of scores.

Bridge City fullback Cayce Draper had a superb outing as he paced Bridge City with 119 tough yards on 22 carries.
“We’re so proud of the kids, they put together a strong 48 minutes of football,” said WO-S coach Cornel Thompson. “We had some electric plays on special teams, that dang KJ Miller has been something else. Offensively, we did some things we wanted to do. Proud of our guys up front, we were able to open up our running game a bit.”

Thompson was proud of the way the Mustangs slowed down a vaunted Slot-T Cardinal running game that led to 112 points in Bridge City’s first two wins.

“Coach (Dwayne) DuBois knows that offense inside and out,” said Thompson. “He did it well while he was at Vidor and did the same thing at H-J and now here in Bridge City. We’ve seen that offense so much from all the people we’ve played the last couple years and our kids have been great at slowing it down and they did it against a pretty good football team tonight. Bridge City will make some noise down the road, I hope they go 8-1.”

DuBois came away impressed with the Mustangs.

“We totally got outplayed in all three phases of the game,” said DuBois. “Make it four, we got outcoached tonight and ‘ll take the blame for that. WO-S plays with so much intensity and we needed our kids to match that. We didn’t have a great week of practice leading up to this and it showed. We’ve got to bounce back next week because it doesn’t get any easier by going to Newton. I think the kids will grow and learn from this and we’ve got to bounce back. One more non-district game then district will be here and we want to be ready.”

After Bridge City mustered just a seven-yard punt after their first series, it took the Mustangs just two plays to march 46 yards to hit paydirt.
Shaw broke loose for a 41-yard spurt off left tackle and down the sideline to the BC 5. On the next play, Dallas took a keeper off left tackle for  a five-yard touchdown jaunt. Dallas also ran in the
two-point conversion run to give the Mustangs the 8-0 edge with 7:11 left in the first quarter.
The Mustangs got it done on defense on the next series. WO-S had the Cardinals backed up facing a third-and-17 from the BC 10 when WO-S linebacker Teshaun Teel read a screen perfectly, stepping in front of a Byron Trahan pass, and took it 10 short yards to the end zone for the score. Chad Dallas booted the extra-point to make it 15-0 with 5:35 in the first.
WO-S put together a seven-play, 57-yard scoring drive near the end of the first quarter to go up 22-0.
Jarron Morris broke loose for big runs of 12 and 23 yards. Dallas connected with receiver KJ Miller for an 18-yard gain and WO-S capped it when Dallas threw a dart to the left side to receiver Jay’Len
Matthews, who bolted into the end zone with 1:20 in the first.
The Mustangs outgained the Cardinals 113-12 in the first quarter.
WO-S put together a 63-yard, eight-play drive that turned in a 23-yard field goal by Chad Dallas.
WO-S saw a 67-yard touchdown pass from Dallas to Keion Hancock called back after a pair of penalties, forcing them into a first-and-31 from their own 12.
However, Dallas completed back-to-back passes to Morris and Shaw that went for a combined 33 yards to get a first down. Shaw had an 11-yard run, Blake Robinson hauled in a 14-yard pass from Dallas and back Kavyn Cooper scooted on a 17-yard run down to the Cardinal 13.
The Bridge City defense stiffened up and Dallas converted his 23-yard field goal to make it 25-0 with 4:59 left in the half.
After a four-yard Bridge City punt gave the Mustangs the ball at the Cardinal 20 late in the half, WO-S could not capitalize. The Mustangs got all the way to the Cardinal 6. Dallas completed a five-yard
touchdown pass to Miller that was negated by a big penalty that moved it back to the 20. WO-S tried a 41-yard field goal by Chad Dallas that fell short at the 1:01 mark.
The Mustangs outgained the Cardinals 221-46 in the first 24 minutes, limiting the Cardinals to just three first downs.
Penalties did hamper WO-S as the Mustangs had seven penalties for 71 yards.
Dallas completed 8-of-14 passes for 80 yards in the half. Shaw had 58 yards on five carries while Dallas and Morris combined for 69 yards on seven totes.
Draper had 57 yards on nine carries and did break away for a 23-yard blast near the end of the half.
The onslaught continued for the Mustangs when Miller dazzled the crowd by taking the second-half kickoff through the middle of the Cardinal special teams en route to a 90-yard touchdown return to make it 31-0 with 11:44 in the third.
After forcing a Cardinal turnover at the Bridge City 47 with 10:10 in the third, it took the Mustangs just three plays to score. Hancock had a stout 27-yard run, breaking several tackles to the BC 20.
Two plays later, Dallas hooked up with Shaw on a perfectly executed screen that went 20 yards down the left side, Shaw broke through two tackles to find the end zone, putting WO-S up 38-0 with nine minutes in the third.
WO-S’ Ronald Carter blocked a Bridge City punt as the Mustangs got the ball at the Cardinal 20 with 6:43 in the third.
Two plays later, Shaw bolted through the middle of the Cardinal defense, breaking tackle after tackle attempt as he bulled his way all the way to the end zone, pushing the lead to 43-0 with 6:02 in the
half.
Miller made the Cardinal special teams pay again when Bridge City punted it right too him. Miller hauled it in at the WO-S 15 and cut right up the middle and outsprinted the Cardinals 85 yards to the end zone, making it 49-0 with 3:07 in the third.
Shaw broke through for another big run early in the fourth qurter when he split through the Cardinal defense for a 50-yard touchdown sprint to paydirt, pushing it to 55-0 with 10:32 left.
The Cardinals almost avoided the shutout with a 10-play, 40-yard drive behind hard running by Draper but kicker Alfredo Heraldez’ 24-yard field goal attempt was missed with 5:04 remaining.
The Mustangs will return home next week to take on Houston Kipp Academy while the Cardinals turn to the road and will visit 3A state powerhouse Newton.

And they are off…

Young and not as young as they once were gathered for fun and games as neighbors challenged neighbors in races... read more