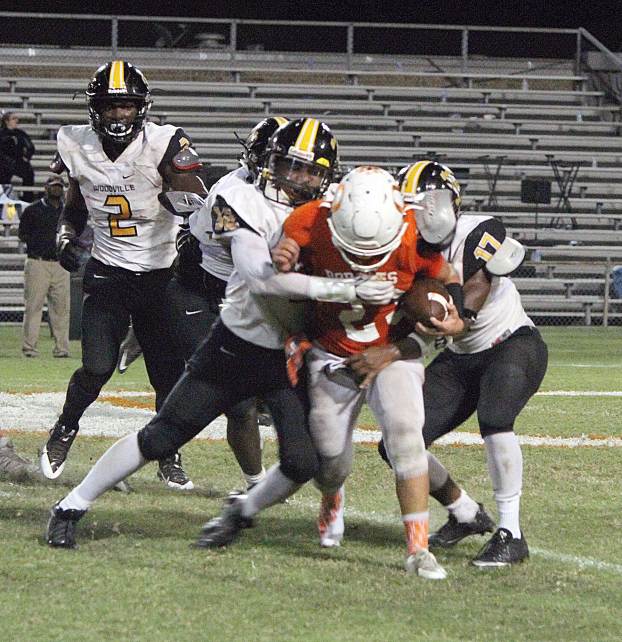 Leader Photo by Tommy Mann, Jr. The Woodville Eagles defense kept the Bobcats offense on its heels much of the night. Orangefield running back Christopher McGee (23) is stopped for a loss by Keviante Wise-Salinas (32) and Jairus Williams (17) in the second half of Friday’s 41-7 loss to Woodville.

ORANGEFIELD — Woodville’s running game stole the show Friday night at Orangefield as the Eagles got past the Orangefield Bobcats 41-7 in non-district action.

Ivan Lockhart ran 10 times for 155 yards, and Zack Martin had 12 rushes for 86 yards as the Eagles improved to 3-0 on the young season.

The Eagles finished with 317 yards, all coming via their ground game.

The Bobcats finished with 182 total yards, 162 of it on the ground.

Orangefield’s defense couldn’t find a way to stop the Eagles early.  The Bobcats (1-2) got stronger on defense in the second half until late in the fourth quarter when the Eagles ran off 19 unanswered points to pull away.

The Bobcats’ prime running back Christoper McGee lead the team in total yards and rushing yards with 12 rushes for 94 yards.  He tried to carry the Bobcats on his back the Bobcats had it tough trying to generate offense.

Woodville has the first scoring drive of the game after a lost fumble from the Bobcats.  Ivan Lockhart started the drive from the Bobcat 41 with a 20 -yard run. The Eagles did not look back as they topped off a six-play drive with a Kris Traylor two-yard touchdown run.  The two-point conversion was no good making the score 6-0 Woodville.

Orangefield quickly answer on the very next drive.  A Caleb Kress pass went to wide receiver Andrew Hoyland for a long 20-yard completion.  That set up the run game for the Bobcats and a Kress one yard touchdown run.  The PAT from Jacob Rainey was good making the score 7-6 Bobcats.

Woodville would answer with a drive from their own 39 and five plays in the second quarter.  Lockhart was the work horse for the Eagles on the ground with 33 rushing yards and the touchdown.  The two -point conversion was good making the score 14-7 Eagles.

After another lost fumble for the Bobcats, the Eagles take over on the opposite 30.  The Eagles stuck to the ground all drive long handing it off to five separate running backs for yards and a touchdown from Traylor from three yards out.  The two-point conversion was good making the score 22-7 Eagles.

The third quarter for both teams was unsuccessful with multiple turnover on downs and punts for either team.  To begin the fourth quarter Woodville started on their own 44.  After a 15-yard penalty against the Eagles, running backs Lockhart and Zack Martin ran down the field for two first downs.  Lockhart finished the drive with a 31-yard touchdown run.  The two-point conversion was no good making the score 28-7 Eagles.

On the Eagles’ next drive Lockhart took it the distance for 60 yards and a touchdown.  The PAT was good from Whitehead and made it 35-7.  Towards the end of the fourth the Eagles manage to tack one more touchdown on the board from another fumble by the Bobcats.  Tristen Mitchell recovered the fumble and took it 41 yards for a touchdown.  The two-point conversion was no good resulting in the final score 41-7 Woodville Eagles taking the win.