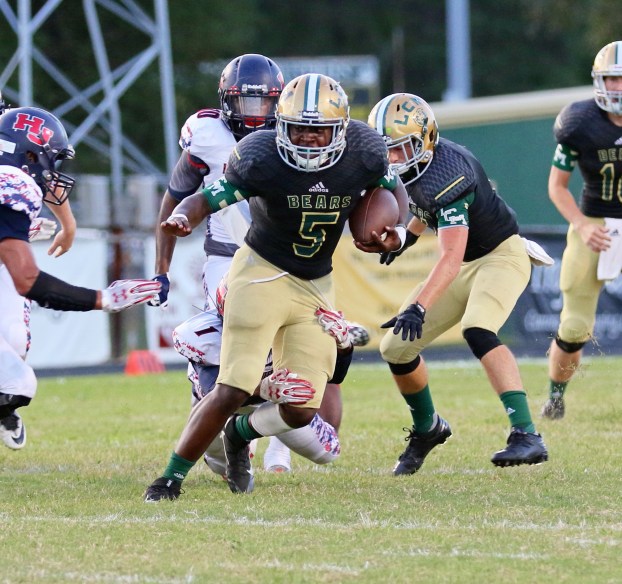 Leader Photo by Joey Dupuy LC-M back Chris Winters (5) goes for a big gain against Hardin-Jefferson.

LITTLE CYPRESS — A stellar offensive showing catapulted the Little Cypress-Mauriceville-Bears to their first win of 2016.

TheBears overcome a plethora of penalties with 494 total yards of offense to down the Hawks of Hardin Jefferson 40-20 at Battlin’ Bear Stadium.

Chris Winters propelled the Bear offense with 209 yards on 28 carries while quarterback Beau Bickham lit up the scoreboard early. throwing for 139 yards and two touchdowns.

The Bear defense stepped up early with Osiel Ibarra intercepting Hawks quarterback Braydon Pelt on the second play from scrimmage. The interception gave the Bears excellent field position at the Hawk 38.

It didn’t take long for Bickham and the Bear offense to get things rolling. A couple of quick carries by Winters gave way to a big-time catch by Katon Brown, who bobbled the ball all the way to the ground and was able to reel in the catch for a 28 -yard touchdown from Bickham. The Bears lead was 7-0 with 9:47 left in the first quarter. This was Brown’s rookie performance being his first game on varsity.  He had two catches for 61 yards in his debut.

The Hawks attempted to get things rolling on their next possession and received help from the Bears with a free 15 yards thanks to a personal foul. Fortunately for Bear fans the Hawks coughed up the ball at the Bear  44 with Alex Reed making the recovery for the Bears. The Battlin’ Bear defense forced two turnovers in the first half of play.

The LC-M offense kept on rolling on the next series. A trips right formation for the Bears gave way to a huge 42-yard touchdown pass to Keegan Sonnier who was able to torch the Hawk secondary for the easy catch. The touchdown put the Bears in control, 14-0 with 5:12 still left in the first quarter of play. Sonnier grabbed three receptions for 61 yards on the evening.

Mason Murray came up huge for the Hawks, finally breaking a long play from scrimmage going 34 yards with a personal foul tacking on an extra 15 yards. Cole Priddy ripped off a 15-yard touchdown run to pull the Hawks within one score, 14-7.

The Hawks defense would hold the Bears finally to give the offense a shot to keep them in the game. Following a 38-yard run by Winters the Bear offense walked backwards several yard and was forced to punt back to the Hawks to end the first quarter of play.

Hardin Jefferson opened the second quarter with another three-and-out as the offense found little room to run against the Bears defense. After an exchange of punts the Hawk defense stepped up to snag an interception. Greyson Kash intercepted a Bickham pass and returned the ball 34 yards down to the Bear 1. The Hawks struggled to gain that one yard for a score, but overcame three stuffed runs to finally send Talon Tilly into the endzone for a touchdown. A missed extra point kept the Bears out front by one, 14-13 with nearly three minutes on the clock for the Bear offense to work with.

Winters got the Bear offense back on track with six carries for 52 yards before breaking a quick six-yard run for a touchdown leading to a 21-13 lead at the end of the first half. Winters had rumbled for 109 yards in the first half while notching three total touchdowns on the night.

J’Lon Douglas erupted for the Bears offense to start the second half. Douglas torched the Hawks defense for 64 yards on six carries during the drive to make way for another Winters’ touchdown and a 27-13 advantage with a lot time left in the third quarter.

Kelechi Nwachuku took control of the Hawk offense on the next series. He launched up the middle into the secondary before galloping down the sidelines for a 73-yard touchdown on the first play of the possession. The score momentarily pulled the Hawks within one touchdown, 27-20 with just over six minutes left in the third quarter.

The Bears were quickly forced to punt after failing to garner much on the next possession. The punt would pin the Hawks deep in their own territory at the 1. Braydon Pelt slung a gutsy pass from the shadow of the end zone 49 yards to Blake McKinley for a first down, but the momentum was stalled by a sack and penalty that forced the ball back to the Bears. Pelt was 2-of-8 passing on the night for 50 yards with one interception.

It was all Bears the rest of the way out. Douglas grabbed a short touchdown with Winters capping his excellent night with another touchdown to close out the victory for the Bears.

The Bears (1-2) will look to build on this win as they host the Orangefield Bobcats next Friday. The Hawks (1-1) will kettle together to fix their offensive woes before the Kelly Bulldogs play a visit in week four of the high school football season.

By Van Wade Van.Wade@orangeleader.com BRIDGE CITY – 142-0. To say the West Orange-Stark Mustangs have opened their 2016 campaign would... read more