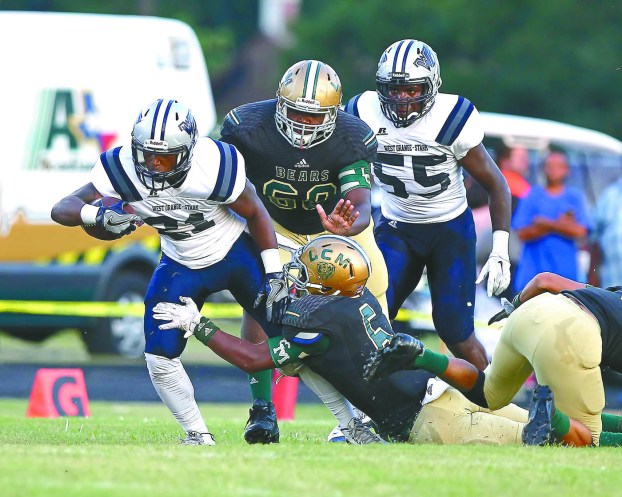 BRIDGE CITY — Something has got to give Friday night when the Bridge City Cardinals welcome in the West Orange-Stark Mustangs for arguably one of the better non-district football encounters that have been lined up this season.

Both the Cardinals and Mustangs check into this one with perfect 2-0 marks after each have blown away their first two opponents.

This will mark the 25th meeting between the two squads as the Cardinals are still seeking their first win against the WO-S program.

The Mustangs, the defending Class 4A Division II State Champions and ranked No. 1 in the state in the latest Associated Press Class 4A state poll, have recorded back-to-back shutouts over Nederland and Little Cypress-Mauriceville.

Meanwhile, the Cardinals have dominated both Hamshire-Fannett and Houston North Forest in their two affairs thus far.

The teams have certainly done it with different styles.

The Mustangs silenced both Nederland (a 42-0 win) and LC-M (45-0) with their smothering defense.

WO-S allowed Nederland just 81 total yards and held the Bears to just 63. In two games, the Mustangs are allowing a mere 72 yards a game.

The Cardinals have crushed opponents with their high-octane Slot-T offense that have put lumps on opposing defenses.

The Cardinals have tallied 112 points in their two outings in their wins over H-F (56-15) and North Forest (56-12) as a slew of backs have benefitted running behind a veteran offensive line.

The Redbirds zipped for 479 yards on the ground last week against North Forest with backs Patrick Morris, Max Baker and Andy Lara all going over the century mark as they teamed up for seven of the touchdowns.

All-District running back Cayce Draper, who rushed for 1,300 yards last season and who had 191 yards and four touchdowns in the win over H-F, sat out last week’s win due to an illness and should be ready to roll against the Mustangs.

In their two blowout victories, the Mustang Chain Gang defense has allowed just 51 rushing yards on 68 carries and a total of just 11 first downs.

Offensively, the Mustangs will check in averaging 311.5 yards a game, a deceptive number considering the excellent field position they have received due to their excellent defense and special teams return game.

Senior quarterback Jack Dallas has completed 19-of-32 passes for 312 yards and a pair of scores.

KJ Miller is a dangerous weapon as well at receiver and has shown an amazing flash as a return man. Last week against LC-M, he had back-to-back punt returns that accounted for 112 yards, one of them that went 66 yards for a score.

The Cardinals have proved their might on the defensive end in their two wins. They limited H-F to 277 total yards and then held an explosive North Forest squad to just 212 last week.

The last meeting between the Cardinals and Mustangs came in 2013 with the Mustangs walking away with a 40-13 victory.

The Mustangs will return home next week when they play host to Houston KIPP Academy while the Cardinals will take to the road to take on Class 3A power Newton.

LITTLE CYPRESS — Looking to get their feet back on solid ground, the Little Cypress-Mauriceville Battlin’ Bears will be seeking... read more