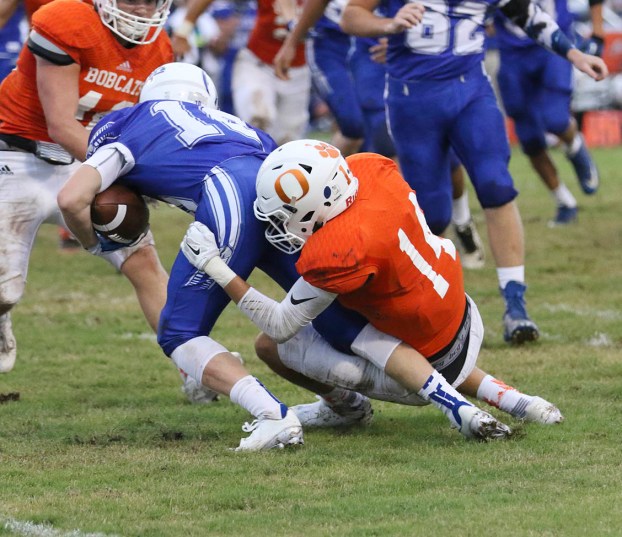 Leader Photo by Joey Dupuy Orangefield's Zach Norman makes a tackle against Buna in Week One.

ORANGEFIELD — After romping past Buna 45-0 in their season opener, the Orangefield Bobcats will look to bounce back after suffering a tough 21-7 road loss at the hands of the Kirbyville Wildcats last week.

However, there will be a tough challenge for the Bobcats (1-1) this week as they welcome in a very experienced Woodville (2-0) unit.

This will mark the 17th meeting between the Bobcats and Eagles. Orangefield leads the all-time series 12-4. The Bobcats have won seven straight, including a 28-6 victory in their last meeting in 2011.

The Eagles, who return 16 starters off a 7-4 playoff team for first-year coach Ty Robinson, throttled Corrigan-Camden 51-0 in their home opener and then went on the road last week to turn back Madisonville 28-14.

After totaling 322 yards in the win against Buna, the Bobcats had 231 against Kirbyville and average 276.5 yards a game entering the Woodville battle.

Wesley Frillou has rumbled for 100 yards on 15 carries while Hunter Evans has 80 yards and quarterbacks Caleb Kress and Mason Gonzales have 80 yards combined and three touchdowns.

The Bobcats have been solid on defense, despite allowing 332 yards against a swift Kirbyville unit.

Orangefield is allowing 221.5 yards a game and held Buna to just 111 in their opener. The Bobcats forced three turnovers against Buna, which is what they will look to do when the high-flying Eagles roll in Friday night.

Eight starters return to the Eagle offense.  Again, the triggerman will be junior quarterback David Whitehead.  But the motor of the offense will be again be senior running back Ivan Lockhart.  Out wide, receiver Julius Midkiff and junior Christian Williams will be the favorite targets for Whitehead.  Senior offensive tackle Seth Cashat and junior offensive tackle Cade Bass will anchor the Woodville offensive

The Bobcats will hit the road next week when they visit Little Cypress-Mauriceville.