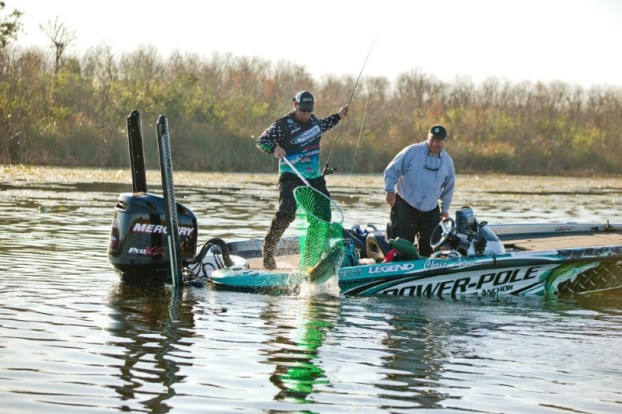 Photo by James Overstreet/Bassmaster The 2017 Bass Pro Shops Bassmaster Opens Series tournament season kicks off on the Harris Chain of Lakes in Leesburg, Fla., Jan. 19-21. At this same fishery in January of 2012, Bassmaster Elite Series pro Chris Lane earned his third B.A.S.S. win by bringing 72 pounds, 11 ounces to the scales.

BIRMINGHAM, Ala. — From the lakes of central Florida in mid-January to the Ozark Plateau of Oklahoma in early October, bass tournament anglers will find a variety of dates, locations and fisheries to challenge them in the 2017 Bass Pro Shops Bassmaster Opens Series schedule, which B.A.S.S. announced today.

Nine Bassmaster Opens tournaments will be held in eight different states next year. Fisheries range from natural lakes to rivers to upland reservoirs, and from big-bass factories to tidewater fisheries that can humble the best in the sport.

Opens are divided into three separate divisions of three events each. The Opens Series has become extremely popular in recent years as the primary qualifying events for the prestigious Bassmaster Elite Series. The Top 5 anglers from each of the three divisions (after excluding any Elite anglers who are already qualified for that tour) are invited to step up to the pinnacle of professional angling.

In addition, the winner of each Open earns a berth in the 2018 GEICO Bassmaster Classic presented by GoPro, contingent upon his or her fishing the other two events in that Opens division.

The tournaments feature fields of 150-200 pros and the same number of co-anglers fishing trying to amass the heaviest limits of bass — five for the pros and three for the co-anglers — for two days. The field is cut to the Top 12 in each division for the final day, with weigh-ins usually held at a nearby Bass Pro Shops.

It all begins on the Harris Chain of Lakes in Leesburg, Fla., on Jan. 19-21 with the first of three 2017 Southern Opens. The last tournament of the year will be the final Central Open, scheduled forOct. 5-7 on the famed Grand Lake O’ the Cherokees in Grove, Okla.

“The Bass Pro Shops Bassmaster Opens is not only a great way for an angler to make his mark in professional bass fishing, but these are also fun and rewarding tournaments in their own right,” said Bruce Akin, B.A.S.S. CEO. “We’re especially proud of being able to offer events on some of the most outstanding bass fisheries in the world, including three that have hosted the GEICO Bassmaster Classic.”

“Many of the most competitive Elite Series pros fishing today qualified through the Bassmaster Opens,” said Chris Bowes, Opens tournament director. “There’s not a better way to prove you’re ready to fish on the national stage.”

Deadlines for registration and other details about participation will be posted later this month on Bassmaster.com.

The Harris Chain is one of the more popular stops for B.A.S.S. The chain is made up of nine lakes connected by a system of canals, and it covers approximately 80,000 acres in central Florida just north of Orlando. Chris Lane won this event in 2012 with a whopping three-day total of 72 pounds, 11 ounces. Lake County Tourism is host of the event.

Lake Chickamauga is a reservoir covering just more than 36,000 acres along the Tennessee River, and was completed in 1940 as part of the Tennessee Valley Authority. BASSfest was held here in 2014, with Jacob Wheeler holding off Kevin VanDam and Matt Herren for the title. Chickamauga was also the site of the 1986 Classic, and it ranks third in the Southeastern division of BassmasterMagazine’s 100 Best Bass Lakes list for 2016. Hosting is the Rhea Economic and Tourism Council Inc.

A Bassmaster Southern Open returns to Smith Lake in 2017, after the lake was home to a rain-shortened tournament earlier this year. The 21,000-acre lake in north-central Alabama produced a $53,000 payday in cash and prizes to winner Jesse Wiggins. It is noted for its giant spotted bass and ranks 23rd in the Southeast on the 100 Best Bass Lakes list. The Chamber of Commerce of Walker County is the host.

Bassmaster Elite Series pro Mike McClelland broke a six-year drought by winning a tour stop here in 2014. Table Rock, which at 43,000 acres is plenty big enough for Open anglers to spread out, also was host to a Central Open in 2015. The fishery offers some compelling side trips for visitors, including the popular tourist destinations in Branson and the flagship Bass Pro Shops store in Springfield. The massive Wonders of Wildlife museum and aquarium at Bass Pro Shops should be open by tournament time. Host organizations are Branson/Lakes Area Chamber of Commerce and Convention & Visitors Bureau.

This river forming the southern portion of the border between Texas and Louisiana is a playground for Elite Series anglers, and it will welcome competitors in the second Central Open in 2017. Just navigating the network of bayous, sloughs, canals and backwaters is a challenge. Catching the heaviest limits of black bass can be tricky as well. Opens anglers will want to study the tactics of Elite Series standouts Chris Lane (who won in 2015) and Todd Faircloth (winner in 2013). The Greater Orange Chamber of Commerce is hosting the event.

Grand Lake has been home to not one, but two Bassmaster Classics (in 2013 and again in 2016). In 2013, Cliff Pace won the Classic with a three-day total of 54 pounds, 12 ounces. Earlier this year, it was Oklahoma’s own Edwin Evers earning a Classic win with a 60-pound, 7-ounce total. Kevin VanDam and Mike McClelland have won previous Elite Series events on this 46,500-acre impoundment, which ranks eighth in the central divisions of Bassmaster’s Best 100 Lakes listing. Hosting the tournament is the City of Grove, Okla.

B.A.S.S. heads to upstate New York for the first Northern Division Open of the 2017 season. Elite Series pro Randy Howell won an Open on Oneida in 2015 with a three-day haul of 49 pounds, 2 ounces, and this July, Wil Hardy won there with 53-13 over three days of fishing. At more than 50,000 acres, Oneida is the largest lake located entirely in New York, and this will be the 13th Bassmaster event on the fishery. It ranks 11th among bass fishing in the Northeast. Visit Syracuse is hosting the event.

The James River has hosted an even dozen Bassmaster events through the years, including a three-year string of Classics from 1988-1990. Guido Hibdon won the first Classic held here in 1988, and Hank Parker claimed the title in 1989. The legendary Rick Clunn won his fourth Classic on this river in 1990. In 2013, Randy Howell won an Open on the James to qualify for the 2014 Bassmaster Classic, which he won, and former Elite angler Charlie Hartley earned a return trip to the Classic with his James River win in August. Host is the Richmond CVB.

The final Northern Open stop of 2017 will be on this reservoir in eastern Tennessee. Douglas was home to an Open tournament in May 2016, and in 2012, pro Jeremy Starks boated a four-day total of 81 pounds, 2 ounces to win the Elite Series Douglas Lake Challenge and a $100,000 check. The Jefferson County Chamber of Commerce is host.

About B.A.S.S.
B.A.S.S. is the worldwide authority on bass fishing and keeper of the culture of the sport, providing cutting edge content on bass fishing whenever, wherever and however bass fishing fans want to use it. Headquartered in Birmingham, Ala., the 500,000-member organization’s fully integrated media platforms include the industry’s leading magazines (Bassmaster and B.A.S.S. Times), website (Bassmaster.com), television show (The Bassmasters on ESPN2), social media programs and events. For more than 45 years, B.A.S.S. has been dedicated to access, conservation and youth fishing.

Cherry Vigil is the Spanish Teacher at St. Mary Catholic School.  She teaches Spanish to PreK3 students up through the... read more