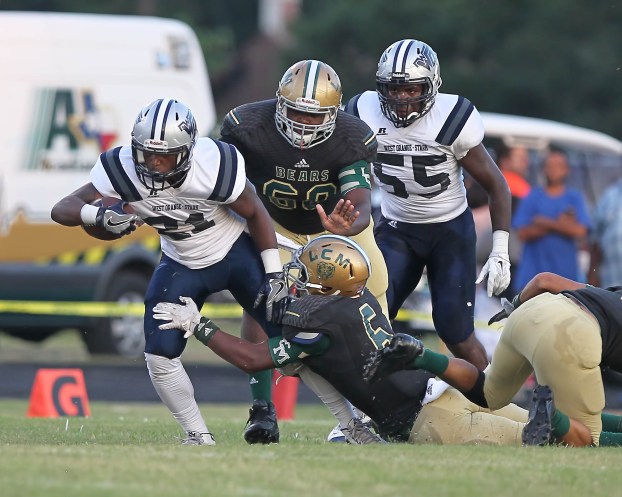 LITTLE CYPRESS – Utilizing big special teams plays in the first half and a dominating defense throughout, the West Orange-Stark Mustangs crushed the Little Cypress-Mauriceville Battlin’ Bears 45-0 to capture the The Orange
Bowl for the 18th straight time.
The defending Class 4A Division II State Champion Mustangs used the legs of punt return men KJ Miller and Jarron Morris to help enable WO-S (2-0) to a commanding 30-0 advantage at the half.
Miller had two punt returns that went for 112 yards in the first half, one a 66-yard touchdown, while Morris set up another score with a 50-yard return trip.

WO-S has allowed just 72 yards a game in their first two contests after shutting out Nederland 42-0 last week. The shutout against the Bears also marked the 101st shutout for the Mustang program.

“It was a good team effort,” said Mustang coach Cornel Thompson. “Defensively, we’re playing really well. Two shutouts in a row against bigger schools is nice but we know we still have some work to do. It’s a long season and we just want to show improvement each time we take the field.”

Mustang quarterback Jack Dallas completed 9-of-14 passes for 131 yards and two scores. WO-S tailback Jeremiah Shaw was the night’s leading rusher with 59 yards on just eight totes. The Mustangs finished with 259 total yards as they played on a short field most of the game.

“Offensively, we did some things well after that first series and the turnover we had,” said Thompson. “We were able to do some things we wanted to do. LC-M got after us pretty good defensively, especially in the first half.”

LC-M senior tailback Chris Winters led the LC-M arsenal with 41 tough yards on 19 carries and also had an interception.
The Mustang defense held the Bears to just 26 total yards and two first downs in the first 24 minutes as LC-M had 24 carries for 26 yards and completed one pass for no gain.
The first quarter certainly brought some early excitement as the Mustangs utilized their special teams to take a 9-0 lead.
LC-M’s Winters picked off a Dallas pass on the first play of the game at the Bear 40 and returned it all the way to the Mustang 28.
However, the Bears were called for an illegal block on the return and LC-M still got the ball, but at its own 32.
LC-M went three-and-out and Mustang senior return man Miller made the Bears pay as he fielded the punt at the Mustang 34, made a couple nice moves and then bolted down the left sideline for a 66-yard punt return touchdown. The point-after kick failed as WO-S grabbed a 6-0 lead with 9:11 in the first quarter.
The Bears punted to Miller again with 2:46 left in the first and Miller bolted 46 yards on another big return to set the Mustangs up at the LC-M 29.
Dallas connected with receiver Blake Robinson on a perfect sideline strike down the left side for a 24-yard gain to the 5.
Mustang Justin Brown saw his three-yard touchdown run called back due to a holding call. The Bears held the Mustangs at bay and Mustang junior kicker Chad Dallas nailed his first varsity field, nailing it from 25 yards out to put WO-S up 9-0 with 1:37 in the first.

“We’ve got some special folks back there returning kicks in KJ (Miller) and Jarron (Morris,” said Thompson. “They are lightning quick in the open field. We still made some mistakes in our kicking game that we will definitely have to address that we’re not too pleased with. We’ll be working on that, you can bet, as soon as we hit the practice field again.”
Only one first down was made in the first 12 minutes as WO-S had 22 yards while the Bears had none.
The special team magic continued for the Mustangs on the first play of the second quarter when return man Jarron Morris hauled in a punt and dashed 50 yards down the left sideline all the way to the Bear 2.
Jack Dallas followed with a two-yard quarterback keeper for the touchdown as the Mustangs increased the lead to 16-0 with 11:33 in the half.
The Mustangs put together a five-play, 60-yard scoring drive midway through the second quarter with one big play and took advantage of a pair of Bear penalties.
Dallas connected with Keion Hancock on a 24-yard strike that got down to the Bear 7. After the Bears were offsides, Mustang back Jeremiah Shaw bolted three yards and into the end zone off right tackle as WO-S upped the lead to 23-0 with 5:50 in the half.
The Bears tried a fake punt on fourth-and-4 from their 39 with 3:36 left but the Mustangs stuffed Winters for just a one-yard gain.
Dallas then completed 3-of-4 passes for 38 yards and capped it with a perfect 24-yard touchdown strike over the middle to Miller to push it to 30-0 with 1:43 in the half.
The Mustangs had 106 yards of offense in the half. Dallas was 6-of-10 for 88 yards. Hancock had two catches for 38 yards and Miller had three grabs for 26.
Winters had 11 carries for 32 yards in the half to spark the Bear offense. Penalties hampered the Bears in the half as they collected six for 53 yards.
WO-S struck quickly to start the second half.
After holding LC-M to another three-and-out, WO-S navigated 43 yards in just two plays to hit paydirt. Miller broke loose on a sweep to the right side for 30 yards and Shaw capped it with a 13-yard touchdown jaunt up the middle to push it to 37-0 with 8:46 in the third.
After forcing the Bears to punt again on a three-and-out, the Mustangs marched  55 yards in seven plays with Dallas capping it with a beautiful over-the-top 31-yard touchdown dart to receiver Dominque Tezeno to make it 43-0 with 3:05 in the third.
The Mustangs tacked on a safety with 5:17 when they brought Winters down in the end zone for a five-yard loss to make it 45-0.
The Mustangs, who lead the Bears 29-2 all-time in the series, will head to Bridge City for another Orange County showdown next week as they face the hot 2-0 Cardinals while the Bears will remain at home and will welcome the Hardin-Jefferson Hawks.

“Bridge City is playing really well and they have a great senior group and so do we,” said Thompson. “It’s going to be a hard rock to mine when we head to their place next week. Should be a great atmosphere.”