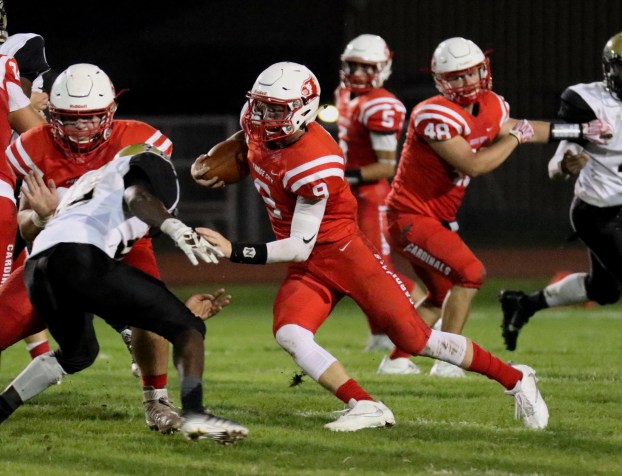 BRDGE CITY — The Bridge City Cardinals came into Week Two on their first home game of the season to face off against the Houston North Forest Bulldogs and the Redbirds made it look easy as they flew to a convincing 56-12 thumping in the first ever meeting between the two schools.

The Cardinals piled up 512 yards of total offense, 479 of it coming from their explosive running game.

Back Patrick Morris and Max Baker combined for 240 yards and five touchdowns with Baker rushing for 122 yards and Morris 118. Freshman Andy Lara also rushed for 89 yards and two scores.

Bridge City’s defense held strong in the first half of play only giving up six points and 120 total yards. The Cardinals took the lead and never looked back. The defense for the Cardinals stood tall with multiple sacks from the defense and an interception from Justyn Romero.

The game was won early in the trenches for Bridge City (2-0) and the Cardinals never gave up much ground. The running back group was missing Cayce Draper, who had strep throat, but the gaps the offensive line made, made up for it, giving Morris, Baker and Lara more than enough room to make plays.

North Forest (0-2) got the first possession of the game at their own 26. After a short three plays the Bridge City defense forced a punt and the Cards took over at the Bulldog 46. The drive started with a couple of penalties from both teams, then running back Morris broke off for a 15-yard Cardinal touchdown. After another penalty by the Cards, the point after touchdown was no good making, it 6-0 Bridge City.

North Forest was unable to convert and the Cardinals hit paydirt again. Morris has another touchdown run, but this time he went further, going 45 yards for a score. The Cardinals converted the two point conversion to make the score 14-0 BC.

The got on the board early in the second quarter with a Rashand Jones touchdown pass to Jacoby Smith that went for 55 yards. The Bulldogs failed to convert the PAT making it 14-6 BC.

Jones passed for 129 yards and two scores and rushed for 62 yards on the night.

On the back of the many running backs incorporated in the Cards’ split T offense, Baker capped off a long drive with a five-yard touchdown run. Alfredo Heraldez made the extra-point for a 21-6 Bridge City advantage.

The Cardinals continued to find success on the ground with quarterback Byron Trahan having a long 30-yard run and Baker capped off another nice march by zipping into the end zone from 34 yards out to make it 28-6.

Bridge City’s defense was a force to be reckoned with, and continued to hold the Bulldogs to minimal gains. Trahan was able to show off his arm with a 33-yard touchdown pass to wide receiver Seth Martin to give the Cardinals a 35-6 edge.

The second half started as the first half ended, with BC running for mass amounts of yards. Baker took off for a 70-yard touchdown romp to increase the lead to 42-6.

North Forest strung together a long 73-yard drive with Jones picking up most of the yards and he ended the drive with a touchdown pass to Aleric Mendez that went for 12 yards. The two-point conversion was no good, to make the score 42-12 BC in the third quarter.

The Cardinals answered quickly on the next drive with freshman Andy Lara scoring from 71 yards out as he tore through the Bulldogs’ secondary to up the BC cushion to 49-12.

The Cardinals next drive features Lara again, this time the youngster bolted into the end zone from 19 yards out for the touchdown and the final tally of the night.

Bridge City will welcome in the West Orange-Stark Mustangs (2-0) to Ward Stadium next week in a game that should have a tremendous atmosphere.

By Ronnie Hughes Leader Correspondent KIRBYVILLE — The Orangefield Bobcats rolled into Kirbyville Wildcat Stadium with a chip on their... read more