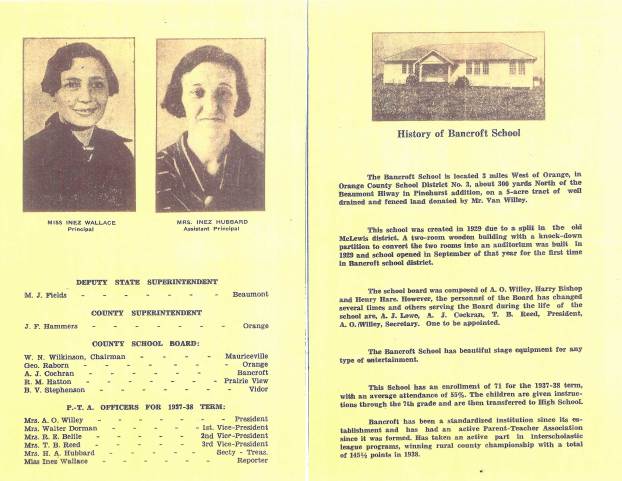 The Bancroft School opened in 1929 on Old Bancroft Road following a split of the old McLewis School district. The school property was within the old Pinehurst Heights area.

The original building was composed of two rooms separated by a knockdown partition, which allowed for conversion to an auditorium when needed. The East end of the building was a beautiful stage and the school had equipment for any type of entertainment.

The school operated at the location for seventy-four years. Today the building is the home of Family Worship Center, a local church body.

Van Willey donated the five-acre tract of well-drained and fenced land where the school was constructed. Willey was one of the early settlers of Pinehurst. He and his brother moved here from Illinois around 1890 when they were approximately 20 years old. Willey purchased several acres of land near what is now the location of the Brown Estate of Lamar State College-Orange.

The school had an enrollment of 71 for the 1937-1938 school term. The average attendance during the school year was fifty-five percent. Children received instruction through grade seven when they transferred to high school.

During the Depression students only attended school for half a day. Cecil Willey, grandson of land donor, Van Willey, attended the school during that time. He rode his bicycle at noon each day after school to a local filling station where he worked until midnight. Some nights Cecil would sleep at the filling station before returning to school the next morning.

Cecil and his brother A.O. were hired to paint the school building. After applying a fresh coat of white the paint the boys had to watch as a swarm of ‘love bugs’ stuck to the wet paint. The boys were forced to scrape the bugs from the building before repainting.

The school was expanded in 1942 when a third room was added on the east end of the building. Outdoor restrooms, one for boys and another for girls, were also constructed. Teachers were treated to a shed or carport at the north entrance to allow a place to park their cars.

After the war ended in 1945 classrooms were added for first through third grades and the school hired three new teachers.

Students went on strike in April 1948. The following school year, 1948-1949, a shortage of teachers required transferring students beyond sixth grade to Carr Junior High. The following school year the first brick structures opened on campus, an annex and cafeteria. A full staff of teachers the same year allowed acceptance of students through eighth grade to receive their academic training.

By Dawn Burleigh Dawn.burleigh@orangeleader.com   PINEHURST — An annual tradition is adding a twist this year. The 17th Annual Senior... read more