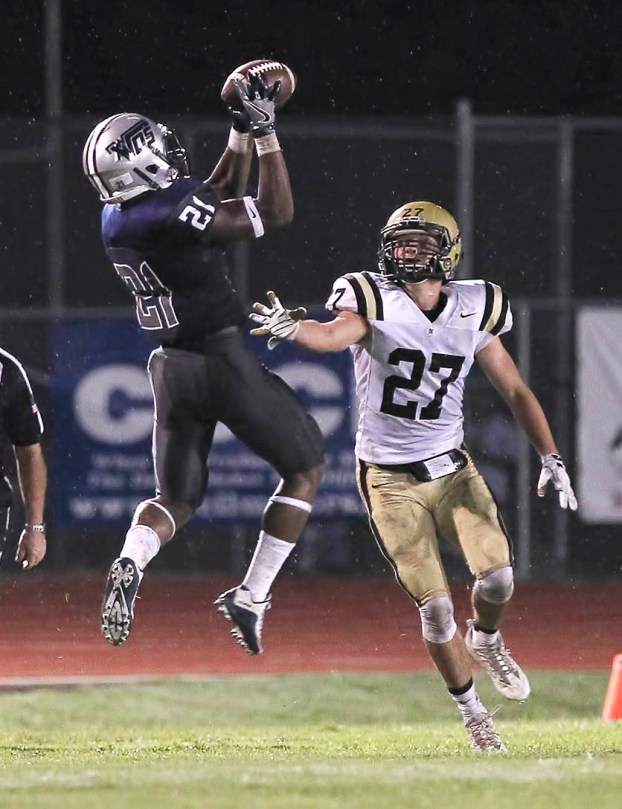 WEST ORANGE – Picking up where they left off last year, the defending Class 4A Division II state champion West Orange-Stark Mustangs made quick work of the Nederland Bulldogs Friday night in the season opener at Hooks Stadium.

Utilizing all three phases of the game well, the Mustangs cruised past the Bulldogs 42-0.

The Bulldogs (0-1), who have won or shared the last five district titles in 22-5A, struggled mightily throughout the night on the slick field.

The Mustang Chain Gang defense limited the Bulldogs to just 81 total yards. Nederland had 28 carries for a minus 12 yards.

“We came out and executed really well for the first game and all,” said Mustang coach Cornel Thompson. “The kids were focused and you gotta love that. We beat a quality opponent tonight and we can build on this one. Nederland will bounce back. Coach (Larry) Neumann and his staff will get them going, they’re a young team.”

The Mustangs finished with 368 yards despite a “muddy track.”

WO-S quarterback Jack Dallas completed 10-of-18 passes for an efficient 157 yards and sat down midway through the third period.

Senior tailback Jeremiah Shaw finished with 70 yards and three touchdowns on nine carries. Fellow back Kavyn Cooper had 53 yards on 10 totes while Keion Hancock had five receptions for 78 yards and Shaw had three receptions for 45 yards.

“We moved the ball well, especially on those early drives,” said Thompson. “Of course, we would like to cut down on our penalties, which you kind of expect in that first game. There is always things to work on, but we’re very pleased with the effort tonight.”

Nederland quarterback Marshall Lange was scrambling for his life most of the night but managed to complete 14-of-27 passes for 93 yards but was picked off twice.

Reid Garrett led the Bulldogs with four catches for 40 yards while back Devin Simmons had 17 carries for 39 yards.

“They (Nederland) just couldn’t get anything going,” said Thompson. “We had that big interception return by Justin (Brown) there in the first quarter and that really got things going for us.”

WO-S (1-0) totally picked apart the Bulldogs in the first half in all three portions of the game to erupt to a comfortable 28-0 cushion at intermission.

The Mustangs outgained the Bulldogs 225-29 in the first 24 minutes and Shaw tallied three touchdown runs.

WO-S’ defense limited Nederland to just 29 yards in the half and two first downs.

The Mustangs made it look easy on the first series of the game as they chewed up 53 yards in just four plays to hit paydirt.

Dallas completed two passes for 41 yards, including a beautifully timed 33-yard strike down the right sideline to Keion Hancock that went to the Bulldog 2.

Jeremiah Shaw, who had two carries for 17 yards on the series, scored from two yards out up the middle. Freshman Paulino Santos booted his first extra-point on the varsity as the Mustangs snared a 7-0 lead with 10:16 left in the first quarter.

WO-S drove from its own 33 to the Bulldog 14 on their next series but Nederland stopped the Mustangs on a fourth-and-5 as Dallas was rushed heavily and threw an incomplete.

The Mustangs bounced back nicely when standout linebacker Justin Brown stepped in front of a Lange pass and took it 18 yards for the score.

Dallas promptly bolted in with a sneak for the two-point conversion to give the Mustangs a 15-0 edge with 2:31 in the first.

A KJ Miller 38-yard punt return through the heart of the Bulldog special teams enabled the Mustangs to set up shop at the Nederland 24 with 8:43 in the half.

Dallas hooked up with a Hancock again, this time on a nice pass to the left side. Hancock faked out a Bulldog and bolted to the Bulldog 5.

On the next play, Shaw picked up his second score of the night, ripping off a five-yard touchdown jaunt off left tackle. Chad Dallas then booted his first varsity extra-point to give WO-S a 22-0 edge with 8:05 in the half.

After a 31-yard punt return by Miller, the Mustangs took over at the Nederland 38 and scored six plays later.

Shaw ripped had a eight-yard dart and later completed the march when a sharply designed draw play netted 10 yards and a touchdown as he found the end zone for the third time, upping the margin to 28-0 with 1:31 in the half.

Shaw darted for 59 yards on seven carries in the half and hauled in three passes for 45 yards. Hancock had four receptions for 82 yards.

Meanwhile, Lange completed 7-of-12 passes for the Bulldogs for just 31 yards. The Bulldogs had 12 rushes for a minus two yards.

It got worse for the Bulldogs to open the second half.

After an errant punt snap by the Bulldogs’ special teams set up the Mustangs at the Nederland 23 with 9:49 in the third.

The Mustangs hit paydirt five plays later when sophomore back Kavyn Cooper, who had three carries for 19 yards on the series, scored on a nice six-yard counter run up the middle to pugh the gap to 35-0 with 8:10 in the third.

Mustang defensive back Malick Phillips picked off a Lange pass at the Bulldog 48 and returned it to the 30 with 6:41 in the third but the Bulldogs held.

Nederland wasn’t as lucky on the next Mustang series as WO-S sophomore quarterback Chaka Watson took a keep around the right end and sprinted 69 yards down the right sideline for a touchdown, making it 42-0 with 2:53 in the third.

The Mustangs will visit Little Cypress-Mauriceville next week in a battle for The Orange Bowl Trophy.