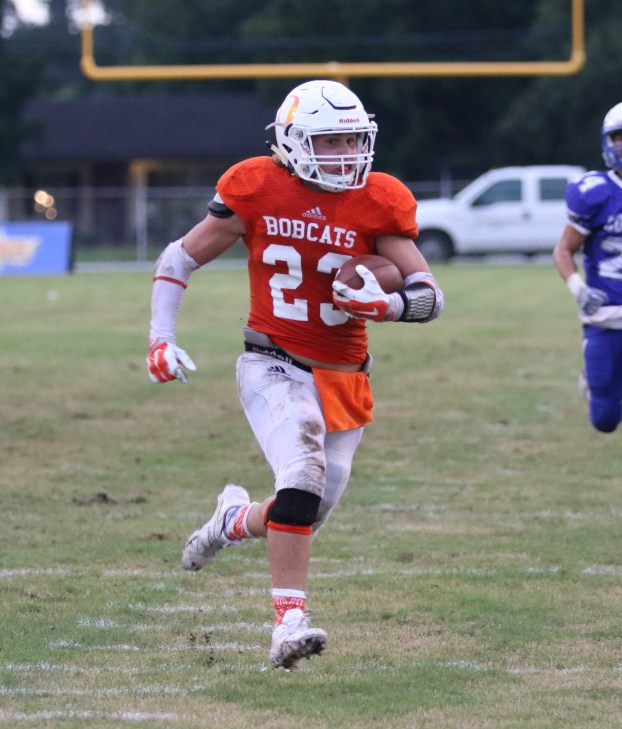 ORANGEFIELD — The Texas high school football season is in full swing and the Orangefield Bobcats looked in mid-season form on both sides of the ball Friday night.

Christopher McGee galloped for 69 yards and two touchdowns as the Bobcats shut out the Buna Cougars 45-0.

The Cats’ piled on 303 yards of total offense while the defense had four takeaways.

Buna won the coin flip and elected to receive the ball to open the game. The Jacob Rainey kickoff slipped right through the hands of Buna kick returner Trent Nugent, for the first Bobcat takeaway of the night. The Cats’ needed just two plays to notch a touchdown to take an early 7-0 lead. Following a short gain up the middle by Hunter Evans, tailback Wesley Frillou found room off the right side to scamper in for a 32-yard score.

The Cougars offense sputtered early and often against an experienced Bobcat defense that features three senior linebackers and found themselves in a three-and-out situation on their first possession of the game and was forced to punt. The Cats’ took advantage of excellent field position at midfield as they used six plays to work their way inside the 30 to set up a Jacob Rainey field goal attempt. Rainey made it look easy as he split the upright from 42 yards out to give the Bobcats a 10-0 advantage with just under six minutes left in the first quarter.

Following another Buna punt, Orangefield took control of the ball at the Cougar 46. Christopher McGee notched his first score of the night on the seventh play of the drive with a 25-yard run off the left side. Orangefield led 17-0 after one quarter of play while holding Buna to one first down and 18 yards of offense.

A hungry Bobcat defense didn’t take long to force the second fumble of the game for Buna. Just seconds into the second quarter Andrew Hoyland hopped on a loose ball to give the Cats’ the ball at the Cougar 29. Frillou had two runs for 23 yards on the drive to put the Cats’ inside the 10. McGee again found running room and bounced in from six yards out to further the lead to 24-0. Frillou notched 62 yards rushing on the night with Hunter Evans contributing 41 yards.

The Cougar offense was able to put together a positive drive their next time out. They’d get eight plays in for 40 yards before penalties plagued the drive. On third down and 13 the Cougars would go for it and quarterback Alex Conel found no room and turned the ball over on downs. The Bobcats had one last shot to extend the lead before the half with another Rainey field goal, but would shank the kick from 40 yards away leaving the score 24-0 at the half.

The Bobcats offense churned in 151 yards in the first half and held the Cougars to 56 yards.

Orangefield opened the second half of play with a quick three-and-out series. The Cougars however, picked up where they left off; unable to hold onto the ball. The first play of the half Conel fumbled the snap and Mason Gonzales scooped it up for the Bobcats. The fumble recovery gave the Cats’ excellent field position again in Cougar territory. It took just three plays for the Cats’ to find the end-zone. Two big gains by Louvier led to a Caleb Kress quarterback keeper for a 34-yard touchdown and a 31-0 Bobcat lead.

Buna was never able to recover from early turnovers and penalties. The young Cougar team again coughed up the ball on their next possession with Colton Harrington jumping on it for Orangefield at the Cougar 41. Mason Gonzales replaced Kress at the quarterback position for the Cats’ with the game out of reach for the Cougars.

Gonzales quickly worked the Cats into scoring position. Louvier would bobble a pitch from Gonzales, but was able to gain control of it and rumble in for an eight -yard touchdown. The Bobcats led 38-0 with eight minutes still to play in the game.

Despite the big lead, the best Orangefield possession came late in the fourth quarter. Gonzales seemed poised and in control of the offense with some of the second teamers in the game. He led his guys on a 75-yard, 15-play drive and capped it off with a quarterback keeper from one yard out to seal the game at 45-0. Kelly Tiller and Dylan Williams combined for 45 yards on the drive taking over duties in the backfield.

The Bobcats held the Cougars to 89 yards of offense while forcing five fumbles in the shutout. The Cats’ will take the big week one win and use that as momentum as they’ll get tested from the state-ranked Kirbyville Wildcats, next Friday in Kirbyville at 7:30pm.