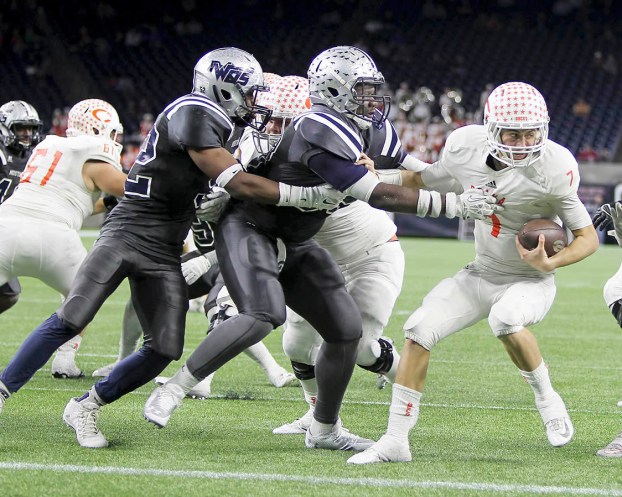 WEST ORANGE — Looking to defend their Class 4A Division II state crown, the West Orange-Stark Mustangs know they have a lot of work ahead of them to get to that level again.

It seems like the Mustangs are still fresh off their 22-3 state title win over Celina.

However, they don’t want to rest on their laurels. They tend not to do that in Mustang Country.

WO-S will be seeking its third straight trip to the 4A Division II State Championship Game. The Mustangs have advanced to at least the 4A Region III Division II Regional Finals in head coach Cornel Thompson’s five-year stint in which they have gone 62-11.

“We’ve had a pretty good run and last year we reached the pinnacle, which was so great for the kids, coaches and community as a whole,” said Thompson. “Now, it’s a new year. The slate is wiped clean and the only thing we should be worried about is Nederland come Aug. 26.”

The boys in blue and silver will once again have to navigate through a treacherous non-district schedule and get past their District 12-4A Division II opponents before they taste the postseason and that is what Thompson and a superb coaching staff cares about first and foremost.

“We’ve got Nederland and all them Bulldogs and Coach (Larry) Neumann do nearly every year is win their league,” said Thompson. “We’ve got back-to-back road trips against LC-M, who always plays us tough, especially at their place and then we visit Bridge City, which it was great to renew that rivalry again. The Cardinals have a bunch of key folks back and they will be raring to go at their place. We’ve got a private school in Houston Kipp that we don’t know about. One thing for sure, we know all about Silsbee that fifth week and what they bring and then we get to face a 4A Division I semifinalist in Kennedale in Nacogdoches. Hopefully we can navigate through all of that without suffering any significant injuries. That’s what we worry about, especially having to play six non-district games this year.”

After zipping to the state title tilt in 2014 in which they fell to Gilmer, the Mustangs were not expected to go back to the big game last year with just one offensive starter and four defensive starters returning.

But they rose up and canned almost every team they faced in going 15-1.

This time they have been predicted to go far, after all, 17 starters, eight on offense and nine on defense, return to the mix.

“In 1988, after winning two state titles in a row, we had a lot of kids come back but they got a little complacent at times, thinking they deserved it, instead of earning it,” said Thompson. “That was a darn good football team too. We tell the kids all the time that rankings and what you hear out on the streets don’t mean nothing in August. It’s all about three phases. You first try to get through non-district, then there is district, then there is the playoffs. It does not go in reverse order. It may be old coach-speak, but it’s all about one game at a time.”

The Mustangs averaged 394 yards a game last season, despite “calling off the dogs” late in a slew of blowout victories in 2015.

Back to lead the offensive fireworks show is senior quarterback Jack Dallas.

Dallas owns nearly every passing mark in WO-S history. Last season he completed 209-of-321 passes for 3,113 yards to go along with 38 touchdowns and just seven interceptions. The last two seasons he has converted 377-of-612 passes for 5,466 yards with 69 TDs and just 15 picks.

“Not many teams are fortunate enough to have a quarterback that has started 32 games and Jack is one of those rare natural born leaders,” said Thompson. “He’s always done what has been asked of him and he has always known that he is just 1/11th of the team when he is out there. He loves being around his teammates and has always acted like just one of the guys.”

Dallas has some “burners” back to get the leather to as well.

Running back Jeremiah Shaw returns after ripping off 960 yards and 13 TDs on just 140 carries.

Receiver KJ Miller is back after hauling in 36 receptions for 660 yards and nine TDs, averaging nearly 19 yards a reception.

Keion Hancock is dangerous as well. After missing several games last year due to an injury, Hancock will try to make a big impact. Last season he caught 35 passes for 503 yards and two TDs and rushed for 323 yards and eight TDs on just 41 attempts.

“We have some experience at our skill positions,” said Thompson. “Shaw should get a bigger workload this year after sharing a lot of time last year. KJ Miller, what more can you say about that one, he does everything for us whether it’s catching the ball, bringing back kickoffs and punts and holding on kicks. Hancock is also very versatile and we can utilize him several different ways. We’ve got a few more kids that are going to step in and play big roles. We like our depth.”

The Mustangs return plenty of talent up front to pave the way, including center Ryan Ragsdale and tackles Morris Joseph and Te’Ron Brown.

“That’s a pretty good group that has settled in there and came on strong for us last year,” said Thompson. “We’re looking for some new guards and we’ve got four or five kids that we’re looking at pretty hard.”

The cupboard is certainly not bare on the defensive side of the ball either from a unit that gave up just 201.2 yards per game.

Linebacker Justin Brown is back after he shredded opposing offense for 192 tackles.

The Mustangs are loaded up front as well with the return of linemen Mandel Turner-King, who had 90 tackles, 18 of them for losses and Jalon Powdrill, who made 152 stops. Defensive ends Keyshawn Holman and Ronald Carter bring back some pop as well up front.

“Our strength on defense will definitely be up front, where everyone is back,” said Thompson. “Those kids are tough as nails, fly to ball and just get after it. They’re physical and quick and that’s what we want in our defense.”

Cornerback Malik Phillips is a tremendous anchor in the secondary after making 86 tackles and picking off three passes. Cornerback Jarron Morris returns as well after having a superb run last year, especially in the postseason. Safety Demorris Thibodeaux should make an impact as well.

“Brown is definitely one of those bell cows at linebacker and Phillips and Morris really anchor down the secondary,” said Thompson. “We’re kinda looking at another linebacker to step up and possibly corner or safety that will make an impact. That’s what those early games are all about.”

One thing for certain, Orangefield, Liberty, Hamshire-Fannett and Hardin-Jefferson will try to spoil a seventh straight Mustang district crown.

“I tell you, our district will be much-improved over last year so I hope we are too,” said Thompson. “We’ve got Liberty and Orangefield in those last two weeks and both them, we know, have a lot of young talent back that got good experience last year by making the playoffs. Right now though, it’s all about preparing for district and hopefully non-district will have us ready to roll when Hamshire-Fannett rolls in here in October.”

Experienced Cards in 10-4A title quest

BRIDGE CITY — After a two-year absence from postseason play, the Bridge City Cardinals bolted into the playoffs in 2015... read more