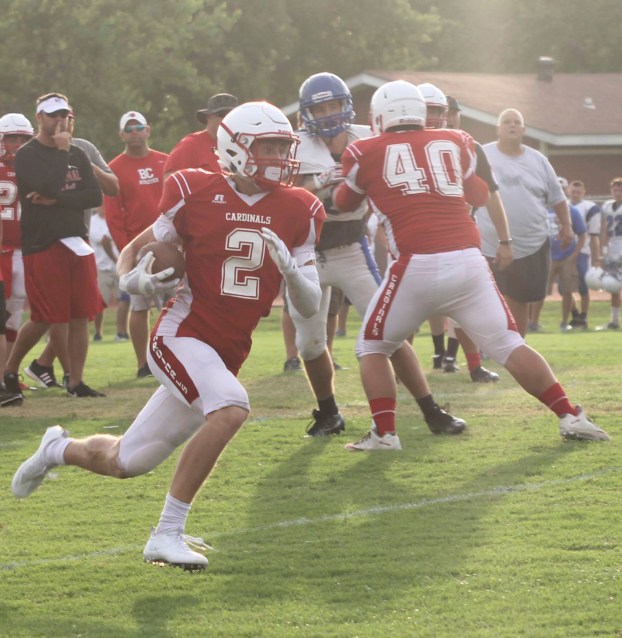 Experienced Cards in 10-4A title quest

BRIDGE CITY — After a two-year absence from postseason play, the Bridge City Cardinals bolted into the playoffs in 2015 and competed hard for the District 10-4A Division I crown under the guidance of first-year head coach Dwayne Dubois.

The Cardinals found some momentum early last season with young talent showing plenty of maturity along the way as they flew under the radar, but big non-district wins over both ranked 3A teams Kirbyville and Newton put them on the map.

Teams will know who the Cardinals are this season as Coach Dubois and Co. welcome back seven starters on both sides of the ball from last year’s 7-4 unit.

The Cardinals should definitely be in the hunt for the 10-4A Division I title this year and will look to erase an 11-year playoff win drought.

The Cardinals have been in the playoffs five times since 2005 but have fallen in the bidistrict round. Bridge City’s last playoff victory was a 23-0 area round win over Jasper in 2005.

“We feel like we have a chance to be an excellent football team,” said DuBois. “We have a tremendous senior class that has shown a lot of leadership way back in the offseason. We love the experience that is returning. Last year it was all about learning a new offense and a new defense. Going into this year, they mostly know what it’s all about.”

Bridge City will be in a revamped 10-4A Division I. They will still face the likes of defending 10-4A champion Silsbee, Little Cypress-Mauriceville, Huffman and Cleveland. Gone are Jasper and Splendora.

However, a new menace enters the picture in the form of the Navasota Rattlers. The Rattlers were state champions in 2012 and 2014 and return several key players off last year’s 12-1 regional semifinalist squad.

“Navasota, year-in and year-out, makes deep playoff runs and have been in the hunt for the state title,” said DuBois. “Silsbee is Silsbee, they have so much talent. Navasota and Silsbee both have new head coaches but you now the talent is there and those guys just kinda reload, even though they will be playing in a new system. LC-M has a whole lot of talent coming back and Coach (Randy) Crouch does a great job with them. Huffman returns more starters than anyone else in the district and will be formidable. Cleveland has some tremendous athletes as well.”

No nights in 10-4A Division I will be a walk in the park.

“In this district, you just can’t expect to show up anywhere and win a game,” said DuBois. You better be ready to bring your ‘A’ game every single time because there is a lot of talent across the board that you will be facing.”

Jack-of-all-trades Byron Trahan should see the majority of snaps at quarterback and is also a returning Second Team All-District linebacker. Trahan started at quarterback as a sophomore in a ‘spread’ system before injuring his knee and missed about half that season.

“Byron (Trahan) is really starting to pick up the offense well in practice,” said DuBois. “He’s a good athlete. He’s got a good arm and can run.”

Fullback Cayce Draper returns to the mix after zipping for 1,282 yards and 14 touchdowns in the Cardinals’ vaunted Slot-T offense.

“Draper is one of those hard-nosed runners that is built low to the ground,” said DuBois. “He’s hard to wrap up and even though he is small in stature, he’s not afraid to lower the boom on the defense. He knows what our system is about, being in it for three years now.”

Where the Redbirds could do some serious damage to opponents is up front as five seniors return to open up holes including Second Team All-District tackle Joseph Adams , Chase Boneau, Alex Lara and Zayne Trahan along with center Nick Menard.

“We’re talking about five three-year starters pretty much right there and they’re the strength of our team,” said DuBois. “Adams, Trahan and Menard are nice anchors up there and they’ve gotten so dang strong in the offseason. We’re probably moving Boneau to tight end, he could be a beast there and we’re moving Lara from guard to end.”

Keegan Johnson and Trace Moore will also see plenty of time in the offensive trenches as well.

Keegan Landry and Tristan Arnold will look to haul in balls when the Cardinals throw it. Max Baker will look to get some key totes out of the backfield along with Patrick Morris and Hunter Denton.

“We like what we have at the skill positions,” said DuBois. “With Denton, you have 4.4 speed back there. Baker, we’re excited about him because he’s so shifty. Morris helps us tremendously on both sides of the ball. We like our depth.”

The Cardinals will look to show a lot of improvement on defense in what was a very high-scoring 10-4A Division I last year.

“We know we need to show improvement on defense,” said DuBois. “We’ve got a lot of key kids back and we’ve got some kids coming up that we think can make a big impact.”

In the trenches will be the likes of Seth Green and Stetson Wilson, who gained valuable experience last season along with Zeke Mendez. Adams, Lara and Johnson will also rotate in and out a lot on the defensive front as well.

The secondary has plenty of speed with the likes of track champion Denton, Zach Honeycutt, Justyn Romero and Caleb Honeycutt.

Blake Dichiara and Ethan Hamm will also get a lot of time at linebacker after having solid seasons on the JV unit along with Seth Martin and Tyler Tran.

The Cardinals will certainly be prepared for a rugged 10-4A as their non-district schedule includes the likes of four 2015 playoff teams in Hamshire-Fannett, Houston North Forest, West Orange-Stark and Newton. Those teams went a combined 41-12 a season ago.

The Cardinals will just have a nine-game schedule due to Class 3A Division I state champion Brock pulling out of a game with the Cardinals late in the summer as BC will have back-to-back open weeks Sept. 23 and 30.

“It is what it is with Brock, which was something that was totally out of our control but we will battle through it,” said DuBois. “We’ve still got four playoff teams in non-district to deal with. Hamshire will be a good opener. North Forest is a great second opponent. They’re a good HISD school which defeated Brenham and went 10-2 last year. Then there is WO-S, defending state champion with nearly everyone back. They have tremendous athletes across the board and are so well-coached with Coach (Cornel) Thompson and his staff over there. Ditto for Coach (WT) Johnston and those Newton Eagles. We’ll stack up our schedule with anyone. A schedule like that only gets you ready for a district like we’re in.”

Bobcats ready to make noise in 12-4A

ORANGEFIELD — It took a decade for the Orangefield Bobcats to end a long playoff drought. Now, the boys in... read more