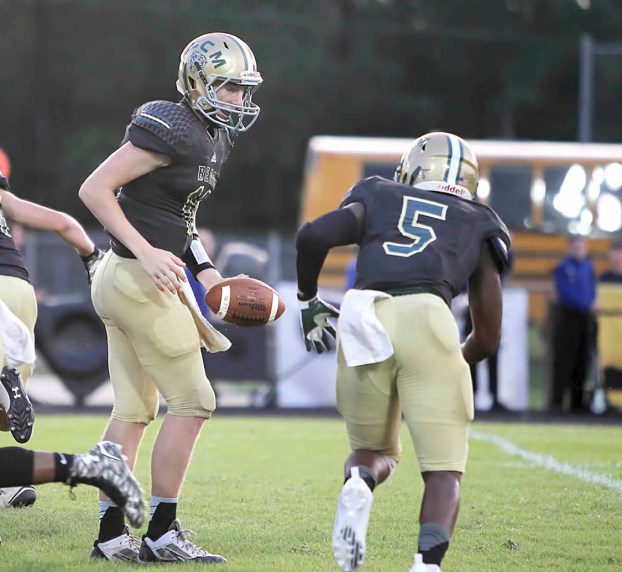 LITTLE CYPRESS — They will be looking show some vast improvement in Battlin’ Bear Country this season.

A play here and a play there basically kept the Little Cypress-Mauriceville Bears out of the playoffs last season as they went 3-7 overall and 2-4 in District 10-4A Division action.

It ended the Bears’ playoff streak at two years in a row after the program had went 16 years without postseason action.

“We were in some tough games last year where they could’ve went either way,” said LC-M coach Randy Crouch. “We had too many turnovers last year and we gave up too many big plays, yet we were pretty much right there every game and the kids realize that. They’ve come out and have worked hard and are hungry to go out there and be successful. Every week, there’s a tough challenge for us and they’re really looking forward to it.”

The Bears will look to growl their way into the playoffs this year in what should be a rugged 10-4A district and will be seeking their first postseason win since 1997.

Crouch will be entering his eighth season at the helm this year and welcomes back talent on both sides of the ball with 17 letter winners returning including five starters on offense and four on defense.

The Bears bring back plenty of experience in the backfield in the forms of fullback J’Lon Douglas, tailback Chris Winters and quarterback Beau Bickham.

Douglas bruised his way to almost 1,000 yards and seven touchdowns while Winters scooted for 645 yards and nine TDs. Kayne Williams is expected to add some juice to the backfield as well. Bickham seems fully recovered after suffering a leg injury that kept him out of district games down the stretch.

“We’ve got a good group back there,” said Crouch. “Douglas runs so dang hard and Winters has the big-play capability. Williams gives us an added dimension. It’s great to have Bickham back in full form and he’s really looked good in the early going. The thing is, we’ve got to keep those backfield guys fresh because they will play some defense too, so hopefully some of our younger kids can step in there as well.”

The Bears have a couple leaders up front in senior offensive linemen Jim Jones, who made all-district, along with Luis Zuniga and Truman Franklin. Jones will move from guard to tackle. Zuniga will likely move from guard to center. Crouch and staff have also bee impressed with Parker Linscomb and Zack Robin.

The receivers will be paced by Trey Guillory, who was a standout in the secondary but will look to play more on offense this season.

Jones and Franklin bring back experience in the defensive trenches while all-district defensive back Guillory returns in the secondary along with Winters.

“Our biggest thing right now is looking to improve along the defensive front,” said Crouch. “We don’t want to have to play kids both ways, so we’re looking for some new faces to step up for us. Our linebacker group, we think, will be pretty good and we have Guillory and Winters leading the secondary.”

The Bears are picked to be barely on the outside, looking in by most magazines and polls entering this year’s fray in 10-4A.

The 10-4A race will definitely be one that should last the long haul all the way to the final week and the Bears will look to be in the heat of it.

State power Navasota will join the 10-4A mix. The Rattlers captured state titles in 2012 and 2014 and are certainly the favorites to take the district.

The Bears will also be dealing with Silsbee, a Region III Finalist last year, along with a very experienced Bridge City team that experienced the playoffs, along with Huffman, a playoff team that returns 17 starters.

“Navasota, what more can you say, is a state power what seems like every year,” said Crouch. “Silsbee and Bridge City are both loaded with so many key people back and Huffman, they’re always strong. There will be no nights off in our league, you’ve got to bring your best shot each and every time. I think it’s one of the toughest districts in the state for sure.”

The Bears will face Silsbee (Oct. 7) on the road and will have to make the two long road trips to Huffman (Oct. 21) and Navasota (Nov. 4).

If the Bears want to punch in a playoff ticket they will have to be “warriors” on the road.

The Bears will be going in as a “sleeper” as they will look to relish the underdog role to spur them on.

“We’ve got perhaps the toughest non-district schedule we’ve had here in awhile,” said Crouch. “Every team made the playoffs last year except Hardin-Jefferson. Jasper on the road to open up is tough. West Orange, those guys are poised to make another long run. H-J has a lot of good folks back. Orangefield will be a tough test for sure and St. Pius, we will be facing one of the best quarterbacks in the state. It will certainly get us ready for lies ahead in district play.”