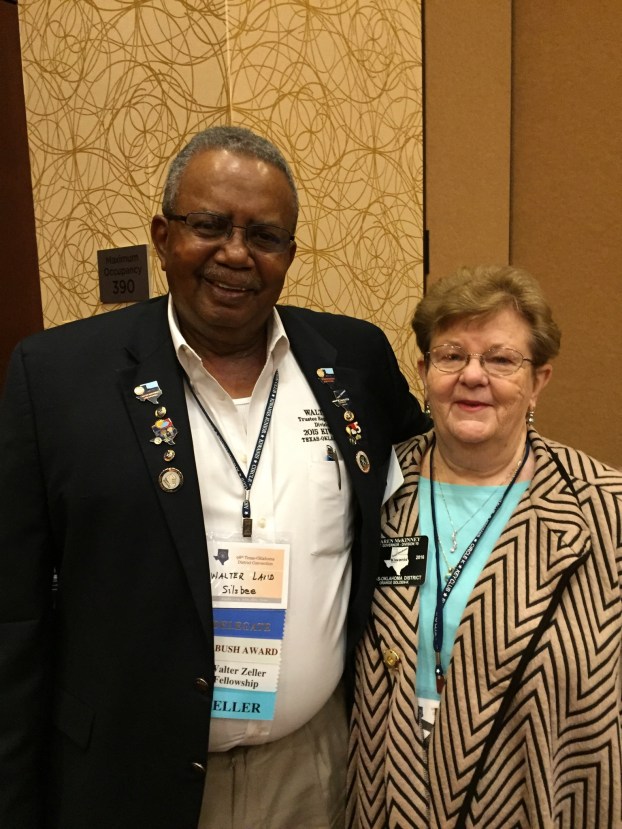 Courtesy photo Walter Land, trustee, and Karen McKinney, district 10 Lt. Governor, at the recent 98th Convention of the Texas/Oklahoma of the International Kiwanians.

Allen, Texas was the site of the 98th Convention of the 2016 Texas/Oklahoma International Kiwanis Club. This five day gathering met at the Marriot Courtyard Hotel in Allen.

Members from Texas and Oklahoma were presented with an array of forums to teach and support the organization.

The meetings were described in I-Plan Categories. These included Inspiration, Impact, Image, and Investment. Seasoned members were given a new look at just how to accomplish progress. Newer members were able to learn the breath that this organization has reached and were inspired to carry on in their own community.

One particular speech was about the Project Elimination, which aims to eradicate Tetanus in mothers and children in several countries in Africa. Victoria Peterson Elia heads this and gave a rousing speech, giving us a tally of the success accomplished and the remaining goals to be met.

The convention was well attended with over 300 Kiwanis members present. The group left with positive ideas and intentions o further the care and development of the children of the world.

Orange has two Kiwanis Clubs currently. The Golden K Kiwanis’ members are generally over 60 and meet for breakfast with a speaker on Wednesdays at the Sunset Grove Country Club. The Orange Kiwanis Club is made up of working persons who meet for lunch on Thursdays, also at the Club.