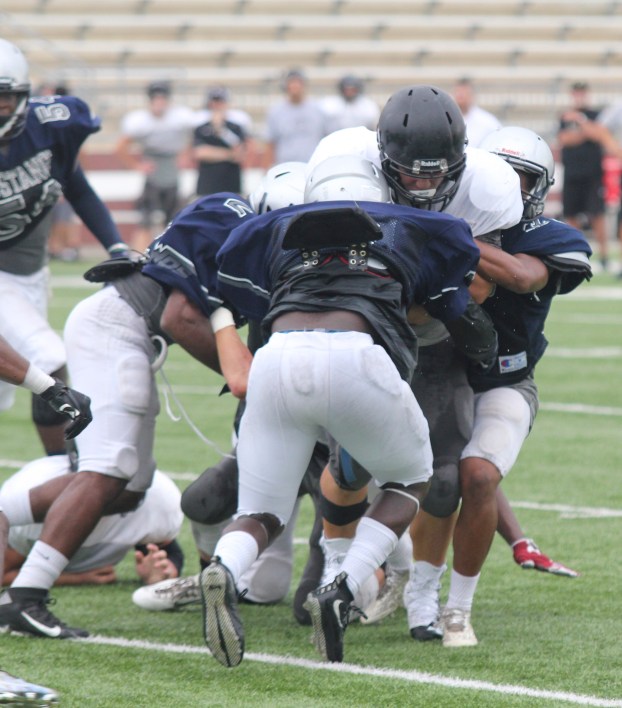 Leader Photo by Van Wade WO_S defenders collide with a Vidor running back at Thursday's scrimmage.

Orange County football teams and coaches went through their final scrimmages Thursday as they prepared to play for “real” when the regular season kicks off under the Friday night lights this week.

The West Orange-Stark Mustangs took on the Vidor Pirates at “The Butch” in Beaumont Thursday.

The Mustangs walked away with a 35-19 victory in what was an excellent practice that had plenty of contact as usual when those two squads meet.

After a Vidor turnover, the Mustangs got on the board first when KJ Miller took a handoff and swept to the left for an eight-yard touchdown.

The Pirates struck back quickly when Maverick Quirante broke loos up the gut of the Mustang defense and cruised 70 yards for a touchdown.

The Mustangs went up 14-7 late in the first quarter when Miller hauled in a screen from quarterback Jack Dallas and cut up the field for a 55-yard touchdown.

The Mustangs made it 21-7 to close the first half when Dallas and Miller hooked up again, this time on a 17-yard touchdown pass that Miller snared in the left back corner of the end zone.

WO-S went up 28-7 early in the third when quarterback Chaka Watson teamed up with Jay’lin Mathews on a 61-yard bomb down the left sideline.

Mustang tailback Kavyn Cooper upped it to 35-7 with a four-yard touchdown jaunt.

The Pirates added a pair of scores late in the fourth quarter as players from both squads saw plenty of action.

The Mustangs will be on a quest to make the Class 4A Division I State Championship for the third straight year.

The Mustangs will open up the season at home against Nederland. They will not open up defense of their District 12-4A Division II crown until Oct. 7 when Hamshire-Fannett rolls into Hooks Stadium.

Vidor will look to make the playoffs in a revamped District 22-5A after going 3-7 last season.

The Pirates will still compete against the likes of Nederland, Port Neches-Groves, Beaumont Central, Beaumont Ozen, Lumberton and Baytown Lee but Port Arthur Memorial and Livingston will be added to the mix this time around in what will be an eight-game 22-5A schedule.

Coach Jeff Mathews will certainly welcome back some experience as nine Pirate starters return on offense and eight on defense.

The Pirates will crank up their season Aug. 26 when they play host to the Barbers Hill Eagles. The 22-5A season will come early as Vidor will venture to Beaumont to face Central Sept. 10.

Over at Newton Thursday, the Little Cypress-Mauriceville Bears held their own against 3A state power Newton.

The Eagles scored a pair of touchdowns while the Bears had one as both defenses stood tall throughout.

The Battlin’ Bears will look to improve on last year’s 3-7 finish.

LC-M will kick off its 2016 campaign on the road Friday against former 10-4A foe Jasper.

Over in Kirbyville, the Bridge City Cardinals and the Wildcats got a scrimmage done in sloppy conditions.

In the controlled portion, the Wildcats scored a pair of touchdowns while the Cardinals had one. In the game-like situation, the Cardinals won 10-7 as turnovers proved costly for both squads in the conditions.

Making a long trip to Splendora Thursday, the Orangefield Bobcats took on the Wildcats in a tight battle.

Both squads scored two TDs apiece in the controlled session and then tied 7-7 in the game-type situation.

The Bobcats will be seeking their fourth straight playoff berth and Coach Josh Smalley welcomes back seven starters on offense and six on defense from last season’s 5-6 playoff unit.