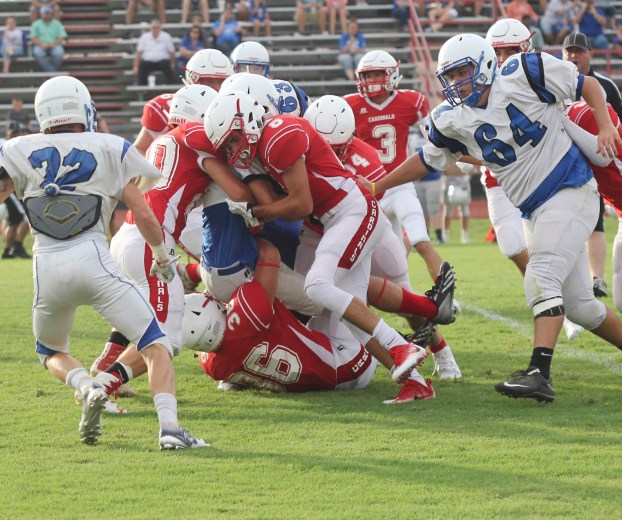 Leader Photo by Caleb Adams The Bridge City defense makes a big stop against Buna in a scrimmage last week.

High school football teams will get their final tuneups in scrimmages Thursday before the real deal cranks up Aug. 26.

Over at West Orange-Stark, the Mustangs controlled their scrimmage at The Reservation last week against Port Neches-Groves.

The Mustangs built a 19-0 lead at the half and went on to take the practice affair 19-7.

The Mustangs will play host to the Vidor Pirates for a 7 p.m. scrimmage at Hooks Stadium Thursday.

WO-S will be on a quest to make the Class 4A Division I State Championship for the third straight years and will look to repeat as state champion.

WO-S will open up the season at home against Nederland. They will not open up defense of their District 12-4A Division II crown until Oct. 7 when Hamshire-Fannett rolls into Hooks Stadium.

Over at Bridge City, the Cardinals battled Beaumont Kelly and Buna in a tri-scrimmage affair last Friday and the Redbirds dominated both of their counterparts in what was mostly a controlled scrimmage.

The Cardinals will travel to Kirbyville for a scrimmage Thursday.

The Bears scrimmaged at Coldspring Friday in what was a tough battle for both teams.

The Bears will visit Newton Thursday.

The first 10-4A game will be Oct. 7 when they make a trip to Silsbee to face the Tigers.

Orangefield tangled with Shepherd in their first scrimmage Friday and scored a touchdown and a field goal and held Shepherd scoreless in the controlled scrimmage.

Both defenses played well. The Bobcats got a touchdown when the two first team units played. Neither team scored when the second teams saw action.

The Bobcats will travel to Splendora in a scrimmage Thursday with the varsity starting around 6:30 p.m.