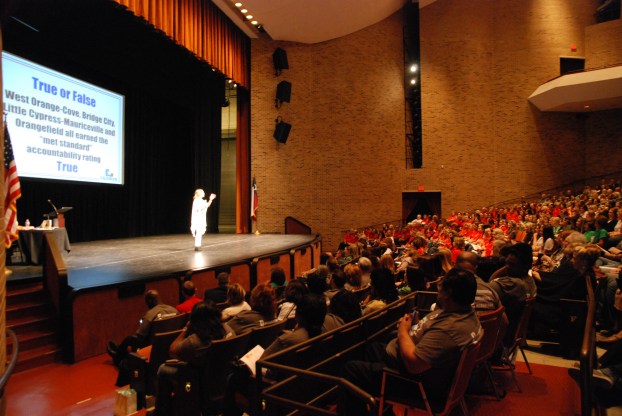 Four major school districts joined together on Thursday for a joint convocation at the Lutcher Theater.

Speakers at the event included Jon Gordon, author of The Hard Hat: 21 Ways to Be a Great Teammate.

Gordon’s best-selling books and talks have inspired readers and audiences around the world. His principles have been put to the test by numerous NFL, NBA, MLB coaches and teams, Fortune 500 companies, school districts, hospitals and non-profits, according to his official website.

“It was a joint effort between Orangefield, Bridge City, West Orange – Stark and LC-M to share in staff development,” Little Cypress Mauriceville CISD Superintendent Pauline Hargrove said. “We were looking for ways to maximize the potential in the most effective way.”

The joint convocation was held so that as many school employees as possible could hear motivational/inspirational author and speaker Jon Gordon, who lived up to his reputation as an outstanding speaker. Gordon is author of several books, such as, “The Energy Bus,” “Training Camp,” “The Carpenter,” and “The Hard Hat.” The latter of these has been used by the districts this year to encourage and teach team-building among staff.

“Jon Gordon is why we went into this together to make it happen,” WOC CISD Superintendent Rickie Harris said. “We pulled our resources. It was great for the teachers and staff.”

To show the joint efforts, a combined band of musicians from each high school played the National Anthem.

The second speaker was Leslie Milder, a public school teacher, the founder of Friends of Texas Public Schools, CEO of Common Sense Communications, and author of Hello My Name is Public School and I Have an Image Problem, a book she released in 2012 to help educators unite as ambassadors for their students and profession, according to her official website. Milder is also a guest editorial columnist for The Orange Leader.

One example of this is the idea that schools have dismal graduation rates, which in actuality have been steadily rising throughout the years, from 3-percent in 1903, to 50-percent in the late 50’s, until now, when Texas public schools topped the nation in graduation rates. The sub-groups, which schools also are rated on, were at the top, too. On 2013, Texas was first in African American and Hispanic graduates, and second in white and economically disadvantaged. These state and national reports normally run two to three years behind the year they are reported in by the state and national agencies.

“The presentation by Jon Gordon, author of The Hard Hat, as well as the presentation by Leslie Milder, Founder of Friends of Texas Public Schools, reminded each person of their responsibilities and role they have when shaping the future of our children,” Bridge City ISD Superintendent Todd Lintzen said. “Each presenter captured our educator’s hearts as evident through their laughter, tears, and cheers during the program.”

Hargrove said the teachers deserved to be treated to speakers of caliber of Gordon.

“It was a fun day with a lot of learning,” Hargrove said. “It was spent with old friends, and new friends.”

While teachers across the county work in the same profession with the goal of providing the best education for the children in the area, many times they do not have the opportunity to interact with each other. The joint convocation allowed teachers and staff to also network with other sin their profession.

During the joint convocation, Vidor ISD also took part in convocation with tours of the Stark Cultural Venues on Thursday. 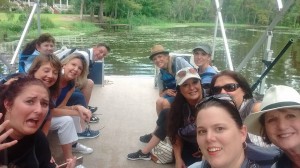 Teachers were introduced to the educational aspects of the venues as well as offered lesson plans to incorporate into the classrooms.

“There is so much beauty and so much to learn in each of the venues,” Packard said. “The students can really gain from these experiences too. A couple of my children even won the Stark reading contest.  It was super cool to learn about them because they really do pump a lot of money back into the community.”

“I have always stressed the opportunities for careers in the arts and all these venues backed that up,” Johnson said.

“I personally enjoyed Shangri La the most because there were so many ways to incorporate each content of learning in there,” Bertrand said. “The tour guides are also former teachers or have an education certification so they are aware of the T.E.K.S.  I will be able to provide more “real-world” experiences from our visit to incorporate in the classroom.”

“Kuykendall is a renowned speaker who has spoken in 49 states,” Superintendent Rickie Harris said. “It is about inspiring the staff for the new school year.”

Kuykendall has also taught at Seton Hall University and Montclair State University. She is the former Executive Director of the National Alliance of Black School Educators as well as a former elementary and secondary school teacher.

She has also served as the Director of Urban & Minority Relations for the National School Boards Association and the Director of the Citizens Training Institute of the National Committee for Citizens in Education. Appointed by U.S. President, Jimmy Carter to the National Advisory Council on Continuing Education, she served as Council Chairperson from 1979-1981. She was also chosen by the educators of Ebony Magazine as one of the “50 Leaders of the future” in 1979, according to her official website.