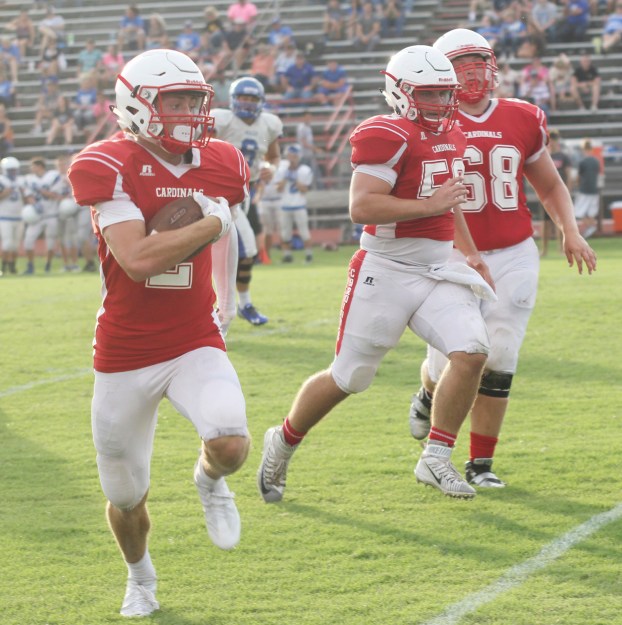 Over at Bridge City, the Cardinals battled Beaumont Kelly and Buna in a tri-scrimmage affair.

The Cardinals dominated the Bulldogs and Cougars in the controlled part of the scrimmage.

Kelly had trouble moving the ball and even picking up first downs against a stiff Cardinal defense. The Bulldogs eventually scored on a 55-yard touchdown bomb against the Cardinals’ second defensive unit late.

Against Buna, the Cardinal offensive line showed its strength with long sustained drives.

Freshman tailback Andy Lara tallied two touchdowns, scoring from a yard out and he also broke loose for a 45-yard touchdown jaunt.

Meanwhile, Bridge City was stern on defense as well against the Cougars, keeping Buna out of the end zone as the Cougars struggled just to manage a few first downs.

The West Orange-Stark Mustangs battled the Port Neches-Groves Indians Friday at The Reservation.

The Mustangs came out stingy on the defensive side of the ball from the onset as they defeated the Indians 19-7 in a 48-minute-styled contest.

Mustang senior quarterback Jack Dallas led WO-S on three nice scoring drives in the first half as he passed for three touchdowns.

The Indians finally got on the board midway through the third quarter on a 32-yard run by Preston Hughes.

WO-Swill be on a quest to make the Class 4A Division I State Championship for the third straight years and will look to repeat as state champion.

The Mustangs will host Vidor in a scrimmage Thursday, Aug. 18.

WO-S will open up the season at home against Nederland. They will not open up defense of their District 12-4A Division II crown until Oct. 7 when Hamshire-Fannett rolls into Hooks Stadium.

The Bears scrimmaged at Coldspring Friday.

The Bears will visit Newton Thursday, Aug. 18 for their second scrimmage.

The first 10-4A game will be Oct. 7 when they make a trip to Silsbee to face the Tigers.

Numbers are good in Bobcat Country as well.

Orangefield tangled with Shepherd in their first scrimmage Friday.

Both defenses played well. The Bobcats got a touchdown when the two first team units played. Neither team scored when the second teams saw action.

The Bobcats will travel to Splendora in a scrimmage Thursday, Aug. 18 with the varsity starting around 6:30 p.m.

Scrimmages crank up for teams Friday

High school football teams will look forward to hitting someone else in another uniform come Friday as scrimmages will get... read more