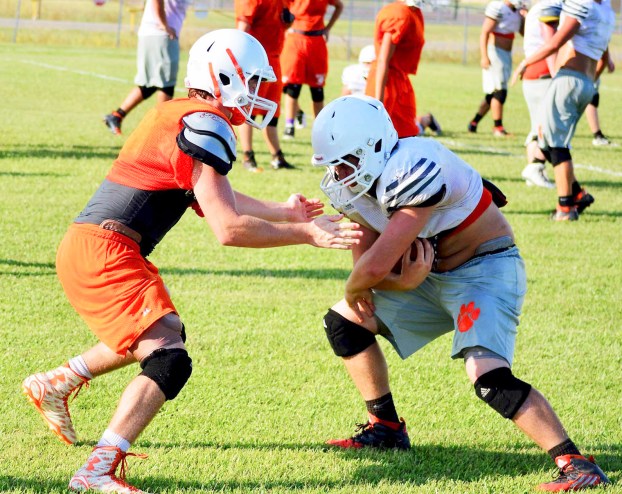 Leader Photo by Ronnie Hughes The Orangefield Bobcats will head to Shepherd for a scrimmage Friday.

Scrimmages crank up for teams Friday

High school football teams will look forward to hitting someone else in another uniform come Friday as scrimmages will get underway.

The West Orange-Stark Mustangs will be on a quest to make the Class 4A Division I State Championship for the third straight years and will look to repeat as state champions as players will hit the practice field Monday morning.

WO-S will have its first scrimmage on the road Friday at Port Neches-Groves at 7 p.m. The Mustangs will host Vidor in a scrimmage Thursday, Aug. 18.

The Mustangs will open up the season at home against Nederland. They will not open up defense of their District 12-4A Division II crown until Oct. 7 when Hamshire-Fannett rolls into Hooks Stadium.

“The kids came in the first day in pretty good shape,” said Crouch. “Our numbers are about the same as last year, which is pretty good. Each day has been pretty good for us. Our conditioning has improved and we’ve been able to get a lot of good reps in.”

The Bears will hit the road for two scrimmages. They will go to Coldspring Friday with the freshmen and JV starting at 9 a.m. followed by the varsity at around 10:30 a.m. The Bears will visit Newton Thursday, Aug. 18.

LC-M will kick off its 2016 campaign on the road against former 10-4A foe Jasper.

The 10-4A game will be Oct. 7 when they make a trip to Silsbee to face the Tigers.

The Bridge City Cardinals will look to carry their momentum from last year into this season as Coach Dwayne DuBois’ Redbirds will look to improve on last year’s superb 7-4 campaign in which they bolted into the playoffs.

Bridge City will host a tri-scrimmage with Buna and Beaumont Kelly Friday, Aug. 12 with the varsitys starting around 6 p.m. and will visit Kirbyville Thursday, Aug. 18 for its second scrimmage.

Numbers are good in Bobcat Country as well.

The Vidor Pirates will look to make the playoffs in a revamped District 22-5A after going 3-7 last season.

The Pirates will still compete against the likes of Nederland, Port Neches-Groves, Beaumont Central, Beaumont Ozen, Lumberton and Baytown Lee but Port Arthur Memorial and Livingston will be added to the mix this time around in what will be an eight-game 22-5A schedule.

Coach Jeff Mathews will certainly welcome back some experience as nine Pirate starters return on offense and eight on defense.

The Pirates will crank up their season Aug. 26 when they play host to the Barbers Hill Eagles. The 22-5A season will come early as Vidor will venture to Beaumont to face Central Sept. 10.