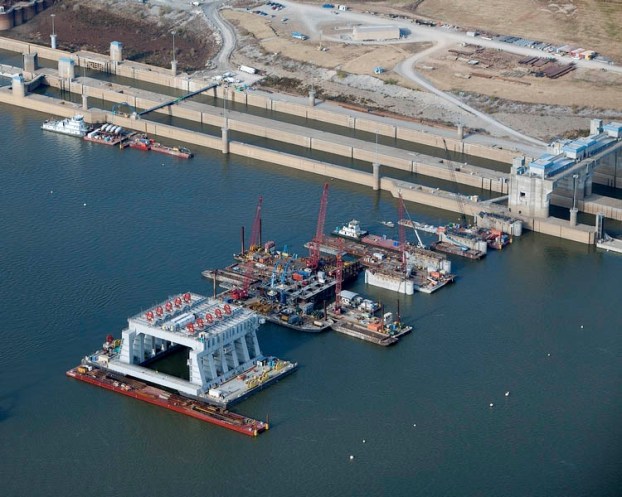 Photo courtesy of U.S. Army Corps of Engineers The $2.918 billion Olmsted Lock and Dam Project will significantly reduce tow and barge delays through the busiest stretch of river in America’s inland waterways.

MORGAN CITY, LA — Conrad Shipyard has been awarded a contract by the U.S. Army Corps of Engineers for the construction of a crane barge that will operate on the Olmsted Locks and Dam Project. Johnny Conrad, Conrad President and Chief Executive Officer, made the announcement.

“Conrad Shipyard has a long history of building vessels for the Army Corps of Engineers. This award is a testament to the extraordinary level of quality and craftsmanship that Conrad consistently delivers,” he said.

The crane barge, which will be built at Conrad’s Morgan City shipyard, has a hull length of 110’-6”, beam of 60’ and molded depth of 8’-6”. In addition to barge construction, Conrad will also install two government-supplied cranes—a wicket lifter crane and a telescoping marine crane. The floating crane barge will be used to raise and lower the steel dam wickets and perform maintenance functions at the Olmsted Lock and Dam on the Ohio River. When raised, wickets block water and feed it to adjacent boat locks that safely harbor barges to a lower elevation when the river is low. The barge will be ABS classified as a Maltese Cross A-1 Barge, Maltese Cross AMS, CRC, for service on rivers and Intracoastal waterways as a Government Floating Crane.

The Olmsted Locks and Dam Project is the largest and most expensive inland water navigation installation ever built in the United States. More than ninety million tons of material is shipped through the locks annually.

Conrad Shipyard was established in 1948 and is headquartered in Morgan City, Louisiana. The company designs, builds and overhauls tugboats, ferries, liftboats, barges, offshore supply vessels and other steel and aluminum products for both commercial and government markets. The company provides both repair and new construction services at its five Gulf Coast shipyards located in southern Louisiana and Texas including a location in Orange.