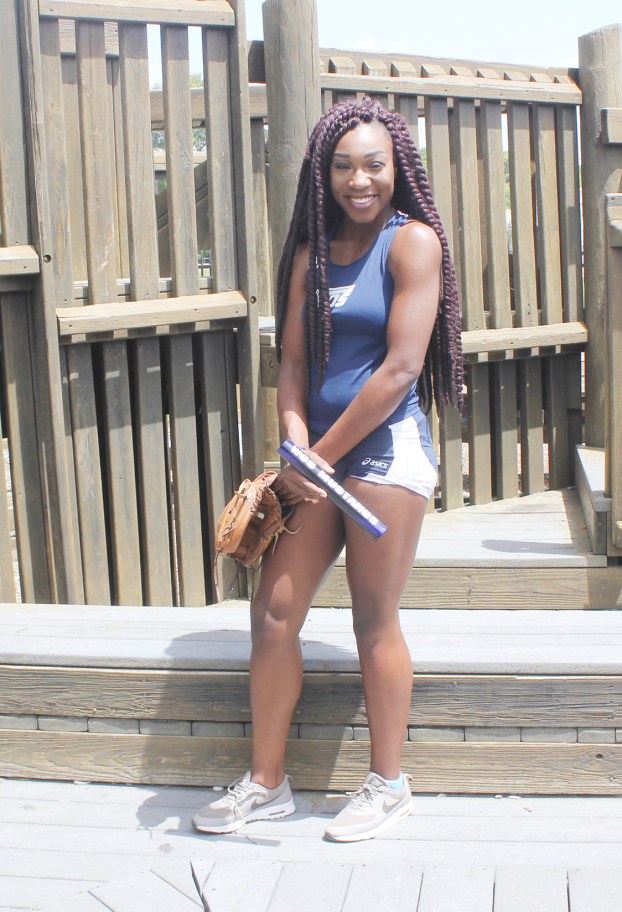 WEST ORANGE — Leaving a lasting impression, that is certainly what Aaliyah Teel did in her run wearing a West Orange-Stark Lady Mustang uniform.

Whether it was track & field, which is definitely her specialty, or volleyball or softball, Teel excelled for four seasons at WO-S.

She made an impact each year but in her senior campaign, she certainly made it count.

With her amazing talents, Teel is the 2016 Orange Leader Female Athlete of the Year.

“It’s a great way to be honored,” said Teel. “All of my family, teammates and great coaches over the years, I am so grateful for them. They really pushed me to try to be the best I could be. I’ll never forget all of the memories I had at West Orange-Stark, that’s for sure.”

Teel was certainly magical when she took to the track at an early age.

She pushed herself to be the best she could be. She was constantly on the track, honing her skills and helping her teammates excel along the way.

She qualified for the Class 4A State Track Meet as a junior.

As a senior, she totally dominated the Southeast Texas area and shined at regionals as well.

“I look back to my freshman year when all I was mainly worried about was getting the handoffs on the relays right,” said Teel. “Going to State was not even on my mind then. I was able to learn fast though with some great coaching. One thing about running track at WO-S, you know you’re running for one of the best programs in the state and we always take a lot of pride in that.”

With her work habits, she found herself at the State Meet this year qualifying for three events.

She came in fifth in the 100 meters and was a critical anchor leg in the Lady Mustangs’ 800-meter and 1,600-meter relay units that also qualified for Austin.

She finished with the fastest 100-meter time in the Southeast Texas area last season, running a 11.84.

She will continue to hone her track talents by signing a scholarship Stephen F. Austin University in Nacogdoches. She received several offers but being a Lady Jack seemed to be a perfect fit.

“I can’t wait to officially move up there and get things going,” said Teel. “I love it there and know some people, so it won’t all be totally new. My main goal is to be a physical therapist and SFA has one of the best programs in the country and that’s definitely what I want to do.”

During the volleyball campaign, Teel’s intensity was second-to-none as opponents were fearful of her potent spikes that sometimes were bouncing off their heads before they even knew it. And then there was her famous dink shots that had opponents back-pedaling.

“I so loved volleyball, especially last season,” said Teel. “I could play it every day, that’s how much I loved it. Volleyball is very competitive around our area and I wanted to be one of the best. I worked really hard and pushed myself. I had so much focus my senior year and really wanted to go out and accomplish some things and I was able too.”

Long-time Lady Mustang volleyball coach Gwen Kelly-Hall constantly fed the senior leader and her Mustang teammates knew where to go and who to set up in the pinch.

Teel, a three-time All-District selection, was simply amazing in her final campaign. With her senior leadership paving the way, the Lady Mustangs ended a long playoff drought with flair.

“I knew we could make a playoff push and everyone was so focused on getting it done and making it to the playoffs,” said Teel. “We knew we always had the talent, it was just about putting it all together. Coach Gwen made me feel comfortable and kinda put me in a leadership role and that made me feel so great. The fun we had as teammates is something I will always remember and we will always stay close. Just wished we could’ve went past the first round of the playoffs. We felt like we could’ve played better but we’re proud of the season we had, for sure.”

The Lady Mustangs posted a 9-3 record in District 24-4A play, finishing second only behind district champion Silsbee.

Teel, also the Most Valuable Player on the All-Leader Volleyball Team, finished with more than 1,000 kills in a Lady Mustang uniform.

She also found time to collect 92 blocks and had 26 service aces.

Teel was recruited heavily to play volleyball at the University of Colorado but track and SFA is her true loves.

Teel also played softball all four years. She made All-District as a junior and senior outfielder, covering the field like a gazelle. She also hit over .300 each year for coaches Randy Ragsdale and Joseph Viator.

“Softball was fun and I loved running around and chasing the balls in the outfield,” said Teel. “It was fun playing both softball and running track in the springs and I am grateful for the coaches working with me and my schedule to allow it to happen. Just created even greater memories for me.”

Teel may be a Lady Jack soon but will always be a Lady Mustang at heart.

“I will always love WO-S and will remain close to so many people that have played such major roles in my life,” said Teel. “The thing about WO-S is that we are mostly one big happy family. Everyone is so supportive, from your classmates, coaches and administrators. The experiences I had there will be ones that I will cherish forever.”

WEST ORANGE — Sometimes a lot of us must think that West Orange-Stark senior-to-be Jack Dallas has to pinch himself... read more