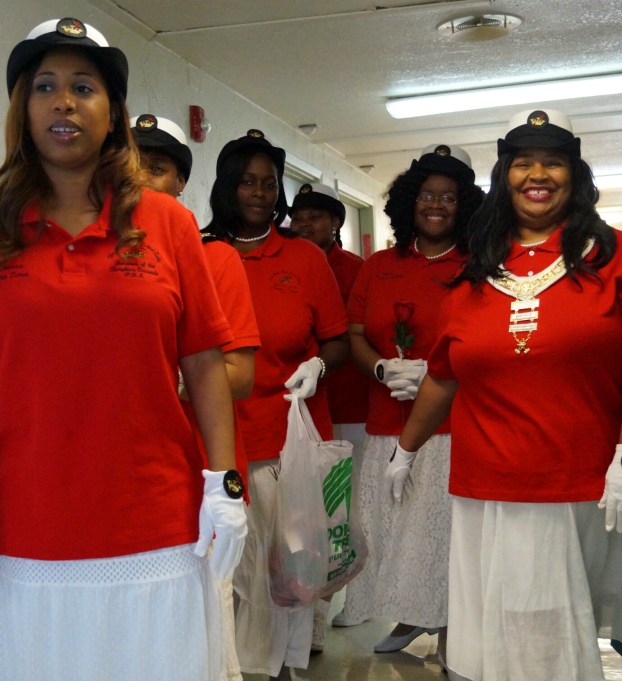 Randy Strong/The Orange Leader Members of the Gate City Guild #42 actively find ways to give back to the community. In February, the group presented valentines for residents at a local nursing home. In March, the ladies offered sack lunches and clothing to flood victims.

Chartered in February 2015, Gate City Guild #42 has given back to Orange since.

Gate City Guild #42 and Gate City Commandery is part of the Adopt-A-Street program in Orange. The group opted to adopt two streets instead of the usual one.

“We have two areas, a street and a highway,” Benitris Edwards said. “They were dirty and needed to be cleaned.”

City of Orange Director of Planning and Community Development Kelvin Knauf asked the group if they were interested in adopting a street. Edwards said in the process of keeping the streets litter free is the organization has met new people.

“We enjoy what we do,” Edwards said.

The guild has also collected toys and items for Shriners Hospital for Children in Houston. The items were taken to the hospital in December last year to help bring some holiday cheer to patients. In March, the group passed out lunches and clothing to area flood victims and in February, the ladies presented valentines for residents at a local nursing home.

“Meeting new people with the same goals assist in lasting relationships,” Ola Kindle said. “We come from all backgrounds and all have something to offer.”

Gate City Guild is part of the Heroines of the Templar Crusade, the women’s auxiliary to Knight Templar. The Woman’s Crusade was established in Texas and its Jurisdiction, Prince Hall Affiliate in the year 1924.

It was organized in St. Louis, Missouri in the year 1917.

The Prince Hall Masons are the oldest and largest group of Masons of African origin in the world.  Today there are forty Grand Lodges of Prince Hall Freemasonry in the United States, Canada, the Bahamas, and Liberia.  These Grand Lodges preside over more than 5,000 lodges.  All of them claim descent from the Prince Hall Grand Lodge of Massachusetts, which is traced back to the African Lodge No. 459.

Due to prevalent racism and segregation in North America, it was impossible for African Americans to join most mainstream Masonic lodges until the late 20th century.  Yet, because Prince Hall Mason lodges were African American, North American Grand Lodges denounced Prince Hall Lodges and Prince Hall Masons, deeming them illegitimate and refusing to recognize their authority.  Until 1865 most Prince Hall lodges were in the North but after the Civil War, black Masonry quickly spread across the South, often led by Northern-born Masons who became active in Reconstruction politics. During the years of Reconstruction and continuing to 1900, Prince Hall Masonry remained a highly prestigious but small fraternity. By the early 20th century the membership rapidly expanded, lessening its exclusivity, according to Blackpast.org

“It builds a sisterhood based on respect, Christ and leadership,” Arnold said.

Kindle said the organization is not for everyone.

“It is an unselfishness to help those who are less fortunate without expectations for anything,” Arnold said.

The guild is holding a Back to School Fundraiser behind the Wal-Mart gas station. The groups will sell Barbeque chicken and sausage or fish dinners with potato salad, green beans and a drink for $10 to benefit the Back to School, School Supply Drive the organizations is holding on Aug. 13.

Gate City Guild #42, Cate City Commandery #43 and Gate City Lodge #31 will be giving away school supplies from 10 a.m. – 3 p.m. at Lions Den Park in Orange. There will be free hotdogs, drinks and barber haircuts for the kids.

A motorcycle convoy traveling from California to New York for 9/11 stopped at Crawdad’s at Interstate 10 and farm to... read more