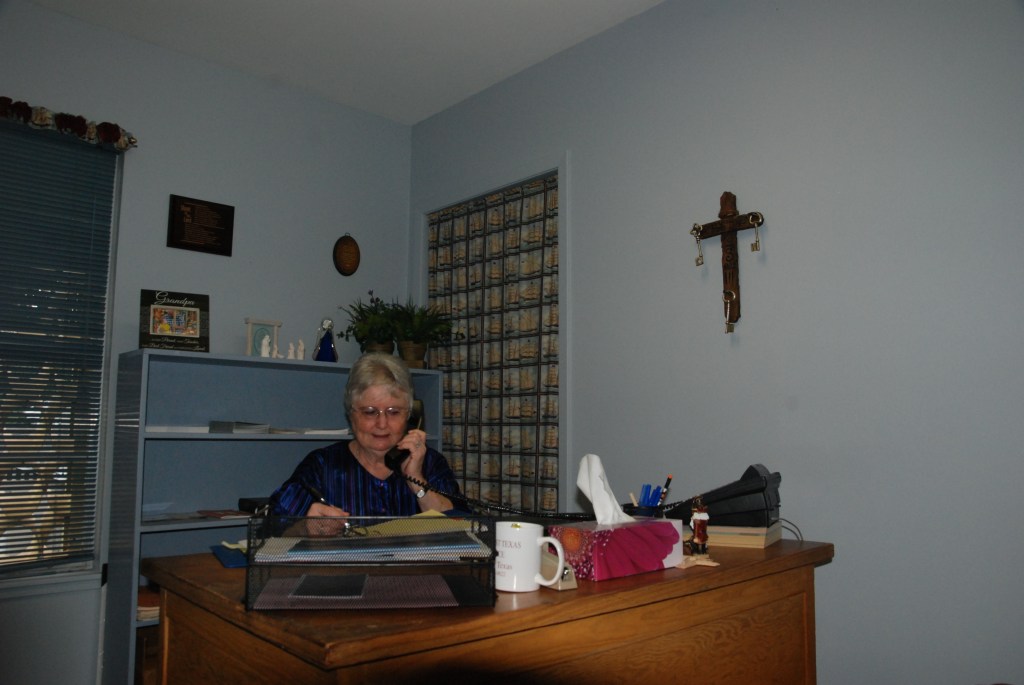 Dawn Burleigh/The Orange Leader Rebecca Phelps calls a client who has recently lost a loved one as part of the Bereavement Support offered by Hospice.

“I originally trained in 1986,” Phelps said. “I have volunteered since minus four years of being inactive. I was an indirect volunteer.”

Phelps began as a Patient Volunteer and is now a volunteer for Bereavement Support.

“The bears are made by volunteers,” Phelps said. “The patients have been buried with the bears in some cases.”

Phelps admitted volunteering with Hospice is not for everyone.

“Some weeks it is hard to be here,” Phelps said.

Being one of the volunteers who calls caregivers after the death of a loved one, Phelps also has to evaluate the emotional needs of the caregiver.

“Sometimes asking if they are ok or in what way do they need help is part of the grieving process,” Phelps said. “I have evolved with more experience. Sometimes they do not have a support network or no one to turn to.”

Most of the calls Phelps make will last approximately two hours.

“They will ask if it is ok to vent, or if that is normal,” Phelps said. “There are all kinds of situations with caregivers.”

Phelps first heard Southeast Texas Hospice was in need of volunteers through a couple who she met with to play Bridge.

“It sounded interesting, so I said alright,” Phelps said. “My friend was hired as Director of Volunteers.”

One must be discrete, do not repeat and stay current with record keeping as a volunteer.

“It can be interesting,” Phelps said. “Interesting things have popped up over the years.”

“Not everyone can go into the homes,” Thibodeaux said. “We can use volunteers elsewhere.”

Volunteers will work on crafts for the holidays, sometimes making cards for the nurses to deliver to the patients. Volunteers also provide refreshments for the annual Toilet Paper Tea.

“After the volunteers complete the training course, we give them a list of options for volunteering,” Thibodeaux said. “It takes an enormous circle of volunteers for everything from refreshments to mailing labels.”

“Volunteers are like a friend for the caregivers,” Thibodeaux said. “There is a special tie there.”

Rebecca Phelps, as Bereavement Support, helps caregivers discover the services and support available as one moves through the stages of grief.

“Caregivers know how they are doing,” Phelps said. “They are too busy to take care of themselves.”

Each situation is different, as if it is the person’s first loss or if they have lost others before.

“If someone has lost three or four members of a family, they know what stages they are going through,” Phelps said. “Someone who has not gone through a person dying before has a harder time. As my sister says, everyone has their own way.”

Phelps also said people will talk to a faceless voice on the phone and say things they would not say to a person.

“They will get mad at us because they are mad at the situation,” Thibodeaux said. “We have to have a hard shell and understand.”

“We help them understand,” Phelps said.