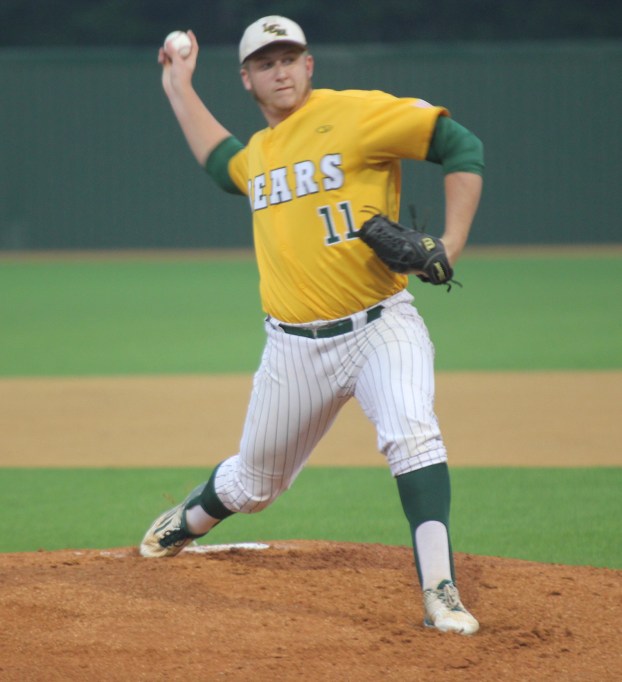 JASPER – Those Little Cypress-Mauriceville Bears continued their
magical run Thursday night.
Wait, make that a talented run.
The Bears put together a complete team effort to dismantle Districtb24-4A rival Silsbee 7-2 Thursday night in the Class 4A Region III quarterfinals at Jasper High School to advance to the regional semifinals next week.
Pretty darn salty for a team that was 3-6 in 24-4A play a little less than a month ago. All the Bears have done since then is win eight out of nine games.
Now they will move on to face either Jasper or Carthage in the regional semifinals.
“I couldn’t be prouder of these kids,” said longtime Bears coach Steve Griffith. “They continued to believe in themselves. They’ve been in a must-win situation the last month and they rallied together and have been special to watch. The thing I like about this team the most, is that they are smart kids. They know what it takes. Really proud of all of them, especially our seniors.”
Proud for sure, after all the Tigers defeated the Bears 12-2 and 6-2 during the district campaign.
The Bears blistered the talented Silsbee pitching duo of Travis Sundgren and Chase Partain as they scored runs in each of the first four innings.
The Bears finished with nine hits and also took advantage of six walks, two hit batter and a pair of Tiger errors.
“We put the ball in play against two excellent pitchers,” said Griffith. “We saw the ball well early and gave ourselves some momentum and it continued to carry over.”
Meanwhile, Bear senior Mitchell Lee cruised to a complete-game six-hitter, striking out seven and walking just one.
“I was a little worried about myself early because I looked miserable warming up in the bullpen,” said Lee. “The best thing was the great defense I had behind me in the first couple innings. After that, I kinda settled in. I felt comfortable that my curveball was working. It’s an amazing because no one would’ve ever thought we would be
sitting here in the fourth round. Right now, we are having a blast and hope that the great run continues.”
Griffith was proud of the pitcher.
“I like, everyone else was a little worried after we saw him early in the bullpen,” said Griffith. “But once the game started, Mitchell found his spots and he had a really good performance. That’s the kind of thing you expect out of a senior like him. He wanted the ball tonight and he proved it.”
The Bears struck for a pair of runs in the bottom of the first inning off Tiger starter Sundgren.
Drake Trawhon got it going with a leadoff single to right. Trawhon zipped to second after a nice sacrifice bunt by Vinny Hale and moved to third on a wild pitch.
Mitchell Lee drew a walk. A Michael Lee groundout moved runners to second and third and catcher Grant White took a Sundgren offering and planted it in shallow rightfield to put the Bears up 2-0.
The Bears scooted in a run in the bottom of the second.
Peyton Choate, who was 3-for-4, belted a leadoff triple that went all the way to the centerfield wall. He scored when Truman Franklin slapped a RBI single to right.
LC-M snagged another run in the bottom of the third.
Hale led off with a infield single and went to second on a wild pitch.
With one out, Michael Lee reached on a third-strike passed ball. White then hit into a fielder’s choice as Lee was out at second but Hale was able to score.
The Bears picked up three insurance runs in the bottom of the fourth
as Partain replaced Sundgren on the Silsbee hill.
Tyler McCorvy and Seth Dronett drew back to back walks and Partain hit Trawhon with a pitch to load the bases.
Hale then hit a grounder, Trawhon was forced out at second, McCorvy came across to score and so did Dronett after a throwing error to first to make it 6-0.
After Mitchell Lee drew a walk, Ethan Dunn replaced Partain on the Tiger mound. With to outs, White drew a walk and Choate then sent a RBI single to left to plate Hale.
The Tigers added a run in both the top of the sixth and seventh innings.
Mason Murray led off the sixth with a single to left and swiped second with one out and scored when Partain sent a RBI double to left.
In the top of the seventh, Jacob Collins reached on an infield single and Sherman Holland reached on an error. With two outs, Dunn drove in Collins with a infield single.