Cardinals bounce back to batter Bellville 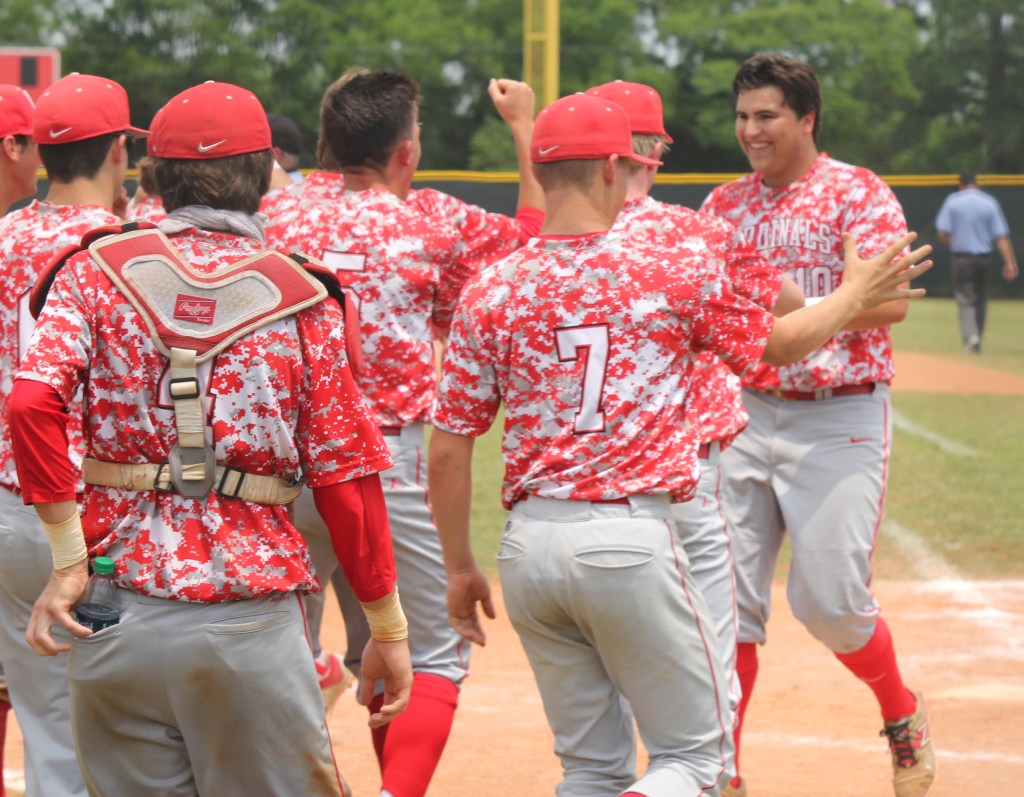 Leader Photo by Van Wade Bridge City's Tanner Doiron is greeted by teammates after he belted a two-run home run against Bellville Saturday.

BAYTOWN & SWEENY – Finding themselves down but not out in their Class 4A Region III area round series against Bellville, the Bridge City Cardinals found their sticks and received excellent pitching from seniors Tod McDowell and Kyle Bergeron as the Cardinals drilled the Brahmas 17-2 in Game Two and 7-0 in Game Three after dropping Game One 5-2 on Friday.

The Cardinal offense was smoking throughout the day, piling up 23 hits.

Bridge City will now move on to face District 24-4A rival West Orange-Stark in the Region III quarterfinals next week.

In Game Three the Cardinals snagged three runs on two hits to go up 3-0 in the first inning.

Bergeron drew a leadoff walk from Bellville starter Jake Ciebowski then swiped third and reached on an error.

McDowell would drill a stand-up triple to score the Cardinals’ first run. After Tanner Doiron drew a walk, Caleb Dubois drove in McDowell with a sacrifice fly to make it 2-0.

Bridge City increased it to 4-0 in the bottom of the second.

The Redbirds tallied two more runs in the bottom of the fifth.

McDowell drew a leadoff walk and scored when Doiron plated him with a standup double.

After Dubois moved Doiron to third on a sacrifice bunt, Austin Fitts brought him in with a RBI single to shallow center.

Bridge City tacked on a run in the bottom of the sixth.

Bergeron reached on a one-out error and Schuyler Thibodaux had an infield single. Courtesy runner Derick Dearing made it 7-0 by scoring on a passed ball.

The Cardinals blistered the Brahmas for 16 hits in the Game Two 17-2 rout.
Senior pitcher McDowell went all five innings for the Cardinals, allowing five hits while striking out six and walking two.
Bellville got on the board first when Kevin Black drove in Conner McIntyre with a single to left in the bottom of the first.
The Cardinals then got the sticks rolling in the top of the second with five runs on four hits.
Austin Fitts got it going with an infield single. Riley Harris followed with a deep double to right. Fitts came in to score after a Kevin Gordon single to shallow left to tie the game up.
Justyn Romero kept the Cardinals ahead to stay when he belted a two-run double to left off Bellville starter Kyle Collins. Romero eventually scored when Schuyler Thibodaux slapped a single to left to make it 4-1.
The Cardinals tacked on four more runs on four hits in the top of the third.
McDowell had a leadoff double to right and Tanner Doiron followed with a bunt single. Caleb Dubois made it 5-1 with a RBI bunt single.
Fitts was hit by a pitch to load the bases. Harris then drove in two more runs with a single to right. Gordon eventually made it 8-1 with a RBI groundout that plated Harris.
The bleeding continued for the Brahmas as the Cardinals zipped in four more runs in the top half of the fourth.
Kyle Bergeron led off with a single to left and scored when Thibodaux belted a deep double to left centerfield. With one out, Doiron cracked a two-run home run blast over the leftfield fence for a 11-1 Redbird edge.
Fitts singled with two outs and Harris drew a walk. Gordon reached on an error as Fitts raced in for a 12-1 Bridge City edge.
Bellville scratched in a run in the bottom of the fourth as Tanner Riden had a one-out double to left and scored on a two-out double to left by Caleb Henderson.
The Cardinals finished it off with four hits and five runs in the top of the fifth.
The big hit was a Bergeron leadoff triple to center and he eventually
scored on a wild pitch.
Thibodaux and McDowell followed with back to back singles to right and Doiron singled to load the bases. Kade Wheat brought in one of the final runs with a sacrifice fly to right.