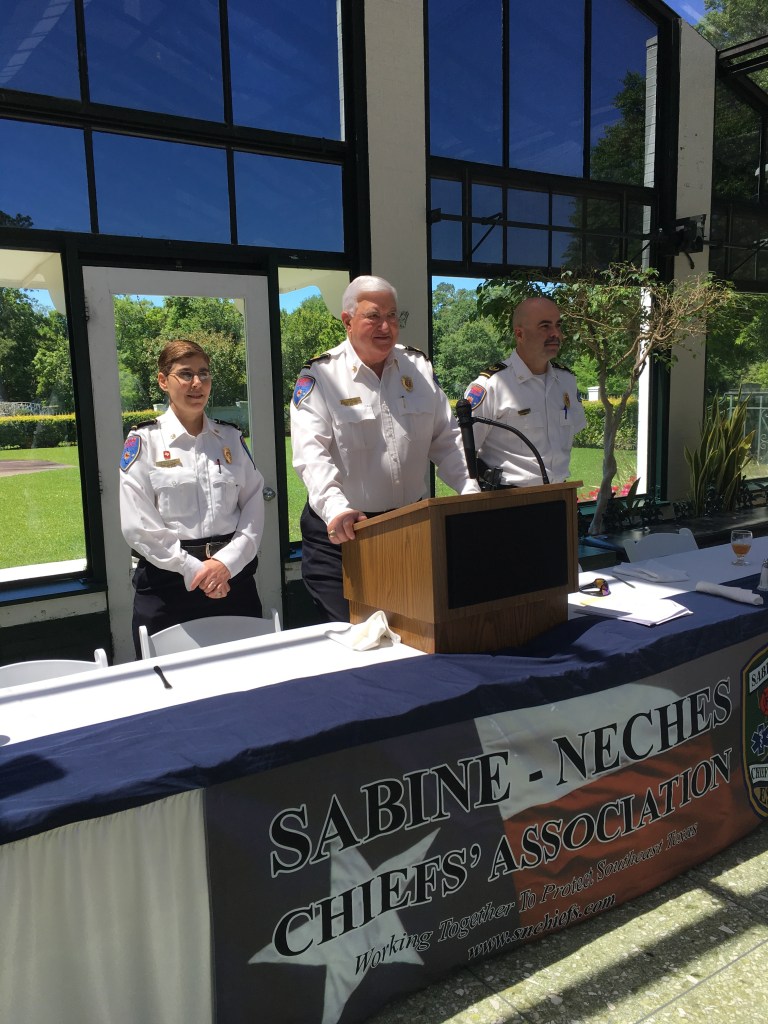 Photo courtesy of the City of Orange City of Orange Fire Department hosted the 800th monthly meeting of the Sabine Neches Chiefs Association at the Brown Estate of Lamar State College – Orange.

The City of Orange Fire Department hosted the 800th monthly meeting of the Sabine Neches Chiefs Association, which was held May 4 at the Brown Estate of Lamar State College – Orange. There was an estimated 100 guests in attendance. The Sabine Neches Chiefs Association is a mutual aid organization of municipal fire and police agencies, industrial fire and security agencies, and state and federal emergency response groups from Jefferson, Orange, and Hardin counties that have worked together for the safety of our region since its inception in 1949. The Orange Fire Department was a charter member of this group when it was formed.

After a brief business meeting, a program was presented by Meteorologist Roger Erickson with the National Weather Service – Lake Charles concerning information about the upcoming hurricane season. Erickson shared that critical months along the Gulf Coast include August and September, and he announced a slightly busier hurricane season. Factors include, a transition from El Nino (a warm and wet season) to La Nina (a cool and dry season), and warmer waters in the Atlantic Ocean. Erickson also mentioned a prediction of ten to twelve named storms with three to five with a possibility of a category three or stronger.

Chief David Frenzel opened the meeting by welcoming all in attendance to the City of Orange.

“In my opinion, the Sabine Neches Chiefs Association is the most important and influential organization that the City of Orange participates in, assuring the safety of the citizens we serve through the extensive mutual aid contacts of area wide industry, fire service and law enforcement,” Frenzel said.