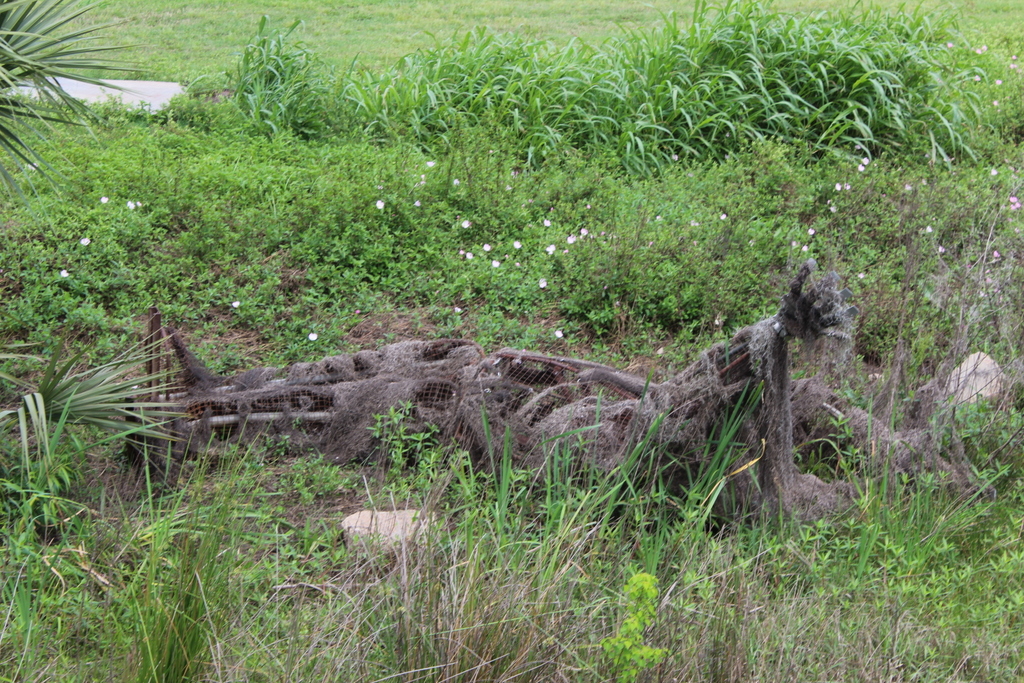 Mike Louviere/The Orange Leader American Airboats’ Swamp Monster, a victim of the flooding last month, is currently waiting for repairs so he can once again great motorists traveling along Interstate 10.

ORANGE — For about 25 years, the Swamp Monster has stood guard over the property at American Airboats.

“I thought it would be neat to build a swamp monster, since we are located on the edge of the swamp. Over the years people who have entered Texas have stopped to take a picture at the big star at the information office, and then a lot of them stop here to get their picture with our swamp monster,” Stan Floyd, owner of American Airboats, said. “The flood waters came across him at about 35 miles an hour and knocked him off the steel plate he was mounted on and left him in the ditch.”

The big figure with a steel framework is covered with screen and natural Spanish Moss they gather in the swamp behind the shop. It once stood over 10 feet tall and weighed about 350 pounds. Raoul Garcia and Floyd designed and built the monster. Garcia has been an employee of Floyd’s since 1984 when Floyd was located in Houston. When Floyd moved to Orange, Garcia came too. They have a unique relationship based on mutual respect. Garcia is totally deaf and communicates with Floyd with a unique sign language that the two men developed over the years.

“At one time, we had the monster moving,” Floyd said. “We took an old Chevrolet flywheel and an electric motor and had him moving his arms and his body a little bit. Raoul was the one who designed the moving parts. He is a remarkable man. He is my best employee and has been with me the longest.”

At the present the monster is laying in the bottom of the big ditch it once stood on the edge of.

The office at American Airboats got nearly two feet of water inside during the flood and the shop received several feet. The business is operating, but the office needs some new furnishings to get back to full speed. Whenever the restoration from the flooding is finished, the next project will to be to rebuild the Swamp Monster.