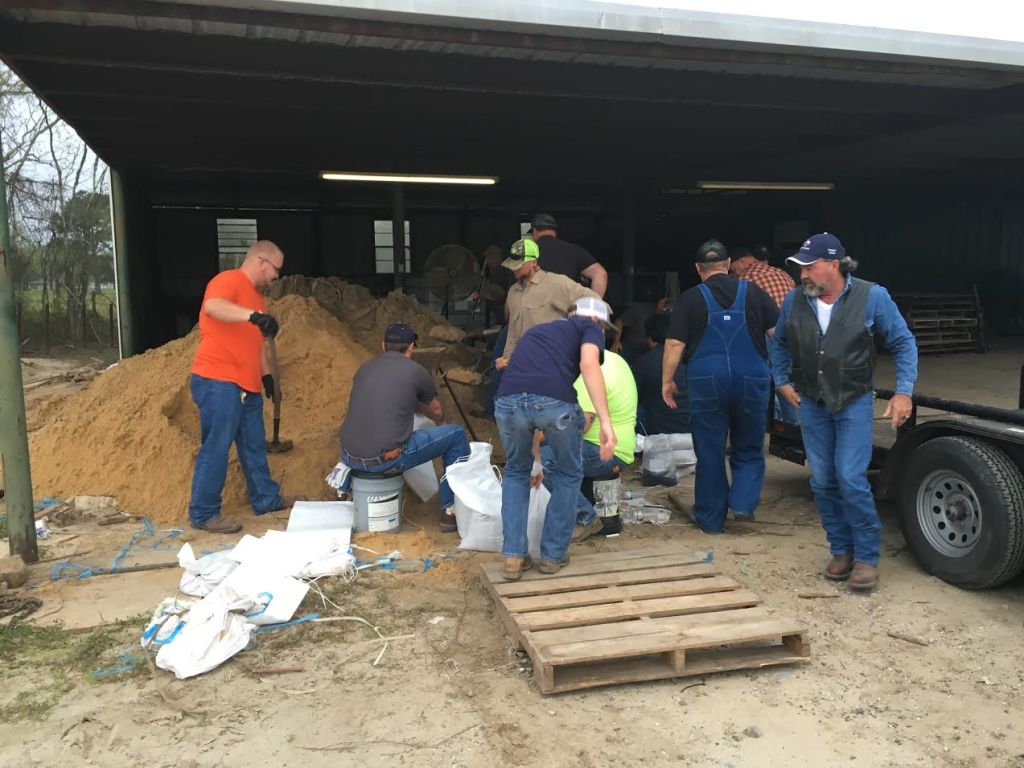 When the District found out that there was going to be major flooding, they went into action. “On March 11, we knew that there was going to be flooding, so we began discussing the situation with the county commissioners and doing some “drive arounds” to try to see where major flooding was likely to occur. March 12, we began to observe the rising waters at Deweyville. Sunday, March 13, we began to call in crews to begin to fill sandbags,” OCDD General Manager Mark Stephenson said. “We had a few loads of sand and some bags to begin with, so we were able to get a start on bagging the sand for those who would need sandbags.”

Several sites in the county provided sand and bags for persons needing sandbags to fill. OCDD provided filled sandbags. From Sunday until Wednesday, the employees of the OCDD filled nearly 11,000 bags. They worked eight hour days shoveling sand into the bags and loading the bags for those who needed them.

“We had a system set up. The bags were filled and the people could come in one gate with their trucks and trailers and we would load the bags for them and then they could drive out another gate. Things worked very smoothly,” Stephenson said. “The whole project took 192 cubic yards of sand. We got the sand from the Ross Ridge Sand Pit in Rose City. It was very good sand to work with and we were lucky enough to find sand that was dry enough for bagging.”

Each of the 48 employees of OCDD took some part in the bagging project. There were employees that had flooded houses that still took time to bag sand. The ladies that work in the office took care of the men on the shovels. They kept them supplied with food and water. Food was donated from several sources. Everyone worked together on the very labor intensive project. Most of the time there were at least 30 employees either filling bags or loading bags for those who needed them.

“We were lucky that we did not have any major blockage of any of the bayous or canals that needed to drain. So far we have not discovered any log jams or anything of that type that would cause a drainage problem that we need to attend to. The water is draining, but it is a little slow running off,” Stephenson said. “We did some drive bys looking for problems, but the majority of our effort was providing sand bags. I did not have anyone I called on to refuse to do the work that needed to be done. We have a great group of employees that really care about Orange County and the citizens needs.”

The attitude at OCDD is that the District is funded by tax dollars, and the employees are community spirited people that want to take care of the tax-paying community. The way they provided filled bags is one good example of this attitude.

“There are a few people that I want to thank for the services they provided to OCDD during this flood. Orange County Sheriff Keith Merritt brought over two to three trustees from his work program each day. They worked with us very well and we appreciate the efforts they gave us daily. Precinct 2 County Commissioner Barry Burton made every meeting we held and gave us any assistance we asked for. He was a very visible commissioner and was a great help. Phil Kelly from Jefferson County Drainage District 7 donated 1,000 filled sand bags,” Stephenson said. “We sent a truck over and they had the bags ready to be loaded, and helped us load them. That was a great help and gave us a sort of ‘jump start’ on furnishing bags. Alan Sims, Carroll & Blackman, Inc. provided 3, 000 wrap ties for the sand bags. Willie Stark with Precinct 2, Jasper County donated four loads of sand. Matt Hebert with O’Reilly’s in Bridge City provided hamburger and hot dog dinners for our employees. James with Sparklett’s Water in Beaumont donated several cases of water for our use. Most of all, I want to thank our employees for working so hard daily to help their fellow citizens. They are a great bunch of people to work with.”