Waiting for water to recede 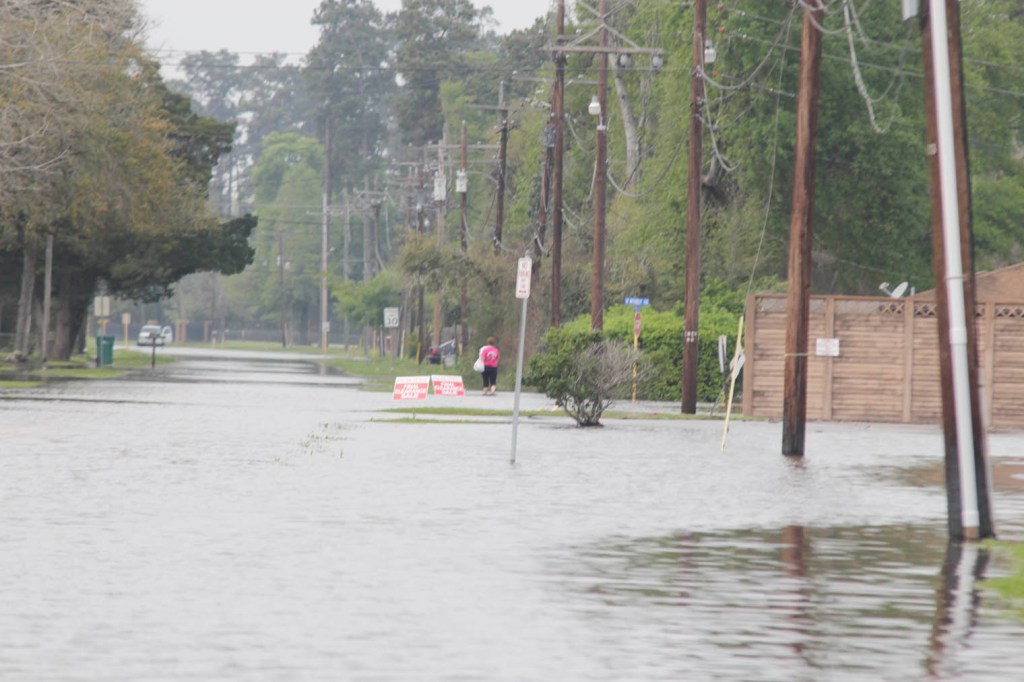 Water levels are maintaining at 7.57 feet at Sabine River as residents question when the water will start receding.

Harry Bias, of Orange, walked from Second Street to 10th Street in Orange on Thursday to pick up supplies for his aunt.

“There is just too much water for her to leave her house,” Bias said. “She says she is ok. I walked to her house to check on her.”

According to Bias, the closer to Simmons Drive, the worse the water.

“I live in the Oaks and it is bad over there,” Bias said. “We saw wild hogs running through there this morning.”

Wild life is a concern for residents in the areas affected by the flooding.

Officials want to remind citizens wildlife is coming in as well as the water as the animals also trying to escape the rising waters.

Residents are also reminded helicopters and airplanes will continue flying over the area to access the damage. For safety of those first responders, drones are not permitted in the areas.

Concerned citizens outside the affected areas are questioning the damage thus far. While actual damage cannot be analyzed until after the waters recede, The Orange Leader has posted several pictures on the paper’s official Facebook page and website. Hundreds more may be seen at http://photos.orangeleader.com/

The waters may affect students returning to school next week after Spring Break.

West Orange – Cove CISD will make a determination regarding school closure on Saturday, March 19. At that time, administration will have more complete information regarding the status of the schools and the level of the floodwaters within the community. As soon as a decision is made the school will notify the media, parents, and staff.

Kurviest Murphy, of Cove, has maintained a watch on family and neighbors homes in his area.

“I don’t see the water getting much higher than it is now,” Murphy said Thursday morning. “We have to go by the tides as well.”

Murphy said he warned his wide to watch out for unwelcomed animals in the area.

“Another issue with this water and living by the march is we need to be aware of snakes, nutria rats and gators,” Murphy said.

While Murphy said the waters had not invaded his house yet, he is hoping the north wind with the rain expected this evening into Friday, will help take some of the water out.

The Sabine River near Orange is expected to hold near 7.5 feet for another 24 hours. However, the city of Orange and areas north of Interstate 10 towards Little Cypress should see slowly receding waters during this time, according to the National Weather Service.

Rachel Brady, of Orange, surveys the waters flooding Meeks Drive at the feeder road and towards the neighborhood behind Northway Shopping Center.

“Where I live is fine,” Brady said. “I am just surrounded by water on the surrounding streets.”

Brady’s mother owns a business in downtown Orange and moved everything to Brady’s house during the evacuation.