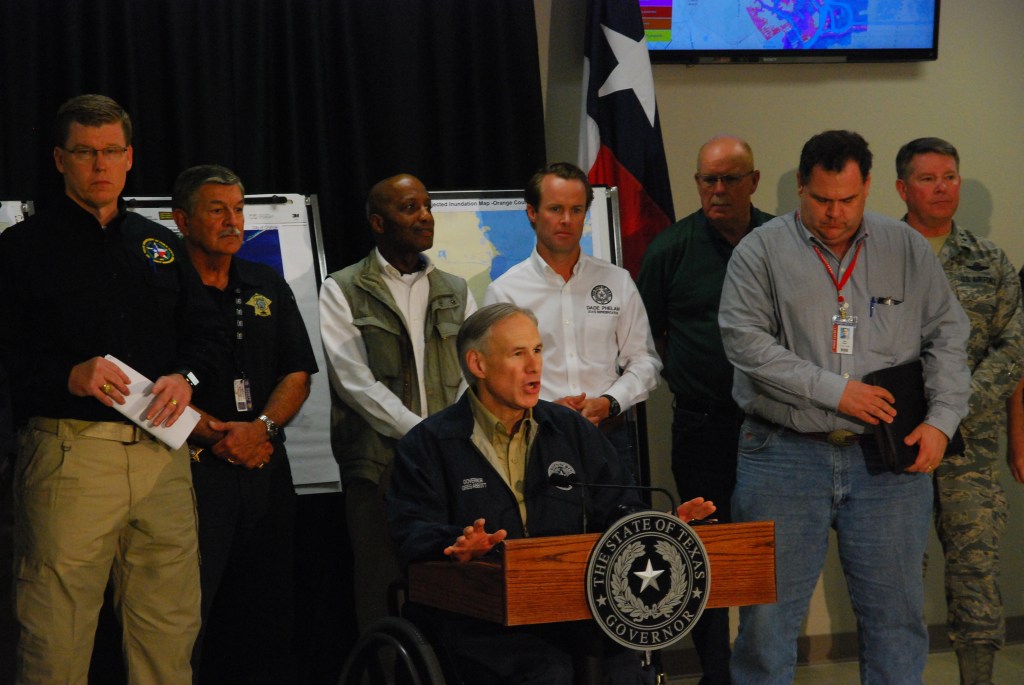 ORANGE – Governor Greg Abbott surveyed, and received a briefing on, the severe flooding in Orange on Wednesday. Alongside officials from multiple Texas counties and state agencies, Governor Abbott reiterated his call for Texans to heed warnings from local officials and avoid flooded areas as emergency management personnel continue to ensure the safety of all those affected by the floods. Governor Abbott also added the following counties to the State’s disaster declaration: Henderson, Shelby, Smith and Walker counties.

“I want the people of Southeast Texas to know that the state has and will continue to assist them with any and all challenges they have,” Governor Abbott said. “Our top priority is to ensure no loss of life. It is important for residents to understand that the rise in water is not over, and I urge you to continue heeding the warnings of local officials. I want to express my deepest gratitude to the first responders and all the volunteer agencies who are helping all those displaced during this challenging time.”

Abbott said the view from the helicopter tour, prior to the press conference, showed the massive damage and the wide spread areas affected by the flood waters.

“Water is covering everything,” Abbott said. “You see the half submerged homes and think about the families that live there.”

Newton County Judge Truman Dougharty said the areas from Burkeville to Deweyville in Newton County were affected by the disaster.

“We are still assessing the damage,” Dougharty said during the press conference. “We look at the rooftops and all the homes that are destroyed. It’s bad.”

Orange County Emergency Management Coordinator Ryan Peabody said the Eastern part of Orange was still under a major flood and waiting for the river to crest.

At this time the river is 7.47 feet and expected to crest this evening. To check the current height of the Sabine River, visit orangeleader.com

The National Weather Service is monitoring the Sabine River, which is near a crest now along Interstate 10 and Orange areas. Major flooding is ongoing in this area. The Neches River is also near a crest in Beaumont.

With the area expecting between 0.50-inch and 1.50-inches of rain on Thursday and Friday, before it tapers off on Saturday. While this will not significantly add to the river floods, it will cause localized flooding of drainage areas that typically would drain into these rivers, according to the National Weather Service.

Governor Greg Abbott said the residents showed the true spirit of Texas while dealing with the devastation brought on by the flooding waters.

“Adversity reveals character,” Abbott said. “It shows Texans has and will be ready for any and all challenges.”

Abbott also said the waters are expected to rise for another 24 to 48 hours.

“While this is challenging, it will not immediately go away,” Abbott said. “To help the agencies helping those displaced by the disaster, donate money.”

Louisiana as also been greatly affected by the flooding waters.

As a joint effort between Louisiana and Texas, Interstate 10 is closed at the stateline due to the waters on the Interstate on the Louisiana side. Once the water has receded, the transportation departments will need to check the integrity of the roadway before it can reopen.

“Texas Transportation has told me they are ready to go as soon as the water recedes,” Abbott said.

It may take up to 10 days before the Interstate may reopen.

“The water pumps for drainage did a great job up to midnight,” Sims said. “They did not fail, they were overcome and still doing the best at what they are designed to do.”

The underground drainage in the city is still a concern as the uncertainty of how much more water will come.

“We have seen water in some yards but none on the streets at this time,” Runnels said.

Hanauer said officials and city staff went door to door to 119 residents, 27 apartments and 13 businesses to notify each one of the potential risk of flooding based on damage from Hurricane Ike.

“So far, Pinehurst has been unaffected by the waters,” Hanauer said. “We hope the trend continues as the potential is still there because Adams Bayou can continue to rise 12-24 hours after the Sabine River crests.”