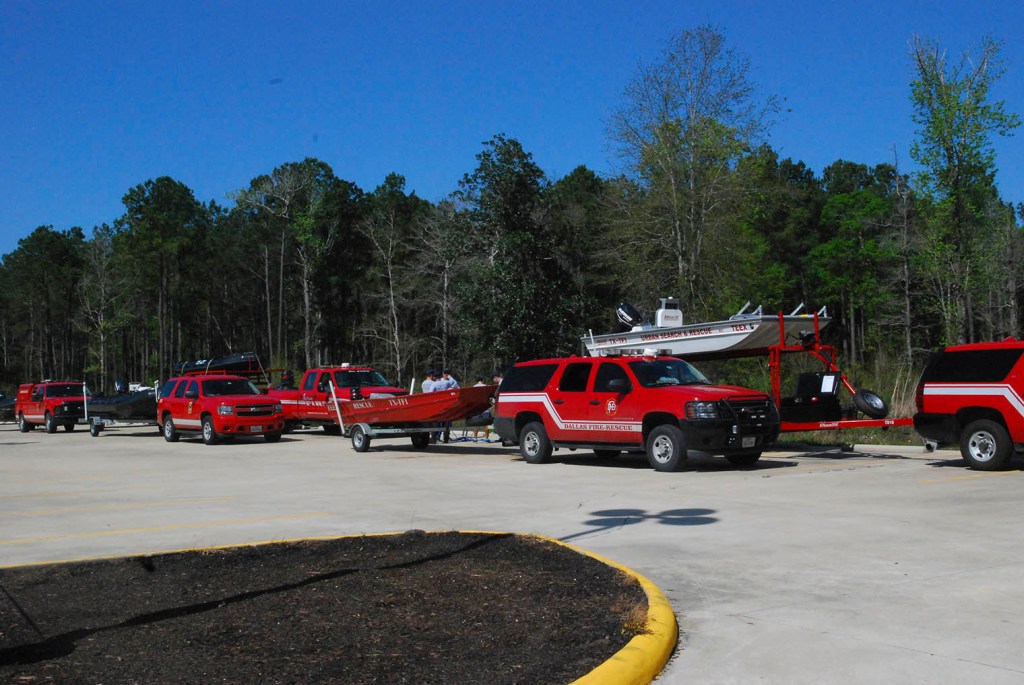 Dawn Burleigh/The Orange Leader Vehicles from Dallas Fire and Rescue lined up in the Orange County Convention and Expo Center as area residents await word for voluntary and mandatory evacuations.

Mandatory evacuations began on Tuesday at 1 p.m. for areas in Orange, Cove and Pinehurst shortly after the Sabine River floodwaters crested in the Deweyville area.

For Pinehurst, all areas notified on Monday for a voluntary evacuation are now under a mandatory evacuation. This includes residents and businesses near MacArthur Drive at Adams Bayou, 29th, 30th, 31st and 33rd Streets as well as areas of Camelot, Lancelot, Peacock, Somerset, Enchanted Oaks and Concord previously affected by hurricane Ike, according to a press release from Fred R. Hanauer III, Chief of Police/Emergency Management Coordinator, City of Pinehurst.

City of Pinehurst Mayor Pete Runnels has issued the noticed based on the latest information obtained by the National Weather Service on Tuesday.

Peabody asked residents to take the warnings seriously while comparing the initial release of waters from the Toledo Bend Damn as three times the amount of water flowing at Niagara Falls.

The U.S. Coast Guard has implemented a “Safety Corridor” on the Sabine River North of Interstate-10. This will mean that Coast Guard permission will be needed for all water operations in the affected area.

A curfew has not been enacted at this time anywhere in Orange County, but Law Enforcement will be restricting access to any of the affected areas to residents only.

Orange County Sheriff’s Office (OCSO) has increased the number of dispatchers as the call center is currently taking one call after another.

“If you see water coming up, get out,” Merritt said. “Tell dispatch you are leaving so we know no one should be there.”

Some residents in Deweyville have evacuated twice in a number of days after water flooded a larger than expected area.

Orange Fire Department Battalion Chief Joe Mires, Public Information Officer during the emergency, said the areas north of Interstate 10 were not affected by the storm surge of Hurricane Ike in 2008, and the waters were coming from the north this time.

Residents, such as Oscar Leblanc were hoping for the best.

“I was hoping for no water,” Leblanc said on Sunday as he watched the waters overflow across the parking lot on Sunday of Blue Bird’s Fish Camp on Simmons Drive. “I talked to the police and they said the area would eventually be called a disaster area.”

Texas Governor Greg Abbott will travel to Orange on Wednesday to take a tour of the flooded areas and receive a briefing on the severe flooding that has impacted parts of Texas.

As flooding continues to impact parts of East and Southeast Texas, Governor Greg Abbott on Ruesday declared a state of disaster in the following counties: Angelina, Erath, Gregg, Hardin, Harrison, Hood, Jasper, Jefferson, Liberty, Madison, Marion, Newton, Orange, Parker, Sabine, San Augustine, and Tyler. The Governor also elevated the activation level of the State Operations Center (SOC) in Austin, and is urging Texans to stay on high alert and immediately heed any warnings from their local officials related to this severe flood threat.

“Flooding resulting from historic rainfall in East Texas is having a significant impact on residents,” said Governor Abbott. “The State of Texas continues to do everything it can to assist all the counties affected by this severe weather, and my thoughts and prayers are with all those impacted. I want to thank the first responders for their quick response to this disaster and ask that residents heed the warnings of local officials, particularly concerning evacuation notices.”